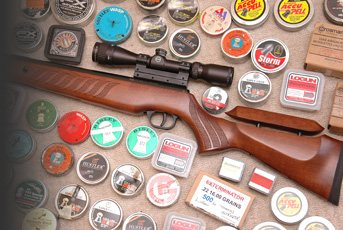 ‘Plinking’ is a term simply derived from the noise of a pellet striking a target – traditionally a tin can. That informality is the key and it can be genuinely therapeutic to sometimes just shoot for the hell of it, so to speak. Doing so for fun and pure enjoyment, with no constraints or great expectations, is the aim here. If, like me, you’re a competitive animal, then this sort of ‘pressure off’ time once in a while, makes for a refreshing change.

My schedule of Hunter Field Target (HFT) national competitions and (very occasionally these days) Field Target (FT) shoots, is of course extremely enjoyable, having been part of my life from an early age. But to some, the structured format, and indeed the competitive element itself, can be very off-putting.

For these people, their branch of airgun shooting can be happily confined to informal plinking, where the demands are somewhat less, and the equipment can be simplified to a greater or lesser degree. After all, there has always been an all inclusive nature to airgunning, and being able to just enjoy the sport on a level that suits the individual, is undoubtedly part of the attraction.

So what makes an ideal plinking pellet? Well in short, just about any can be used here but a few rules still apply, if you want to maximize the enjoyment.

Obviously, if a cheap ‘starter’ gun is being used, it’s fairly pointless splashing out on top class lead. Yet with the market awash with different brands, many reasonably accurate, relatively low cost options exist. RWS Hobby flat heads for around £3 a tin of 500, and Bisley Practise for around the £4 mark, represent good value. If most of the action will take place over paper targets, then flat headed pellets, or wadcutters as they are known, may be preferable. This design punches a clean, crisp hole in the target and can aid scoring. Milbro Match, and Crosman Premier Match are also among the options.

If shooting at informal targets, the larger calibre pellets can create a more dramatic effect, as its greater punch connects. Old favourites such as Milbro Caledonian, Lane’s Bulldogs and Eley Wasp have served their time, and still offer good value. Personally, I wouldn’t be too fussed regarding pointed designs, twin rings etc, as the conventional domed pellets will normally return better accuracy, and certainly over a greater distance. If cost is the governing factor though, and pure undemanding fun is on the cards, then really anything goes.

A trip to the local gunshop will reveal an amazing array of ammunition brands and types, which can be all rather bewildering. One way around this problem can be the ‘Pellpax’ service provided by Oasis, based in Cromer, Norfolk. These are multi packs offering around 20 different brands, individually wrapped with ten pellets of each, to allow the shooter to carry out trials. Obviously the tests will hardly be exhaustive, but it can narrow the search down considerably, and give a great indication as to a shortlist of candidates for a particular rifle.

Plinking can be great fun, but just remember to use a solid impenetrable backstop, so that safety is assured. Layers of old carpet hanging over an old door will usually make a good backstop – or a cardboard box full of old telephone books or the like, with a solid piece of wood or metal at the back.

My first pointer towards preparation doesn’t actually concern the pellet directly, but the business of barrel cleaning, which can play a significant part in accuracy.

Airguns that I have owned over the years have varied enormously in this department, with some requiring a regular clean, while others still group perfectly after many rounds. A large element of luck is involved here as to whether the particular barrel fitted has shallow rifling that has minimal connection with the projectile. Or if it’s deeper cut and sharper, which just may happen to strip more lead, or foul up faster over a given period.

Spring piston air rifles tend to throw a small amount of oil forward as part of the shot cycle, thus acting as a self-lubricating device - which in turn, should require minimal cleaning of the barrel. Pre-charged pneumatics (PCPs) are a different animal entirely, and since they derive their power from externally sourced dry air, no natural lubrication of the bore will take place. This is where a cleaning regime may need to be adopted, either as a matter of course, or more likely, if and when the groups open up and accuracy begins to deteriorate.

Many cleaning kits are sold, but the humble pull-through has to be the best bet for the airgun. I personally would never use rods or phosphor bronze brushes of any kind; favouring a far more gentle regime. The relatively mild steel used to form the majority of airgun barrels, simply doesn’t require the rigorous approach of live ammo counterparts, so a small cloth ‘patch’ pulled through the bore should comfortably suffice.

Several simple pull through kits are available on the market, but my mainstay is a home-made effort, formed from a doubled up length of conger fishing trace (plastic coated wire). This loop is fed down the barrel from the muzzle, and once it appears from the open breech, a small cloth patch (Bisley, Napier or Parker Hale .22-types are ideal) is pushed through the end loop, onto which a few drops of barrel cleaning solution are sparingly applied. The patch is then pulled through the bore and depending upon the level of dirt seen as it emerges, the process is repeated 2-3 times. I use Parker Hale 303 barrel cleaner, but again many options exist.

Pellet sizing is where the real enthusiast can have hours of fun. OK; the process can be laborious, but the satisfaction gained from adding consistency to the equation, and seeing those group sizes close up, is hard to match.

I have two pellet sizing devices, one from Airmasters 88, the other from TR Robb. They both work on a similar principle, with a finely machined steel body, incorporating a tapering central channel, into which the pellet is placed. A separate seating rod is then used to push it in to a certain depth, thus sizing its head to a pre-set dimension. The device is adjustable to set the diameter; clever stuff, and well worth a try if results are hard to come by.

Weighing pellets is something that the serious competitor may wish to consider too, in order to try to eradicate problems on longer targets, where inconsistent weights can result in a miss. By meticulously weighing a batch of pellets, any extreme highs and lows can be discarded from the line-up. Here the firearms reloading industry can help as they offer both electric and balance beam types that will weigh down to 1/10th of a grain, which is very accurate; given there are 7000-grains in a pound. Lee Precision offers a very cost effective unit for around £30.

Finally, with all these variables creeping into the equation, the rifles power could well be affected and fluctuate from its intended setting. Just cleaning the barrel can shift the zero, and velocity, so keeping a check on energy levels is of paramount importance. With this regular monitoring in mind, a chronograph would seem to me to be a vital piece of equipment these days; especially given the way the prices have tumbled in recent years. I’ve listed my favourites, but many others exist out their.