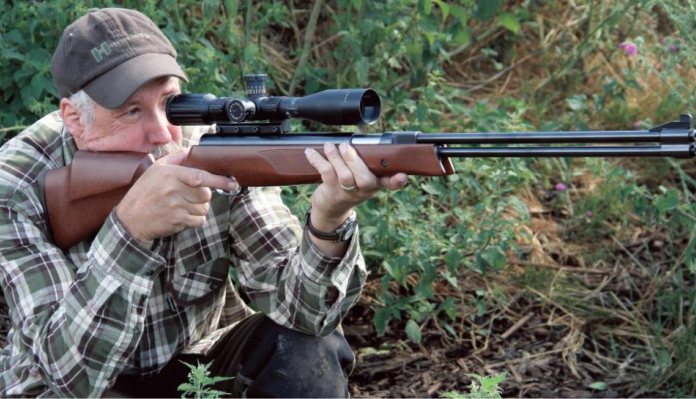 Air rifles fill a unique place in the British sporting world and offer superb hunting potential when a firearm is inappropriate. However, as with firearms, that age old question of best calibre will surely rear its ugly head as to their suitability for varying quarry species and maximum range and accuracy potential.

I shoot just as much vermin with air rifles as I do with rimfires, because I still love the challenge that an air rifle brings to the hunting experience; you have to get really close to your quarry and perfect your fieldcraft to succeed. There are four main calibres that the British shooter has to contemplate. .177, .20, .22 and .25 calibres spread a broad range of projectile sizes, weights and potential benefits for any one given species or range that they may be encountered. However, we are always governed by the legal limit for non-Firearms (FAC) rated air rifles of 12ft/ lbs, which seems a paltry sum compared to a rimfire, which makes it especially important that pellet and calibre choice is critical. In recent years, there has also been the inclusion of the larger bored air gun pellets, i.e. .30, 9mm/.357 and .45, although being specialised, the .30 cal is actually gaining a following albeit in FAC form.

The calibres that we are most familiar with are .177 and .22 that have served us well over the years, but the .20 and .25 calibres are having a bit of a resurgence, especially with more pellet choice available.

The .177 (4.5mm) is the lightest and smallest of our calibres, with pellet weights ranging from 7.0 to 11.0-grains commonly that allow a faster velocity than the other calibres within the legal limit. 7.0-grain pellets can travel at 870fps, whilst 11.0-grain pellets trot along at 700fps, when generating no more than 12ft/lbs energy. The little .177 is often considered a target calibre, which it fulfils very well but it also has real potential over the larger .22, primarily due to its higher velocity and therefore flatter trajectory. However, that little pellet has a smaller crosssectional area than say a .22 pellet (which is nearly 60% greater) and is more inclined to penetrate further, which can be good but does not impart as much striking energy, as would the larger .22 pellet.

The .20 (5mm), my favourite, offers a blend of good velocity, coupled with ballistic coefficient that retains energy down range and so hits hard like a .22, with the correct pellet. Pellet weights range from 9.0 to 15.5-grains, which transcends the heavier .177 and many of the .22 pellets. This means that you can have the same weight pellet as say a .22 pellet but in a smaller diameter but longer body. A typical 11.4-grain pellet can travel at 680fps, whilst a heavier 14.3-grain pellet can be pushed at 610fps. At 12ft/lbs energy there is not a marked advantage over a .22 pellet and the .20 only really comes alive in an FAC rated rifle at over 875fps.

The .22 (5.5mm) has always been a hunter’s first choice and for good reason, it offers a large cross-sectional area that transfers energy well into your quarry with adequate penetration. Pellet weights vary from 12.0 to 21.0-grains and, because it is probably the most popular calibre there is, a huge choice of types and makes available as well as rifles. Typically, a 14.3-grain pellets travel at 600fps whilst 21-grain heavies lumber along at less than 500fps from a spring powered gun. The heavier pellets therefore have a curved trajectory, which can be the .22 calibre’s downfall at longer ranges but are more efficient in a pre-charged gun. Still, for everyday use, at sensible ranges, the .22 is a good all-round performer with the vast-majority of guns being offered in it.

The .25 (6.3mm) has always been a ‘rat buster’, due to its very large and heavy pellets travelling at relatively low velocities compared to the other calibres but delivering a real thump at short range. Pellet weights vary from 19.0 to 310-grains and there are some speciality lighter or heavier pellets as with all the above calibres but there are fewer choices of manufacturers and rifles available. Typically, the 19.8-grain pellets travel at 480fps and the big 26-grainers lumber along at 315fps; despite these slow velocities, the big .25 does have a valid hunting role to play. As with many of the other calibres, it can be transformed when shot in an FAC-rated gun at 30 - 40ft/lbs.

This calibre, usually reserved for the centrefire brigade, is an unusual but remarkable calibre for air rifle use, if a little limited. The .30 cal pellet from JSB are a classic domed and long waisted profile, with 0.300 diameter head and 0.308 diameter skirt and weighing 50.15-grains; that’s more than three standard .22 domed pellets! Typically, a JSB .30 cal 50 grain pellet will have a velocity of 950fps for 100ft/ lbs energy when fired from a Daystate Wolverine 303 rifle. Newer 44.75-grain JSBs give an increased velocity.

Most non-toxic pellets are either a single component and profile as its lead pellet brother, i.e. H&N FTTs but made from a Zinc alloy. Alternatively, they are made from a compressible synthetic body with an alloy head section.

Modern day pellets are not always the common lead construction; non-toxic or synthetic construction can also be encountered. This is also true of pellet size; in this, I mean that the head and skirt size of each pellet must match your rifle’s bore dimensions to achieve best accuracy and velocity. Most pellet manufactures will offer each of their pellets in slightly differing pellet dimensions i.e. in .22 as the metric 5.50, 5.51 or 5.52 dimensions, so you can choose what best suits your barrel.

The most common form of pellet construction is one of a domed head, but there are also flat, pointed, hollow, and heavy weight pellet, all offering the air gunner differing performances. Domed head pellets give a good all-round performance and achieves better ballistic coefficients for down range performance than most of the other types of pellet designs. Flats are usually used as target ammo but can also achieve a good energy transfer on your quarry but at the sacrifice to longer range performance. Pointed pellet would seem to offer the hunter a better penetration potential but if it does not shoot accurately any advantage, if any, is lost. Hollow points expand on quarry from firearms at higher velocity but at air rifle velocity they have a far less expansive nature. The heavy weights hit hard and carry their momentum forward to transfer their energy into your quarry.

What should be clear is that flats are good for close range, domed are the best all-rounder as energy retention coupled with flat trajectory, and as for the pointed, if they are accurate then use them but really offer no advantage over a good domed pellet in my view. Hollow points fall somewhere between the pointed and flats, with some very accurate pellets and softer lead you can get good terminal ballistics over a domed pellet. This is an important consideration, as pellet deformity such as the flats and hollow points are often soft lead and squashed down nicely in ballistic media during tests, to give a bigger surface area and hence sheds all it energy on target in a small space of time.

The domed pellet bases blow out giving a good seal whilst in the bore of the gun and hence good external ballistics. This is very important in an FAC rated gun, where a heavier pellet is needed not only for efficient and effective energy gain, but the actual pellet need to be tough to withstand the blast of air up the backside that can damage a pellet’s skirt and thus accuracy.

Here are typical .177 and .22 calibres with differing pellet shapes to ascertain down range performance.

Heavy pellets struggle a little in spring guns but are better in pre-charged and therefore retain most energy due to momentum but their lack of velocity will result in a curved trajectory. The flat nose or hollow point retain the least amount of energy down range and are therefore better suited to close quarters or mid-range quarry encounters. The pointed pellets fall somewhere in between but were never as accurate as the domed pellets, which exhibited the best blends of velocity and down-range energy retention for cleanly dispatching vermin.

Calibre choice is very complex, but it comes down to your preference and abilities and range at which you are comfortable taking shots and what quarry you seek. Throw into the mix that spring power rifles and gas rams shoot differently to pre-charged rifles, which generally work better with heavy pellets and you add another complication. For most, the venerable old .22 will suffice for most shots less than 30-yards but the .177’s flatter trajectory will make connecting with your target a lot easier past this range. The .20 at 12ft/lbs levels is probably only just a compromise between the two but at FAC levels comes into its own. The big old .25 just refuses to die and for sub 20-yard rats, feral pigeons or other vermin, its sheer knockdown capabilities cannot be denied and again at FAC levels is efficient. I run all calibres in both 12ft/lbs and FAC rated air rifles and it is amazing how just the slightest change in pellet construction or design can influence downrange performance. I also like the .30 cal; although a little quirky, it appeals to my sense of ballistic adventure, shall we say – more please!