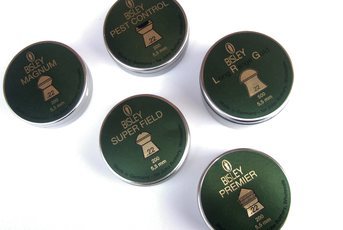 I shoot all calibres and all power levels of air rifle so I’ve known for some time Bisley Pellets can be ones to save faith in a rifle or a particular calibre set at a certain power level. The good ones sell themselves as their attributes are known by those who use them extensively. So let’s see what the distributors say about them then I’ll pitch in with my three penny worth!

The Magnum is a heavy and accurate pellet for long range use and a first class aero dynamic design for high impact and penetration. Lowest rate of lead fouling and consistent groupings thanks to the special alloy and lubrication. Recommended for all PCPs and FAC-rated air guns
Alternatively, Pest Control medium weight hunting pellets have a flat trajectory for medium ranges. Maximum shock effect and deformation. Smooth with a large hollow point.

Magnum’s need little introduction and quite frankly do what they claim. They handle power levels in .22 calibre up to 40ft lbs and the .177 loves a Beeza barrel if it can whizz down it at 12ft lb or 22ft lb. Of all pellets the Bisley Magnum in .177 takes some beating if you want a heavy hitting accurate pellet in your non-FAC PCP.

Previous to this test I’d dallied with Pest Control and yes used them in .22 calibre for feral pigeon culling. However, I didn’t know previous to test they were available in .20 calibre. So I was quick to try them in my Rapid Mk1. Results were quite surprising, as spat out at 12ft lb, I wasn’t expecting match accuracy neither did I get it but what I did receive was a flat easy to plot trajectory out to 25-yds and a fair old whack at the target. A few nights using NV for rats and it proved itself admirably. One I’m now not going to pass when I have specific pest control duties to carry out. In .22 I feel it’s a close range slug, in .25 it didn’t impress but for FAC the weight helped it hold its own against others but it soon lost accuracy as it became unstable in flight.

A good all round pellet

These pellets are serious middle weight roundhead contenders. I’ve shot these in .20 for a long time an they’re still amongst my favourites in that calibre. I like it in .22 but .25 – it pretty much does what others of this type do at 12ft lbs. However, go hi-power and it’s one to consider if punching the 60ft lb mark

A shallow top domehead pellet that pretty much does what it says on the tin. Nothing we’ve not seen before but if they suit your barrel, give them a reasonable time to prove themselves. You could be pleasantly surprised at the accuracy and consistency.

Err they’re pointed, look odd and ‘blood grooves?’ They will shoot ‘kill-zone’ groups out to 20-yds in .177 in .22 they seemed to lose the plot slightly after that – so I have to say, sorry they’re not for me.

FOR - Well manufactured, clean, well packaged and most have a roll to fulfil in airgun hunting
AGAINST - Maybe too large a choice
VERDICT - Overall the Bisley brand can’t be ignored, try them and discover that for yourself