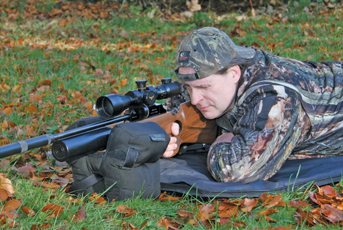 A pellet’s flight characteristics or ballistic coefficient (BC) is in essence a measure of how its velocity, trajectory and terminal energy are affected by its down range flight path due to its shape and therefore air resistance. A high BC means it should cut the air smoother and be less affected by exterior factors and might offer a flatter trajectory (despite calibre) and retain more energy at the target.

I consider this a timely article as we are on the cusp of being able to purchase air rifles able to exceed 100ft lbs in larger calibres such as .30 and .35”. Also, with rifles such as the .357 Cal (9mm) Benjamin Rogue coming along, I think we may be losing the plot about what an FAC air rifle is intended for. Daystate’s Wolverine is the coolest kid on the block. It’s already made to order in .30” calibre with ammo developed in conjunction with pellet giants JSB and set at over 100ft lbs it’ll be capable of flinging 47-grain slugs to unheard of distances for an air rifle!

BE SENSIBLE…
Back down to earth, power isn’t everything, neither is it all about the weight of the projectile. The downsides of these FAC rated PCP air rifles are very low shot counts and the fact that they are noisy – as they expel a high volume of air with each shot. The real ‘bazookas’ that come onto the scene may become a niche within a niche, as most made here will be destined for export anyway.

Noticeably almost all gun manufacturers have for a few years’ concentrated efforts on promoting FAC-rated rifles in the conventional calibres. So, what better time than now to say with the development of new airgun pellets, to seriously look at finding the best to suit your ‘sensibly’ FAC-rated machine? For a long time, most UK hi-power air rifle shooters have been content with a .22 calibre running at between 26 or 30ft lbs. I first dipped my toe in this minefield with a Theoben Rapid MkII in that spec. Many feel it’s the best compromise of power with accuracy, and you have more pellet brands that can withstand the initial boot of high power compressed air that starts the pellets journey down the barrel.

BLINKERED VIEW
At one time, many thought the only pellet that could withstand that abuse and still offer stability and accuracy was the 21.4-grain Bisley Magnum. Some experimented with the few other brands on the market at the time such as Logun Penetrators - now apparently known as Exterminators from Range Right – but more on that later.

However, this blinkered view even had me stay with Magnums, but at times I did felt the trajectory was very steeply curved. I decided I’d search for a rugged robust alternative that would give me a ‘sweet spot’ at the 30ft lb power level. In actuality at 40-50ft lbs the Bisley Magnum still excels in punch, accuracy and consistency. So I played around with zero distances from 40 – 50-yds and found the pellet wasn’t very versatile, nor are any of the ‘true’ heavyweights!

The rifle used for testing was my custom Theoben Rapid MkII with a muzzle energy of 30ft lbs FAC. Obviously a lighter pellet than the bruisers I always used was needed. I found Air Arms Field Diablo and the Crosman Dome and Webley Accupells held up well. With only a few blown out skirts and flyers but mainly I’d hit on a good level of consistency with a flatter trajectory.

800 FPS
After chrono checking the power, Bisley Magnums were generating an average of 800 fps at the muzzle. A .177 calibre 12ft lb air rifle isn’t travelling much faster and the trajectory isn’t that different, the bonus of course being the hitting power at the target! In a maximum 12ft lbs gun only 4ft lbs is required for a humane kill on a rabbit at practical distances. Therefore theoretically, step the pellet weight down, and it will retain accuracy and still have more than enough whack at the target to dispatch any legal pest species.

Despite the apparently impressive figures for FAC-rated guns never lose sight of the fact that the lead pellet does not offer the ballistic efficiency of a rifle bullet, which in comparison will be less influenced by exterior forces.

This became apparent when going over 1000-fps with certain pellets accuracy suffered considerably. However if you keep the speed sub-1000 you could find a lot better performance suitable for your rifle and requirements.

LEAD IN THE AIR
Air Arms Field Diablo (16-grain) immediately showed a remarkably flatter trajectory and accuracy. It didn’t go supersonic as a lighter pellet would and left the silencer with the lowest report yet with enough robustness of construction to withstand the power level it was subjected to.

The Air Arms Field Diablo Plus weighs 18-grains and that extra two grains makes a difference. The muzzle velocity dropped as expected but that translated to approximately only ½” below the standard Field Diablo at the previous set zero range. A slower pellet is more susceptible to windrift which meant I’d have to contend on certain days with factors that made it not that much better over the 16-grain Field.

Zero was 45-yards, so only 15-yards further could result in a miss or wounding should the wind begin to blow. I know my 30 ft/lb combo inside out using the Magnums, so using AA’s Field Diablo 16-grain was a real eye opener! There are other pellets to consider but now using the Air Arms Field Diablo’s my 30ft lb .22 calibre combo has become a much more versatile and accurate tool for longer range precision.

The following list contains recommended Pellets in .22 Calibre for 30ft lb FAC Air Rifles, depending on your needs. Do test and try others around these weights yourself, as there are many more than you’d first suppose – mostly dome heads or air bullets

AIR BULLETS
Logun Penetrator (Still around and packaged as such, when you can find them) also known as the Range Right Exterminator in two weights in .22 Calibre of 16 and 20.5-grains – a very interesting situation, and one I hope to pursue more in-depth in the future

NOTE:
The ‘Optimum Zero’ ranges are base lines but ones that will give you the most from the pellet in terms of ‘sweet spot’ in the trajectory - but remember try the pellets that suit your particular FAC- rated rifle, as most domeheads come in two head sizes, you could have quite different results.