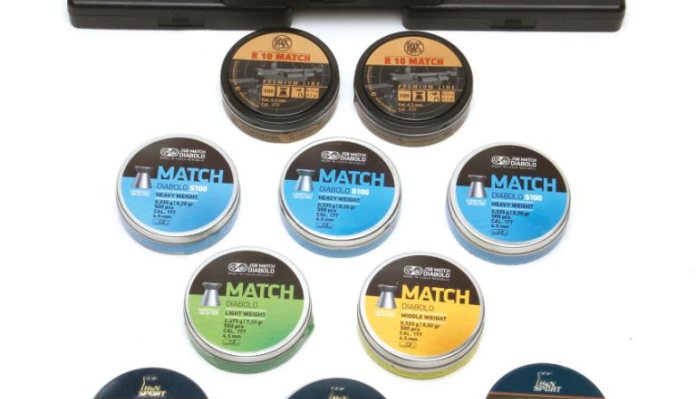 Pellets are often neglected when it comes to purchasing a new air rifle and simply what the gunsmith has at hand in the right calibre will suffice for many. But, as with everything in life, careful and due diligence will pay dividends with regards top performance and best accuracy. Switching between styles, weights and sizes can make a drastic difference to velocity and accuracy and none more so in the realms of Match accuracy.

This may not appeal to seasoned hunters out there, but everything here is relevant for all air gunners, at any level or discipline. Sorting, weighing, and perfect choice of pellets will improve you and your gun in the long run.

Also, using a superbly accurate Match rifle and pellet combination is a fantastic way to tune up your skills and techniques for pure accuracy work; as in perfecting such areas as correct hold, trigger release and breathing. With a rifle, capable of one-hole groups, it’s a great aid to sharpen these skills and also I have found a great aid to reading the wind correctly. Match pellets are seen as target items but users of RWS Hobbies will know that flat head or wadcutter designs, usually perform very well as a hard hitting hunting ammo too.

As you would expect, there is quite a good choice of Match pellets but my test was to confine the products I used to .177 calibre and three of the best manufacturers, RWS, JSB and H&N.

To eke out the very best from your individual air rifle, not only are these Match pellets available in differing weights but also differing size diameters. Each rifle has a slightly differing rifling twist, groove diameter, depth and bore diameter and so manufacturers offer slightly altered diameters that will allow you to match your ammunition to your individual gun.

The smallest difference in dimensions can make a big difference in performance, just like a small change in powder charge or bullet seating makes a difference to centrefire rifle reloads.

You may be tempted to think of the Match pellets as a target only option and as such they are, as that’s their primary usage. However, their flat-faced, sharp edged (wadcutter-type) design, originally for cutting neat holes in paper, so as to score a card correctly, is equally good for neat holes in game!

Being that all airgun hunting should use the head and neck of the quarry as the only aim point and target zones, then the Match pellet design can thus become a good shorter range stopper. RWS Hobbies have been used in this style for years, with their Match pellet heritage and as such any one of these can be used likewise, that’s what interests me.

However, for this article, I used the FWB 300 and Walther LGR to obtain the best possible accuracy from each pellet type as well. Although their velocity is not close to the legal limit, it is still possible to engage close range vermin and I used both to good effect for ferals and rats in barns, where ‘over-kill’ and thus collateral damage to windows, machinery or roof tiles is not an option.

It was interesting to note, whilst testing each pellet that they are labelled in differing sizes to best fit your own barrel, but on measuring them, the skirts and heads did not tally with the designated size on the tin. This is of no real consequence, as each pellet that was labelled a larger size was even when measured!

It was significant though that as expected a very small difference in pellet dimensions made a big difference, not only to velocity and thus energy, but also to accuracy. Both Walther and Feinwerkbau had their preferences in not only pellet make but size within that selection.

Also of interest, was that it was not necessarily the most expensive pellets that were the most accurate! Which is why we need to test each pellet, as with ammunition in rifles, to ascertain the best possible combination.

The most accurate groups from the Walther LGR at 20 yards were using the H&N Finale Match pellets, with 0.260” 5-shot groups off the bench. That was with the 4.49mm pellet size. Contrast that to the most expensive pellet, the JSB Match Diabolo Premium of the same size, 4.49mm and the group was 0.404”- just shows. Velocity was higher with the JSBs, due to their lighter 7.4-grains, compared to the H&N`s 8.2-grain weight.

The FWB`s best grouping was from the JSB Match Diabolo Heavy weight pellets at 8.4-grains and 0.306” groups, best overall. They achieved 519 fps and 5.00 ft/lbs from their 4.50mm size. Overall, it was interesting to note that best pellet size that shot the most accurate groups overall from the Walther LGR were sized 4.50mm and from the Feinwerkbau 300 SU were 4.49mm. It just goes to show that each barrel has its own preferences and needs testing for maximum performance.

Velocity-wise, the FWB liked the JSB Premium and achieved the highest velocities at 542, 565 and 561 fps for 4.8, 5.3 and 5.2 ft/lbs energy. But with the other pellets tested, the Walther largely had higher velocities. Another contributing factor to each make and type’s performance was the distribution of the weight within the pellet’s design. Some, such as the RWS or H&N, had noticeably thicker skirts that led to slightly lower velocities but good accuracy.

Here, the way the skirt opens out to fill the rifling grooves makes a difference to performance and thus accuracy, as it’s the efficiency of propulsion from the air jet that is utilised.

That’s the fascination with ballistics- it can be sometimes very obvious in its predicted nature and at the same time throw up some interesting results. If nothing else, these tests prove each gun shoots differently and to its own rules, which is why it is essential to spend a bit of time fine tuning your own personal rifle to a diet it really likes.

I grew to like both the FWB and Walther rifles, and although not my normal hunting fare, actually proved really good fun to use. In fact, despite their thirty-year-old heritage, they were still incredibly accurate when you consider it and fitted with scopes, as in the tests, become great garden plinking and close range vermin tools in my box.

One aspect of Using Match-type pellets for hunting, is that they are probably a bit more fragile than the more usual Diablo or round-headed types. Normally, they will come packaged in foam boxes, with individual holes for them to nestle into. So, you have to weigh up if it’s really worth just dumping this precision ammo into a pellet pouch, where they can all rattle around together!