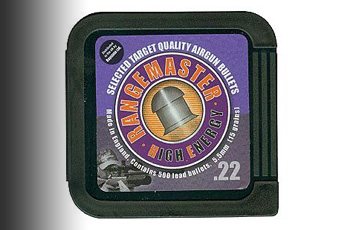 Generally speaking I am not that interested in new pellets that come on to the market, I have my favourites that do the job exceedingly well and don’t cost to much, so I just stick with them. So when I was sent a box of 500 pellets to test that cost around £18.00 per tub I viewed them with considerable indifference.

The pellets were Daystate Rangemasters HE (High Energy), a new concept in pellet design with features specifically created to enable it to cope with the kind of rough weather that the British countryside is prone to for much of the year. What particularly caught my attention about these pellets when I began to read the literature is the fact that they can cope better than any other pellet with windy conditions. Well I live on the north east coat of Scotland which is officially recognized as one of the windiest places in Europe, with hardly a day going by when there is not a healthy breeze, so I would soon find out if the Rangemaster could in fact cope with windy conditions.

My first test on these pellets just happened to be in a near gale. I first tried the pellets out on my range just to get a feel for them, firing at my favourite target - egg shells. Giving the huge amount of compensation that I normally allow for such strong wind conditions when using other pellets, I pulled the trigger and missed. Undeterred I halved the level of compensation I was using and fired again once again missing the eggshell. Surely I thought to myself the pellet could not need less compensation than half of what I normally allow, but I thought I would give it a go and offered a level of compensation that was ridiculous being only fractionally off the centre of the crosshairs and would you believe it, the pellet went straight through the middle of the eggshell. Any other pellet would have been blown into oblivion with such a minimal level of compensation. Now this little pellet had my serious attention.

By the time I set out on my hunting trip the wind had reached a very powerful 25mph plus, creating what most would consider impossible shooting conditions for an air rifle but when I lined up my first shot at a feral some 20yds away with the wind seemingly coming from two directions at once, making it difficult to see as my ghille suit whirled around my head, I felt confident. After squeezing the trigger I actually saw the pellet through my scope zinging through the air like a ballistic missile right at the pigeons head then saw the pigeon drop stone dead. Was this a fluke shot? Certainly not, I had a very successful shoot bringing down 12 feral pigeons with shots out to 35yds.

It struck me that the Rangemaster was not the correct name for these pellets… they should actually be called Windmasters. This little pellet’s phenomenal performance in the wind was however not the only feature that gained my respect; there was also the matter of energy retention and penetration. I base my selection of pellets not only on their accuracy but also on the basis of their strike impact upon the quarry, being particularly interested in pellets that dissipate large amounts of energy at the point of impact thus causing rapid death. I can not abide pellets - no matter how accurate - that zip in one side of the quarries head and out the other leaving a clinical track causing minimal injury. Unless such a pellet is placed with pin point precision it will injure rather than kill and even when it does kill, death can be protracted due to the minimal level of tissue damage caused. The Rangemaster pellets weigh 15grains apiece, which is not particularly heavy, yet it retains considerably more energy than most other pellets; that is to say when it reaches the intended target it has a lot more punch, offering the airgun shooter more strike power than they have been used to. The pellet really smacks into the quarry with an audible thud, leaving a devastating wound track that pulverises tissue - you can get a pencil into it.

Nor does the Rangemaster over penetrate, I have yet to have one of these pellets go in one side of the quarry and out the other, they seem to dissipate their energy at or just after the point of impact rather than retaining it to travel right through the quarry. You may of gathered that I was rather impressed by the RangeMaster, and so will you be if you can overlook the price and give them a go.

Rangemaster HE Pellets are available in .22 calibre only and cost £17.99.