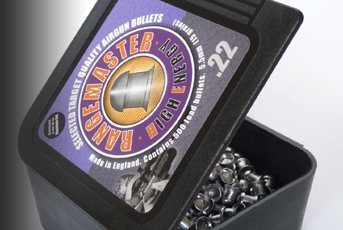 I am not interested in new pellet designs, I have my favourites that do the job and don’t cost too much, so I stick with them. So when I was sent a box of Daystate RangMasters to test that cost around £18.00 per tub I viewed them with indifference.

The RangMaster is a new concept specifically created to cope with the kind of rough weather we get in the UK for much of the year. What caught my attention is the fact that they can cope better than any other pellet with windy conditions. Well I live on the north east coat of Scotland which is recognized as one of the windiest places in Europe, so they would be put to the ultimate test…

My first test was in a near gale. Giving the huge amount of compensation that I normally allow for such wind conditions, I pulled the trigger and missed. Undeterred I halved the correction, fired and missed again. Surely the lead could not be reduced anymore? Finally I aimed just off centre and hit the mark dead on. Any other pellet would have been blown into oblivion, but the Range Masters now had my full attention.

By the time I set out on my hunting trip the wind had reached 25mph creating near impossible conditions for an air rifle. I lined up my first shot at a feral at 20yds and felt surprisingly confident. I fired and watched the pellet smack into the pigeon’s head and kill it. Was this a fluke, certainly not, as I had a very successful shoot bringing down 12 ferals with shots out to 35yds.

It struck me that Daystate should have called them WindMasters. However, their phenomenal wind performance is not the only feature that gained my appreciation, as energy retention and penetration are of paramount importance too.

I do not select pellets on pure accuracy, but their ability to hit hard and kill quickly. I can not abide brands that zip in and out and leave a minimal would track and do little serious injury. Unless these are placed with pin point precision they will injure and even when they do kill, death can be protracted due to the minimal level of tissue damage caused.

The RangeMaster retains considerably more energy than other pellets; that is to say when it reaches the intended target it has a lot more killing power. It really smacks into the quarry with an audible thud, leaving a devastating wound track that pulverises tissue - you can get a pencil into it.

Nor does it over penetrate; I have yet to have one go in one side of the quarry and out the other. They appear to dissipate their energy at or just after the point of impact rather than retaining it to travel right through. You may have gathered that I was rather impressed by the RangeMasters, and so will you be if you can overlook the price and give them a go.

For: PGreat wind bucking abilities
Against: Expensive
Verdict: If you want maximum results then these are the best