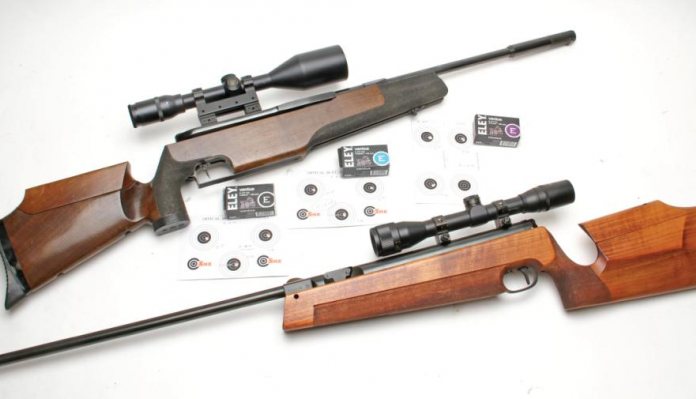 Eley has been part of the British shooting scene for over 190 years and innovations in rifl e, pistol and shotgun ammunition have kept them at the pinnacle of their game. Today, their rimfi re ammunition is synonymous with excellence in the fi elds of Target, Bench Rest, 10m and Biathlon, not to mention accurate and effective hunting rounds.

Now Eley has seized the opportunity to delve into the ever-increasing interest in the Ventus, although some other manufacturers offer individually packed pellets too. Regardless, the head and skirts of the test pellets were largely without dings or dents and seemed very uniform in the measuring procedure. One curious thing was the weight was incredibly uniform but was 8.4-grains not the 8.2-grains as stated. I used several differing scales, electronic and old style beam measures but got the same results. Knowing how fi nicky target airgunners can be, I wonder to their reaction?

Combined with the very clean and precise nature of the pellets, you can rest assured that only the diameters are a factor in choosing the size that is best suited to your barrel and not any imperfections. In other words, once the perfect size is found, you can then just buy more of the same size/colour coded Ventus, with the knowledge that they will perform the same.

One more interesting point, is that all boxes have a lot number and that can be inputted or scanned to bring up details of that lot number from Eley’s website and how it performed when they did their in-house tests. This showed that the for example; the lot number T01366Q, the 4.51mm Ventus were made on Feb 5th 2018 and had a standard deviation of only 0.86” radius of groups shot at 10m. Test barrels one and two showed ten shot groups of 0.27, 0.26 and 0.25” and 0.31, 0.28 and 0.24” respectively.

Its very impressive that Eley allow open test data to be made readily available to its shooters and further enhances the confi dence in using their pellets. Accuracy-wise, what can I say, it’s diffi cult to measure one hole groups! Both the Walther and Feinwerkbau rifl es shot very small group sizes and also impressive considering their age, although both were serviced by N Clarks Gunsmiths. Like Eley, I had incredible groups at 10m with the Walther averaging 0.28” and the Feinwerkbau at 0.26” for all three pellet sizes.

Velocities were all very similar and energies of 5.9 or 6.0 ft/lbs were very consistent. The Feinwerkbau really liked the 4.50mm mid-sized pellets, as it shot tiny 0.23” groups at 10m with the highest velocity too at 578 fps for 6.2 ft/lbs. The other two sizes were very close behind at 0.25 and 0.29”, for the 4.49 and 4.51mm pellets respectively. But any of the groupings you would be proud to shoot.

I also tried them in the Feinwerkbau Mod 65 pistol at 10m and achieved incredible group sizes with an old Simmons Whitetail Classic scope fi tted and shot off the bench. Being a rifl e scope, the eye relief was only three inches, but accuracy was an average of 0.33”! Best groupings went to the mid-sized Ventus again of 4.50mm with 438 fps and 3.6 ft/lbs for 5-shots into 0.30”, blimey who needs a rifle.

Priced at £14.99 for 450 pellets from Donaldson’s Gunsmiths of Bletchley, that works out at 3.3 pence a shot and, considering the high degree of precise manufacture and obvious consistent accuracy in the test for a variety of guns, I would have to say that’s money well spent. Some hunting pellets please next!