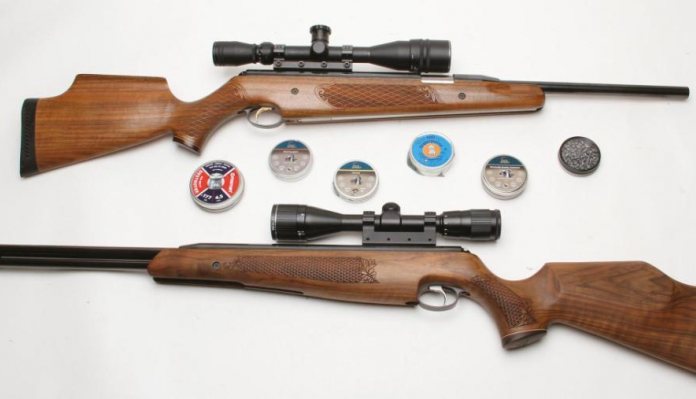 Air gun pellets have pretty much stayed the same for years, decades even. The traditional styles such as domed, hollow, flat/wadcutter or pointed still remain but now you have the choice of lead-free, polymer-tipped, copper-washed or synthetic pellets. Many have been tried before and are not really new but today you have a far greater choice of what you put into your airgun’s barrel.

Some are definitely aimed at the younger market, or visually stimulated shall we say, but some have real merit. There has also been an increase in larger sized or specialised calibres too like, .25, .30, .35 and even .45 and the whopping .50 cal. This article is an over view of the more common ones and what`s new on the market and how they perform.

There has been a spate of tipped pellets of late, which offer the airgunner a new design to play with. Visually they are very appealing, giving an instantly recognisable shape that usually has a pointed and in some cases very pointed design. This is obviously aimed at the hunter market but whether they offer any better penetration we shall see. These commonly have a lead base of the traditional hollow point design, into which a polymer or metal tip is inserted. H&N’s Red Scorpion and Hornet are such.

The Red Scorpions are very striking; as the name suggests they have a Red Tipped pellet that is pointed but with a semi round tip and made of a polymer. The Hornets however have a very sharp metal tip of brass.

Both designs have a small head section into which the tip is inserted on a longer sprue and then there is a short neck before a long shallow angled tapered base. Their base has quite a thick rim though, so can cope with a high pressure or blast of air, so as to seal the lead skirt into the rifling and therefore good efficient propulsion.

The Hornets are well made pellets but I did find some oddities in the tins, with the tips being angled to one side or inserted wonky, so worth a visual check before you load. For comparison I shot some standard pointed types to see the difference between the two, RWS Superpoints were used and the results shown in the tables for accuracy and penetration.

One other tipped design was Gamo’s Zombie Tracker! Aimed at the younger generation, or Zombie fan, these are lightweight lead pellets with a green hard pointed tip that glows in the dark! They do actually glow when a light source is shone onto them and then removed, more gimmick than practical but what the hell. They have a very shallow head and long tapered skirt with a slim rim, so will seal very quickly into the rifling but might distort too.

This design has not really changed much over the years with just varying sizes of hole in the nose! Several new designs now offer a variation on the theme, firstly the Crosman Destroyer is really a hollow point with a raised central lead peak to it, looking like a polymer tipped pellet but made of a one piece lead construction. The H&N Barracuda Hunter Extreme has a cross hatched hollow point, like the old ‘dum dum’ design. A central hollow has four radial cuts to allow four petals to expand on impact. The H&N Grizzly are totally different and resemble a regular .22 rimfire bullet. This has a short length and domed base and serrated hollow nose. I used these in several .25 cals and that’s what I tested here.

Interesting, I think is the answer here, as with some lead -free pellets I tested last year, results were variable to say the least! It`s that same adage of that a rifle will tell you what it likes and with these pellets that is very true, the test rifles loved some and hated others. Just to check, I tried several same calibre rifles to ascertain any differences.

The tipped shot well in the Venom Hunter and in .177 in the Air Arms TX200 or the Prosport with respect to velocity, energy and accuracy. The only oddity were the H&N Hornet .177, which despite not being loose or over sized did not achieve good velocities in either the Prosport or TX200HC but accuracy was very good at 0.53”, in fact the best.

Second best tipped was the control RWS Superpoint in .177, with good velocities of 794 fps/11.5 ft/lbs energy. Joint third were the H&N Red Scorpion and Gamo Zombie Tracker, both in .22 with good velocities, energy and accuracy. The .22 cals were not far behind in accuracy but gave the best energy figures in the test, with Superpoints and Hornets performing well.

Here we had a spread between .177, .22 and the big old .25 cal. Again, tightness or a loose fit were the problems here but worth knowing. That`s why I also tested the .25 cals in an FAC-rated Patriot rifle. Best accuracy went to the H&N Barracuda Extreme pellets in .22, this time with good 0.65” groups at 25 yards.

The .25 pellets are always an issue, as barrels can vary in their internal diameter. I used a BSA Lightning Tactical and a Steve Harper custom HW90, both of which would not shoot the Grizzly pellets, as they were loose. Whereas the Barracuda Hunter Extreme was too tight in the Harper and BSA barrel and were not consistent. Velocities were woeful to say the least, as was the accuracy of the Grizzly and only the Pest Controls gave some semblance of accuracy from these sub 12 ft/lbs springers. Precharged would no doubt fare better.

The .25 calibre pellets are obviously aimed at the FAC-rated market, so I tried them in an old Webley Patriot .25 rifle. It upped the game to 508 fps/17.8 ft/lbs for the Grizzly pellets that this time actually fitted the barrel and accuracy was amazing at 0.58” at 25 yards admittedly but shows potential.

With the Barracuda Hunter Extreme, the velocities rose to 543 fps/18.6 ft/lbs and accuracy was even better at 0.47”, a big old hole! Finally, the Pest Controls shot 574 fps/22.7 ft/lbs but bigger 0.81” groups. This is top energy for the Patriot, as it was de-tuned to 20 ft/lbs, as it shoots better that way, as the Grizzly and Barracuda’s showed.

I like the design of the new tipped ammo and the more flamboyant hollow point designs but whether it increases performance, it`s up to you to make of the results what you will. What was evident was that some pellets just would not shoot and some shot better than the controls, you have to test stuff to see how it works in your gun. Soon, I will be testing a whole range of pellets into ballistic media to see if penetration, wound channel and striking energy and expansion are better.