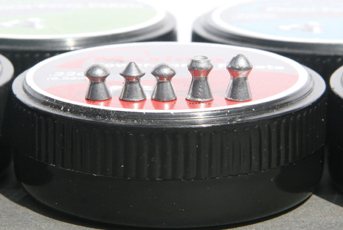 Like other airgunners I noticed the press release concerning Paul Schietaert winning Gold in the Yorkshire Bench Rest Competition using Maxima Power-Force pellets from Henry Krank Ltd. I was intrigued because Krank’s until relatively recently haven’t shouted too loudly about them or to my knowledge ever marketed ‘own-brand’ pellets before.

Apparently, the company asked him to try their new pellets, he obviously did and I’m sure he’s glad of it as Maxima’s in .177 cal helped him achieve his success in the 2012 competition. To save on repetition, all have ‘Power-Force Pellets’ after the name that is given below. All are packaged in strong plastic tubs with screw-off lids. Close inspection shows these are quality pellets and picking out 5 or 6 at random from a tub I found they gave a high level of consistency in weight, proﬁle and dimensions. There’s a few from the range omitted here namely the ‘Sport’ and ‘Hunter Plus.’ The former a standard ﬂathead design the latter being a heavy-weight version of the Hunter.

Field
Stated: ‘Domed pellets for FT shooting’
Weight: .177 7-grain .22 14-grain
Verdict: A good domehead pellet that is light in the lower calibre and pretty much medium weight for a .22 slug. I found they performed well in most of my air riﬂes. A pellet suited to hunting as well as any other air riﬂe shooting discipline. Any airgunner using a 12 ft/lb air riﬂe should try these – both calibres gave good accuracy out to 40-yds when used in all my PCP’s.

Hunter
Stated: ‘Pointed Pellets for long distance hunting.’
Weight: .177 7-grain .22 14-grain
Verdict: Pointed pellets I think are a matter of personal preference. My views have changed toward the design as quality has improved but I still feel with any brand keep the range sensible. These being no different in that respect and if you are one who prefers the design they’re no slouches.

Maxima
Stated: ‘Heavyweight for hunting and FT.’
Weight: .177 8-grain .22 16-grain
Verdict: This ‘rounded’ head design is slightly more ‘shallow’ at the head in proﬁle yet I attained the best groupings at 30-yds using these in both springers and PCPs at 12 ft/lbs. A serious contender for the price and of all here featured it’s the one I’d recommend hunters try ﬁrst and foremost.

Crow Magnum
Stated: Heavy hollow point pellets for long distance hunting’
Weight: .22 19.3-grain
Verdict: As you’ll see by the close up shot of the pellet proﬁles – this and the last designs featured for test are much longer than the others. In .22-only – the lid correctly proclaims ‘heavy hollow point’ which they are but ‘long distance hunting’ - I’d say keep it medium range and you can go from 12 ft/lb to FAC power levels up to 26 ft/lb to deliver ‘clout’ with kill-zone accuracy. A pellet I used ‘real time’ recently for a feral cull using a 12 ft/lb springer when these dropped everything from roof and rafter.

Magnum
Stated: ‘Extra heavy pellets for hunting and FT shooting.’
Weight: .22 .20-grain
Verdict: Another .22-only pellet, seems strange FT is mentioned as recommended usage but for FAC use up to 30 ft/lb I’ve no qualms in saying give these a try. Again a lengthy design but suits most ‘enclosed’ magazine systems. They deﬁnitely are too long for use in most open ‘wheel’ designs though.

FOR
Quality of manufacture, build, well packaged and well-priced

AGAINST
Not a Lot