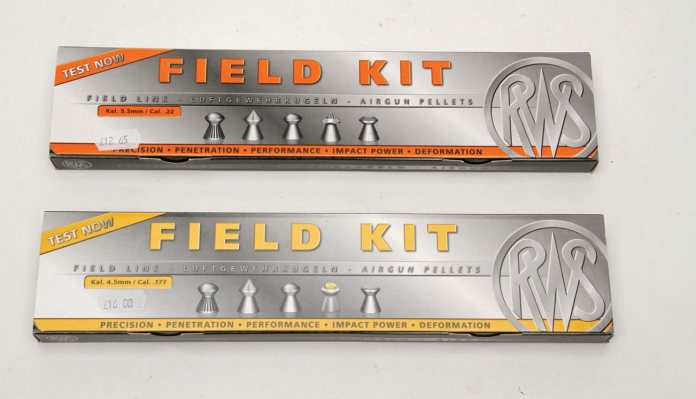 The age-old question of the correct projectile persists whether it be a shotgun, rifle or air gun. Choosing the best, most accurate or highest velocity product is everyone’s aim, to literally achieve the best load for your particular rifle.

The trouble is, one gun, even from the same make never seems to shoot the same projectile the same due to small tolerance differences in the barrel steel and bore. With an airgun, it’s simpler, as you only have a lead slug. A single pellet of differing brand, shape, weight and outside diameters is all you have to go on, but boy, are there a lot of choices! Although cheaper than firearm’s ammunition, choosing the best pellet tin by tin can still get expensive.

That way, you can sample a selection of pellets and if they shoot well you can buy a quantity of that type and if they do not work you have only wasted 200 or 100 pellets, which can be used for another rifle any way. I weighed ten pellets from each group and type for an average and then shot 5-shot groups for each type at 25 yards for accuracy and velocity. (see table 1)

I used an old Venom custom Lazaglided HW80 in a Gary Cane Maple thumbhole stock that looks as good as it shoots in .22. For the .177, an HW95 custom, again really nice and a superb shooter in .177.

All testing was off a bench and sand bag with a loose hold to let these springers do their thing, although each were superbly smooth to shoot and with little recoil.
First up, were the .177 contingent. A good range of pellet styles and weights to suit anyone’s preference for a flat, rounded pointed or exotic type designs. As you would expect from RWS, the quality of the product’s forming was superb, crisp and clean with very uniform weights and head/ waist sizes. This all translates into good groups down range and I weighed each type for a true weight reading, as it slightly varied from that on the tin, as expected.

The Superdomes are your typical English Bulldog form of pellet, with a domed top and grooved waist and has a good all-round aerodynamic form. At 8.4 grains, I had 774 fps velocity for 11.2 ft/lbs of energy and really nice consistent 0.46” 5-shot groups at 25 yards.

The second pellet was the SuperPoint Extra, which is a pointed design but with a good overall weight distribution for retained energy down range. Slightly lighter than the Superdomes, at 8.2 grains, I had a healthy 781 for and 11.1 ft/lbs of energy and 0.58” groups. Usually, pointed types do not impress me, but these shot very well!

Superfield are a stable pellet among hunters and are also a heavier domed type that PCP rifle uses like. Equally good in a springer I had a weight of 8.6 grains for 768 fps and 11.3 ft/lbs with 0.56” groups. Another great performer and will slightly buck the wind better too. The Power Ball were up next; I wasn’t expecting much, as it’s a bit over the top in design with a coated steel ball seated into a hollow point lead pellet! Boy, was I wrong, it shot and was the best tested! It just shows that you need to test a variety of pellets and that’s exactly why RWS have produced these field kits. I had the Power Ball at 9.2 grains and 726 fps velocity and 10.8 ft/lbs achieved 5-shot groups of 0.37” from a springer, blimey! Finally, the Supermag, as the name suggests, is a heavier pellet again at 9.2 grains and has a flat nose or wadcutter design. High energy transfer and match accuracy at 731 fps for 10.9 ft/lbs and 0.56” were the norm, so a great ratter pellet me thinks.

The .22 RWS pellet selection were equally consistent but a little less accurate and more what you would expect from a spring gun at 25 yards. The Superdomes at 14.6 grains showed a healthy 607 fps and 11.9 ft/lbs of energy from the Venom HW80 and nice 0.54” groups. The Super Point extras too at 14.5 grains and 599 fps and 11.6 ft/ lbs shot 0.70” groups, which is good for any pointed pellet and shows that RWS have got it right.

The Superfields at 16.0 grains were great with sub half inch groups at 0.48” with 547 fps and 10.6 ft/lbs energy, a little down on velocity but still a good pellet. The Power Piercing pellets are unusual, as in .22 cal they take the form of a hollow point style with a long thin lead spike in the centre. The idea is to have the advantages of a pointed (penetration) and hollow point (expansion) build. At 13.8 grains weight they flew at 608 fps for 11.3 ft/lbs of energy but refused to group in this rifle. Again, that’s why this selection pack is good; it customises a pellet that’s right for your rifle, and or might work in the next one. Finally, the Super H Point, which is a classic dome but with a hollow point for good accuracy, at 0.77” at 25 yards and a velocity of 603 fps and 11.5 ft/lbs of energy.

I really enjoyed testing these selection packs from RWS and they are a really good idea for those seeking a cost effective way to achieve the best accuracy, energy and consistency from their individual air weapon. Cheap in real terms and they will save a lot of trips to the gunsmith for another tin of pellets, highly recommended.