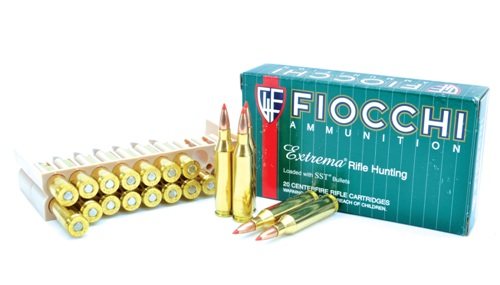 243 Winchester must surely be the most favoured cartridges for fox and deer control in the UK. What I have here is Fiocchi’s load that uses a 95-grain Hornady SST (super shock tip) bullet. Its weight just squeezing within the likely stability/ accuracy envelope of most 243 rifles’ 1-10” twist rate. Although not compatible with Scotland’s 100-grain rulings, it performs well on foxes and smaller UK deer although does have a reputation for expanding a bit too quickly for some tastes. Which almost certainly rules out its use on large woodland stags where generally, a bigger calibre is preferred! Hornady describe the impact characteristics of the SST as ‘dramatic’ and I tend to agree.

Boxed in 20’s, the cardboard sleeve makes no printed claims for velocities or ballistics. Although sounding distinctly European, it is assembled by Fiocchi in the USA and the first marked characteristic is the durable polymer inner that holds all rounds securely, yet remaining easily accessible to a fingertip. Too many ammo boxes just disintegrate as soon as they are opened so off to a good start!

The cannulured bullet is seated but not crimped in place to meet the C.O.L. (cartridge overall length) specified by Hornady of 2.610”, measured consistent to within 0.003” over the 20-rounds inspected. The bullets I pulled all fell within the +/- 0.1-grains specified. The charge was fairly light at 35-grains of dark coloured, uniformly sized and shaped ball powder. Very likely double-based with Nitro-glycerine as well as Nitrocellulose and was almost certainly of a faster burning recipe as due to the lower charge weight. Case mouth prep looked excellent with no dings or burrs at all on the neatly chamfered rim.

Over the chronograph, 2844 fps was averaged from a 24” barrel with an extreme spread (ES) of 31 fps, no great concern on a hunting load, although perhaps 100 fps slower than might be expected of an average 95-grain loading (Hornady show 2950fps for their standard load with this bullet). Accuracy remained comfortably stable and repetitive in the 1⁄2 - 3⁄4” bracket for 3-shots at 100 metres.

The sharp polymer tip and secant ogive of the SST provide a 0.355 G1 Ballistic Coefficient (BC) for decisive longer range shots, especially if engaging foxes or corvids. Unlike other SST models, the 6mm/.243 variant doesn’t show a boat tail! However, it does conform to the breed’s standard of an Interlock ring to bind the jacket and core together beneath the cannulure, controlling expansion and limiting jacket separation on impact. I would rely on a 200 yard zero providing ballistics of 1.6” high at 100 yards and 2.6/5.9” low at 300/400 yards although, comparatively stable in the wind alongside a 22 centrefire for vermin control.

FOR: Reliable performer Consistent loading tolerances A serious contender
AGAINST: A little slower than the competition SST bullets can be a bit destructive
VERDICT: A reliable new performer offering a brand of US and European technology