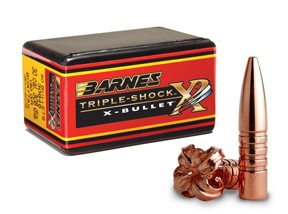 I have to admit to not having a lot to do with Barnes Bullets, but with GMK Ltd announcing they had taken on the UK agency I decided to have a closer look. What really got me interested was a recent trip to Croatia after wild boar, where you do need a tough, premium projectile that can go deep through heavy skin, muscle and bone without breaking up. Plus it has to do the damage and exit to give a perfect pass through. As I am going to build a 300WSM boar rifle, fodder of this type was a priority. This and the fact my 8.5x63mm Mauser M 03 barrel is imminent and this larger calibre would probably become my big game rifle; again requiring premium bullets. This brief feature is more a look at what’s on offer, as I now have Barnes in a number of calibres and types and will be doing some load development for the immediate future.

Fred Barnes started making bullets 75 years ago for his own use, as he was dissatisfied with what was commercially available. He also supplied them to friends and such was the success of his designs that he formed a company. In 1974 it was purchased by Randy and Coni Brooks and as they say the rest is history. Randy’s contribution to the name came with the invention of the X-Bullet, which uses solid copper construction with no lead core. Tough and strong the X uses a thin hollow point cavity with a pre-notched ogive that peels back into four, razor sharp petals as it enters the target. This as can be imagined makes for some devastating terminal and internal ballistics, and fulfils the aims of a decent game bullet with good/fast expansion, excellent penetration and mass retention and shock effect, plus a near 100% integrity that will ensure a good pass through.

As we shall see the X-Bullet concept has been refined with various specific designs, though Barnes still offers its Original range, which uses a heavy copper jacketed soft tip format, these are still popular.  Newer is the Banded Solid, which as the name suggests are just that; made from a homogenous copper/zinc alloy they are near indestructible and much favoured by big game hunters. Oddly they start at .224” calibre and go all the way up to .50. The smaller stuff is doubtless for pelt hunters who don’t want to ruin skin.

Though the Originals and Solids have their place, for the majority of our needs it’s the Triple Shock X-Bullet (TSX) and the new Maximum-range X-Bullet (MRX). New too and at completely the other end of the scale from these near indestructible, all-copper designs is the tiny Varmint Grenade. In .224” calibre/36-grains only, this thin-walled, jacketed hollow point is designed for animals like squirrels and ground hogs, and gives explosive results on contact. Doubtless too light for foxes, but certainly of use and interest.

The standard Triple-Shock X-Bullet is distinguished by the three grooves around the bearing surface, which reduces pressure and fouling problems. They are available in boat tail (BT) and flat base (FB) styles and in calibres from .224 to .50”. I have some 53-grainers for my 223 Rem and also some 185-grain .338s for my 8.5x63mm. The .224s could be a very useful alternative projectile for roe, CWD and muntjac, as the current crop of bullets are more of the varmint-type and tend to do a lot of peripheral meat damage. I have to say I have high hopes of these in my 223 M 03 barrel set. I have also ordered some of the 120-grainers for my new 6.5 Grendel/CZ 527 custom rifle, which again could prove ideal…

Far more technical is the MRX. This strikes a balance between the standard X-Bullet design with its all-copper hollow point build with a long range ability brought about by its streamlined ogive with Delrin tip that gives a high ballistic coefficient. Similar to the Nosler Fail Safe the rear section is not solid copper, but lead alloy-filled (Silvex) to make the weight. This is said to give optimum ballistic performance and maximum down range retained energy characteristics. Currently these are only available in 270, 7mm, 30 and 338” , but I would assume that other calibres will be added. I have some 150-grain, .30” cal MRXs for my 30-06 to see what they can do. Something I have yet to see is the XLC Coated X-Bullet, which offers a non-moly, dry-film coating.

The choice of Triple-Shocks (calibres and weights) is good, which is the bread and butter bullet no doubt. Though not having yet fired any in anger, talking to those that have gives the impression that Barnes do make a highly effective product and I am looking forward to load development in a number of calibres.

As well as the bullets Barnes offer a reloading manual, which I am told has recipes specially developed for the needs of their projectiles. They also offer their CR10 bore cleaner, which will lift off both copper and heavy fouling deposits. They recommend that any rifle is given a good clean out with CR10 prior to using their bullets.

In terms of ability the most telling factor is the number of ammunition companies that opt for Barnes bullets. Much in the same way that Swift, Nosler, Sierra and Hornady are also used. Barnes supply Black Hills Ammunition, Cor Bon, Federal (Vital-Shok and Cape-Shok), Norma and Weatherby with various types, weights and calibres.

Once I get their data manual I shall be starting on the reloading route to see what they have to offer. Plus it will be interesting to see how they perform compared to other brands of premium projectile.