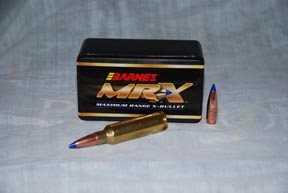 As a keen reloader I’m always up to try something new and over the last year have tuned into Barnes bullets. Perhaps the best is their solid copper hollow point - the Triple X (TX). Tougher than a comparable lead-cored design it has the strength to penetrate and pass through big and tough game with ease, without losing any mass. But the HP design peels back the ogive (bullet nose) into four identical and razor sharp petals that increase the wound channel and cause fatal, internal damage. It is also effective on smaller species and doesn’t create a lot of unnecessary peripheral tissue damage either.

I have used TX with great success in my 8.5x63mm, which is more a short/medium range rifle, but I also like to take on the long shots and Barnes had the answer in their new MRX (Maximum Range X-bullet).

Whereas the TX is a simple design; the MRX is a far more technical projectile and consists of a solid copper, boat tail body with three groves cut into the bearing surface and a slim hollow point cavity topped off with a blue ballistic tip. Weight is achieved by a hollow base filled with a heavy lead-type alloy, which is similar to the old Nosler Fail Safe.

The idea is to give a ballistically efficient long range projectile that offers all the terminal effect of the TX. As can be seen the build seems to offer this and live fire tests proved it.

The only .30” calibre I currently use is a custom Winchester Model 70, chambered in 300 WSM. It has a medium heavy 23.5” barrel with the action bedded into a Wild Dog stock. I normally use 180-grain Winchester Supreme Fail Safe ammo, but decided to see how a 150-grain MRX would do. Recoil would be down, the trajectory flatter and velocity/energy higher.

Bullets come individually compartmented in a foam liner in boxes of 20. Taking an average they weigh 149.52-grains and show a diameter of .3073”.  The load I chose for the WSM was from the latest Hodgdon manual using 60.5-grains of IMR 4895 with a large rifle primer. Each charge was thrown low and trickled to weight. Barnes don't give a COL (cartridge overall length) figure; though suggest bullets are set back a fair way. I picked a COL of 2.840” taken from the Hornady #1 book. Loading was no problem, though I ended up chamfering the inside of the case neck as slim rings of copper were shaved off as they were seated.

Testing was done prone supported at 100 yards, at this distance it was printing ½” and generating 3158 fps/3314 ft/lbs. The extreme spread was a mere 7 fps, which taken as a view to the load overall is the sort of figure we are trying to achieve. This sort of performance fills you with confidence for the longer shots.

The true test of a hunting load is its terminal performance, as overly frangible bullets of any calibre can mess up an awful lot of meat no matter how big or small the animal. As luck would have it I used the MRX first on muntjac; too much gun no doubt but with a behind the shoulder shot both animals went down instantly. Despite the large amount of energy the MRX carried, peripheral meat damage was minimal. Even with these small deer the bullet mushroomed and punched a big square hole thought the ribs as it exited.

These days I tend to favour bullets of a heavier construction which kill large and small deer alike with what might be termed as precision both inside and out. Barnes MRX is a good bet if you favour that sort of long range ability and terminal performance. Probably the only thing against them is the price, which at £30 for 20 makes them VV expensive, ouch…