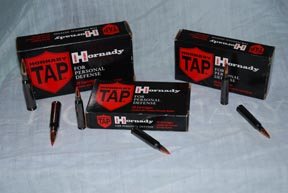 As a projectile, ammunition and reloading equipment manufacturer Hornady needs little introduction. Though I use lots of different brands of bullets and factory ammo their products are always among my first considerations. So let’s turn our attention to what must now be two of the most popular calibres in the UK – 223 Remington and 308 Winchester. The 223 is favoured by fox and muntjac shooters and roe in Scotland, Practical Riflemen (PR) and even some of the target fraternity, as this little round has come a long way from the original 55-grain FMJ M193 military load. Likewise 308 is appreciated by the target buffs and must be considered probably the ultimate all-rounder for the deer hunter.

Hornady do all the normal 223 and 308 stuff, but what caught my eye was what on the surface appears to be a military/tactical-type load. Called TAP FPD (For Personal Defence) we are told it’s the choice for tactical teams, snipers and police officers throughout the world due to its flawless performance. Now it’s available for the civilian market for personal defence needs in the USA, where they have a far more realistic attitude to firearms use and ownership as well as the rights of the individual… For we Brits they are target or field loads according to your needs.

The whole point of TAP is to offer an effective, reliable and consistent round of ammo. To do this it uses Hornady V-MAX, HPBT Match and A-MAX bullets of different weights loaded into a distinctive black nickel-coated case. This reduces problems with corrosion and makes for highly reliable chambering and extraction. Propellants are engineered to protect your night vision by minimizing muzzle flash too.

Down, Test and Adjust

For testing I used the following rifles – an 18” SGC Speedmaster AR15 with a 1 in 8” twist and a 24” Thompson Center Icon. As ever the brief was zero, shoot for group at 100 yards and then over the chrono for the facts and figures. I also stripped a random selection of ammo to check weights etc.

The bullet is the flat/bevel based V-MAX that averages out at 59.75-grains. Powder is 24.2-grains of what looks like Hodgdon BLC2 as it shows an identical, flat, spherical shape. A quoted velocity of 3115 fps is printed on the box, as are bullet drop increments of 100 yards out to 500. However, from the 18” barrel it was averaging 2824 fps, I imagine that the extra two inches of tube would put this figure up around the 3000 fps area. The extreme spread (ES) was just 12 fps and accuracy was excellent with an easy ½”. The cartridge overall length (COL) was 2.226”, so no problems in the magazine.

Hornady in their manual quote the use of a 20” 1-9” twist barrel for the 75-grain and I have never found this weight, no matter what the make to shoot ½” or below in my 1-8” twist gun. Bullet weight averaged 74.82-grains and generated 2596 fps with an ES of just 5 fps. The velocity is under the quoted 2700 fps; again some of this is doubtless down to the shorter barrel. Group sizes hovered around ¾”, which is not bad, however the weight and shape does offer good down range ability. Powder was a short green stick that looked like Hodgdon H4895 or the equivalent IMR version. COL was 2.245”; again magazine compatible.

With both these loads in a hybrid, straight-pull action, which is by far the most critical mechanism for primary extraction there were no problems at all in chambering or extraction, with both powder choice and case coating contributing to the slick action no doubt. I have found with the heavy 75-grain load in some other makes the extra bullet weight does tend to put pressures up a little and exacerbate the problem but not with the TAP FPD.
Different direction

Though not initially planned I decided to test these two loads in my Mauser M 03 bolt-gun, which has a 20” 1-10” pitch barrel and the results were surprising. Normally I use a Hornady, 60-grain flat base soft point over 24-grains of Vit N 140, which will shoot into ½”. The 60-grain TAP did about ¾-1” and the 75-grain, which I did not think would stabilise at all, did sub-3/4”. However the Mauser can be fussy on bullet types as it has a reasonably long throat and it might be that the greater length of the 75-grainer offered a more stable shot start and rifling engagement length. But it has given me some ideas on using their 75-grain A-MAX as a hunting load, which can be loaded to a recommended COL of 2.390” and still magazine feed in the M 03, though it’s too long for the AR15 mag.

With 308 my favourite reload is the 168-grain A-MAX over 44-grains of Vit N 140, so to see what appears to be an identical recipe off-the-shelf is most pleasing. The A-MAX though on the surface a target bullet is also recommended for thin skinned game and I have shot a lot of deer with it with great success in my old Remington 700/Riflecraft LSR (Light Sporting Rifle).
The TAP loading shows a bullet weight of 167.55-grains and a charge of 44.3-grains of again what looks like H4895. The quoted speed is 2700 fps; typically from a 24” rifle this was nearer at an average of 2657 fps. Again the ES was low at 11 fps. Accuracy was the ½” I have come to expect from this bullet and the Icon did not disappoint. Recoil was acceptable and the COL was dead on 2.800”.

Overall I was impressed by the TAP FPD ammo, speeds were a bit down on the 223, but that was probably due to the shorter 18” barrel used. Of the two I would go for the 60-grain load for a straight-pull and would have liked to have tried the 75-grainer in a 1-9” twist rate too. However when you start going 75-grains + in this calibre you need to get your barrel length and rifling right!

The 308 was brilliant and if I shot that calibre anymore; I would not bother with the hassle of reloading and just get the 168-grain TAP for both deer and range work. What did also impress was the consistency of components and powder charges and the smoothness and reliability of the loading/ejection cycle in all guns used. Not cheap but high quality ammo and well worth a look if you want that bit extra performance.