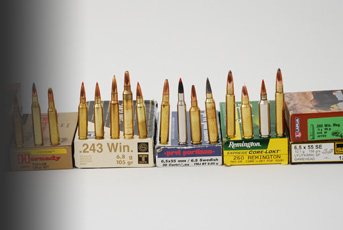 Last time I considered the diverse amount of calibres on offer to the UK hunter and looked at the smaller centrefire cartridges that could be used for small deer species and varmints. There’s a lot of good stuff out there but, if you want easy and over- the-counter solutions then two stand out; the 223 Remington (varmint & small deer) and 243 Winchester (everything). This month I’m looking at what I see as the general use, fullbore centrefires.
This massive group of cartridges means larger deer and game species – roe to red, African plain’s game, wild boar and mountain sheep/goats. This as we shall see is very much a split decision given where you hunt.

Calibre choice is all about species; in the UK you can do it all with 243 and or 308 Winchester. Of the two my choice would be the latter, as I do not really like 243. Don’t get me wrong it’s a good cartridge and one I would recommend to just about anyone; certainly for foxes and small/medium deer. But there’s better! The reason is barrel length, as it can be hard to make the large deer legal energy minimum of 1700 ft/lbs even with a 100-grain bullet. My 19” Steyr Scout just scraped in at 1750 ft/lbs using 100-grain Lapua Mega, but would not get near it with a 95-grain load. A 22” tube should be OK for all needs but if you opt for this calibre then stay away from anything less, if roe and above are your quarry.
Given many use lighter projectiles (75-85-grains) so they have one load for fox and deer you are getting into the area of potential meat damaging on body shots and a need to go for the more difficult head or neck for a more certain knock down. Plus the aforementioned energy issues; hence my preference for the bigger 308 as it is more than capable with the correct bullet choice for muntjac to red and most African plain’s game and boar. On average 150 and 168-grain bullets are running at 2800 fps/2300 ft/lbs and 2500 fps/2400 ft/lbs accordingly. I used a 308 for many years and have had good mid-range success out to 350/400 yards, though I would say this calibre can be a bit sharp in a light rifle! However it’s worth looking at variations of that theme too.

In terms of bore/bullet diameter/shape and ballistic coefficient (BC) there are some magic numbers; with 6.5mm (.264”) and 7mm (.284”) being some of the best out there. Two classic and more than capable examples are the 6.5x55mm Swedish and the 7x57mm Mauser. They’ve been around for about 100 years and are still going strong; which speaks volumes, of the two the Swede is by far the most popular in the UK. If these two have a downside then it’s their long cartridge overall length (COL) meaning a long action receiver. Plus, and like the 243, they do not do well with shorter barrels…
Necking down a 308 to 6mm produced the 243 so it was a logical step to take it further; the results the 260 Rem (6.5) and the 7mm-08 Rem. For me the 260 totally replaces the 243 and offers better performance for larger species too. With the 7mm offering perhaps an alternative ballistic solution to the .30” cal. Such is the appeal of the 6.5mm that there are two new rounds - Laupa’s 6.5x47mm and Hornady’s 6.5 Creedmoor. In truth all these generic 260s are similar, with price and availability being more important considerations…

Moving up to the long action options we have the classic 30-06 Springfield, which is a highly versatile round. Maybe a tad big for small/medium deer, it none the less works and will cover just about any species up to and including boar and plain’s game. With a generous bullet weight choice you can be pushing 130-grainers right up to the 220/250 heavyweights. Many hunters use this calibre for Africa with great success.
The 270 Win has now become a contentious subject. Popular some time ago for its power it has gained a reputation as a meat mangler and heavy kicker. Truth is it maybe a tad over the top but for larger animals and with the right bullet selection it’s still a viable choice. The 25-06 Rem is similar and in some ways a super 243 Win, capable of throwing bullets from around 60 - 120-grains, it’s powerful and flat-shooting and a good choice for longer range foxes in open/windy terrain. Likewise a good killer of all deer species.
In this class many would recommend 243 and 308 Winchester and be totally justified. I would opt for 260 Remington as my general use cartridge and 30-06 Springfield if I wanted a boar and Africa rifle. The 25-06 is also worth consideration for the one gun hunter as it will cover a broad range of species too.
While we are here let’s consider a few European options, with the caveat of ammunition availability in the UK being paramount. The old 8x57mm (8mm Mauser) was the standard German service cartridge and like the 30-06 has remained popular. This is another good choice for medium/large game and boar though it can be a bit lumpy in the shoulder. The 7x64mm is another performer; offering one of the magic numbers (7mm/.284) and the ability of medium/heavy bullets. Far too many to list, if you’re looking for something a bit different that works then check out the metrics.

Recent developments have been in the lesser magnums. In the past you had two main choices - 7mm Remington Magnum and 300 Win Mag, two highly capable, long range rounds that offer ample power and good ballistics. Of the two the 7mm is probably better for the UK, but both are over the top for more normal species and distances. The 300 makes an excellent choice for Africa and boar though.
Winchester started something with their WSM (Winchester Short Magnum) range in 270, 7mm and 300. Using the wide bodied 404 Jeffry case shortened and necked down they offered short action alternatives to the established 7mm and 300 magnums and the 270 Weatherby Mag. Power-wise they come close to the originals and in the case of the 270 and 300 ace the 270 Win and 30-06. Any would make a good choice for boar or Africa. Remington came back with their Short Action Ultra Magnum (SAUM), which is near identical.
Ruger offers the 300 and 338 RCMs (Ruger Compact Magnums) much on the same lines. As the owner of 270 and 300 WSM and 338 RCM rifles these short/wide cases do seem better behaved than their full length inspirations. However with so many new and similar choices; what the gun shop regularly stocks is paramount and an issue for overseas hunting! You might well get 243, 308 and 270 Win, 30-06, 7mm Rem Mag and 300 Win Mag even in a small, provisional foreign gun shop, but WSM, RCM and SAUM might be a different question.
These magnum-type calibres need to be considered carefully in relation to what you mainly hunt, as they are often far too much gun! Plus your licensing department might not consider them suitable, certainly on smaller species and areas of land.
If you’re aspirations are only muntjac, roe and perhaps the occasional fallow then 243/308 Win along with 260 or 7mm-08 Rem are excellent choices. However, if you like to go further afield and on bigger species then I’d say at the least get a 270 Win, 30-06 Springfield, or one of the magnums be it short or long action. But never forget; raw power is never the whole answer; the right bullet in the right place wins every time!
Next month the Ackley, big bores and beyond.