Reloading: An Even ‘Holier’ Consideration! 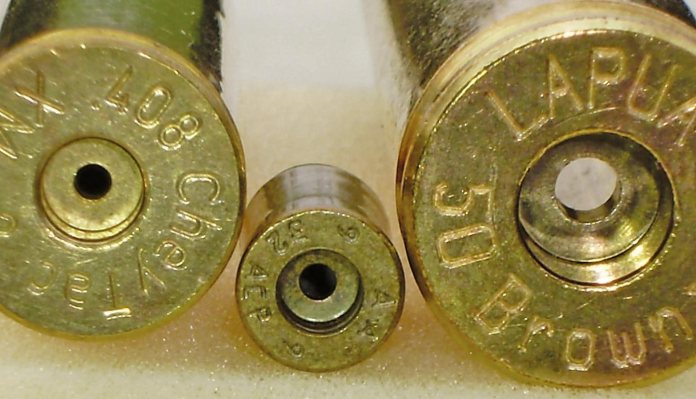 As a self-confessed ammo anorak, I spend time on the interweb searching for quality research papers on my pet subject. A multitude of productive sources include declassified documents from various elements of the U.S. Military, including the American Department of the Army for Research, Development and Acquisition Library in Washington. The later, more technical material from the U.S. Army Research Laboratory at Aberdeen Proving Ground (APG) in Maryland, as well as the Close Combat Armaments Center, Picatinny Arsenal, New Jersey.

Which leads me to the issue of terminology. I think G B Shaw got it right - (sic) “two nations divided by a common language”. For some years I’ve ignored papers that made reference to a spit-hole’, especially after a quick Google revealed some VERY strange images! Silly me. The U.S. Military, including John J Ritter of Aberdeen Proving Ground, uses the term to describe a cartridge flash hole. So here we are again, a year or so later and with more information on the topic of flash (spit) holes, thanks to John Ritter.

A flash hole allows the flame and pressure wave from the detonated primer to penetrate the propellant charge. The diameter needs to be small enough to stop the propellant charge from migrating into the primer cavity and large enough to prevent back pressure from rupturing the primer cup or blowing it to shreds. Standard SAAMI, CIP and case manufacturers data gives little clues as to the most desirable dimensions. Various web forums and sites refer to SAAMI dimensions but I’m not convinced, the nearest to a consensus indicating a range of .078” to .082”. Some unattributed drawings quote a nominal industry ‘standard’ diameter of .080” with a tolerance of +.004”, -.000”. There are also ‘Match’ cases, including Lapua PPC, BR, and 6.5x47 Lapua, which are produced with flash holes of .060” nominal diameter.

Additionally, some other European brass has flash hole diameters in the range of .063” to .067”. Oh yes, there’s also the unique (to UK S1 shooters) flash hole of the .50 BMG. My last resort was to collect and measure as many sample cases as possible. Indeed, my Lapua BMG brass measures .138” to.140”. If you’re buying uniforming tools it therefore makes sense to take some prior measurements!

Ritter’s work was in part provoked by an earlier Picatinny Arsenal study, “7.62-mm PRIMER/ PROPELLANT INTERFACE STUDY” by Mahmoud David Ahmad, into delayed ignition issues with M34 primers in pre-1993 Lake City Army Ammunition Plant (LCAAP) M80 ball ammo, the results of the work were illustrated by ignition and pressure timing curves and the issues traced in part to the primer sensitizing compound, tetracene, as well as to cartridge construction anomalies. Whilst these nominal hang-fire (0.3 to 0.4 millisecond) primer delays had been tolerable in gas-operated weapons, they had serious implications on the timing functions of the M134 electric minigun.

The work went on to compare performance with crimped and un-crimped rounds, variations in bullet seating depth and changes from the standard WC846 ball propellant. One of the notable conclusions was the intimate relationship between primer detonation effects and the propellant design – a proposed change to a flash suppressed version of the M80 propellant charge, WC846FS was the outcome. It had a faster burning rate, with similar density but the changed chemistry gave much more reliable primer/propellant ignition interaction. The pressure/time curves and spikes recorded between the new and old propellant designs were significantly different. It partly explains why ‘surplus’ canister WC846 is now readily available to the American handloader!

As a prelude to his new research, Ritter had also investigated primer timing and pressure issues in his previous work with #34 primers in 7.62 M80 ball:- “Spit-Hole Effects on the Ballistics of a 7.62-mm Cartridge”. Here he was using the WC846 based M80 cartridges as the default, with M80 ‘A’ variants using the WC846FS. This was his first published work with the use of a reduced flash hole diameter, down from .078” to .055”, equating to a 50% reduction in area. In the ‘primer-only’ evaluations he recorded a 20 fold increase in primer pocket pressure from the reduced flash hole and concluded that this was potentially disruptive.

When the experiment was repeated using fully assembled cartridges, the samples with the reduced flash hole produced a 350% increase in primer pocket pressure over those with the standard flash hole. In each test, the bullets in rounds employing the reduced flash hole diameter reached the engraving point faster than in the standard rounds, pointing to an accelerated deflagration profile. Since the ‘speed’ of the propellant was the same, it has to be concluded that the increased primer pressure spike achieve a faster breakdown of the ball powder retardants and initiated deflagration throughout the charge in a shorter time. Interestingly, whilst muzzle velocities were almost the same, the SD for the rounds with the reduced flash hole reduced by an amazing 30%. It seems that the Palma Match principle is a good one! Again, his tests revealed ignition inconsistencies with the ‘standard’ WC 846 propellant.

AN EVEN ‘HOLIER’ CONSIDERATION!

In this latest work, “Influence of Berdan and Boxer Primer Spit-Hole Diameter on 7.62-mm Cartridge Performance” he embraced the concept of Berdan flash holes. Here we have the combined performance of two of them to consider, from both a dynamic and dimensional point of view. He was again working with the 7.62mm M80 military cartridge. He used un-punched Lake City year 12 contract brass to simulate the Berdan effect, drilling two slightly offset holes, each of .055” diameter. The sum hole area being identical to that of a single ‘standard’ 7.62mm LC Boxer of .078” diameter – namely .0048 square inches. In a move not unlike my original experiments, he then produced a third batch with an oversize single flash hole of .110” diameter or .0095 square inches – approx twice the area of those in the other two batches.

The three test cartridge designs were all fitted with No. 34 Boxer primers (LCAAP NATO Spec #34) from the same production batch (LC- 08E720-252). Care was taken to ensure that none of the three anvil legs obscured the two ‘Berdan’ flash holes. Projectiles and propellant were from single batches and reflected the then service recipe which by now used WC846FS. The size of each batch was surprisingly small, just eight rounds. It is interesting to compare these results with those from his earlier work.

Here the variations in pressure and performance were marginal. However, Ritter did record that the slight difference noted showed that “the Berdan style spit-hole produces pressure sooner in the IB cycle, but that pressure has a lower pressurization rate (more gradual slope) and a lower peak pressure than the (standard) M80 (49.8 ksi versus 50.6 ksi). All of this translates into a slightly diminished muzzle velocity. If there is one area that the Berdan-style primer may outperform the standard M80, it is with its consistency. The standard deviation of both the muzzle velocity and peak pressure was lower in the Berdan. However, none of the configurations explored had particularly bad standard deviations.”

These experiments seem to illustrate that the ‘standard’ flash hole diameter is a safe, practical dimension, fit for purpose; and that progressive increases in the surface area have an increasingly deleterious effect on cartridge performance, whilst progressive reductions in surface area cause increased pressure and accelerated deflagration for a given type and size of charge. Although not a commercially viable proposition, the tests also hint that the ‘two hole’ Berdan principle can improve regularity and reduce performance SD. Of equal interest is the close relationship between these changes and the behaviours of particular propellants.