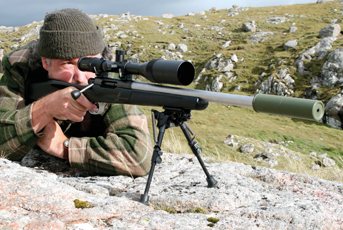 The .17 Rem is one of those calibres that sparks controversy into its use and potency, rather like the 220 Swift. I have now owned five differing .17 Rems and served my apprenticeship at the reloading table and in the field and I still really like it as a flat shooting and safe to use varmint cartridge.

Probably one of the first recognisable .17 calibre cartridges sprung to life just after the war in 1945 and was developed by the renowned wildcatter P.O.Ackley. He necked down some then abundant .30 carbine brass to .172” diameter (not .177 as with air rifles) to produce the .17 Ackley Pee Wee. Next was the Hornet case, an obvious choice and a really good close range foxer and later the .17 Bee. However, after Remington introduced the .222 Remington in 1950 there was a new era of exciting cartridge development. The best of these being the .17 Javelina which is a shortened .222 blown out to up capacity it gave 3700fps+ with 25-grain bullets.

Then came a myriad of new wildcats such as .17 Mach IV (221 Fireball case necked down) now called the .17 Fireball, .17-223 (.223 case) and the .17-222 Magnum. Others based on larger cases were tried such as the 22/250 but would prove to be too much over bore capacity. Remington surprised everyone by legitimising the wee seventeen by not domesticating the .17/223 cartridge as expected but by using the .223 case and pushing the shoulder back and therefore producing a longer neck. Chambered in their popular Model 700 bolt action rifle with a 24” barrel the 25-grain Power Lokt bullet surpassed the magical 4000 fps barrier and a new varmint cartridge had been born.

Bullet selection for the .17 has always been a bit frugal and even more so now due to Berger stopping production of its 15 to 18 and even 37-grain bullets, bummer, I loved those old 15 pills. However 20-25 grain weights are the standard factory offering and actually are best suited for the .17 Rem, giving best overall ballistics and down range performance.

That .172” bore is a tiny hole to burn powder down and so, as one can imagine, the peak pressure curve is reached quickly and can go over the top with only the slightest change in powder weight, COL or temperature change. When working up a load 0.25 grain increments are recommended and keep an eye on those primers for flattening - indicating pressure problems.

Part of the appeal of the .17 Rem is its velocity potential coupled with terminal performance. Pushing a bullet too fast can cause it to come apart due to the high rotational torque exerted on the jacket. I have shot several five-shoot groups that only had three holes on target!

Cleaning poses problems too, a good bore guide such as Sinclair or Hornady are essential to stop the rod bending and damaging the rifling. Good cleaning rods are needed too; I use Dewey or Pro Shot rods and brushes as well as Sinclair. Generally I use Butch`s Bore Shine but KG12 solvent is excellent and Pro Shot Copper solvent (to remove copper) works very well.

Twist rates from rifles tested can vary from 1 in 12 to 1 in 9”, stick to 1 in 9” so 30-grainers stabilise well. If I am shooting Magpies, Crows etc then a rapidly expanding 20 -25grain bullet is tops, both provide super fast velocities coupled to a very flat trajectory and sheer on target energy transfer. They are also very safe to shoot as they do not exit the carcass and ricochets are less likely, just right for around the farm!

First up are the Berger’s, now only three options. The 20-grain Varmint has a BC of 0.120 and is fine in a 1 in 12 twist barrel and has a flat base and small hollow point. The 25-grain Match Target and Match Varmint have the same weight but differing designs the Target has a smaller hollow point than the Varmint version, 30-grain Varmints are available with a BC of 0.178 but need at least a 1 in 9 twist barrel.

Just as a tease I remember those 15-grain Bergers exiting at hair raising velocities over 4300 fps that gives 616 ft/lbs energy at the muzzle. Nosler’s Varmageddon (great name) 20-grain and 20-grain Ply Tips are yet to reach here but I eagerly await them as I bet they shoot well if their Ballistic Tips are anything to go by.

nice to see Berger make those smaller weights again especially with the new .17 Hornet round being produced and a Sierra 20gr BlitzKing would be lovely too.

I have found that Alliant RL 15 has been the most consistent and accurate powder to use. I have experimented with H380, Varget and others and all work well, some burn cleaner some have better load densities but RL15 stands out as the best in my guns, yours may well be different. Now that some powders are becoming difficult to get I tried a few new ones into mix as well from a 24” barrel.

The V-MAX’s are my favourite; they shoot flat as hell, are accurate and humanely dispatch your quarry like nothing I have seen. I also use a short 18” barrel for the RPA switch barrel rifle as well as 24” and this is a fantastically accurate rifle that I use a lot and that short tube does not affect velocity as much as you may think. My load of 24.5 grains RL15 with those speedy V-MAX 20s still yields 3908 fps/680 ft/lbs and will group 0.45” or less at 100 yards consistently.

It’s annoying that the .17 cal range of bullets have become sparse, probably due to the more efficient .20 cals now available, we should be careful what we ask for! Some of the older Berger’s are still available from shops I have seen, so buy any you find, I have my secret stash!

But really the 20 grain Hornady V-MAX is best for the .17 Rem and would be my first choice! Probably a lead-free version like Hornady’s NTX might be in the mix, which would be interesting, as there are already .20 and .22” available. The newer .17 Fireball aka 17 Mach 4 and 17 Hornet get the limelight but a good .17 Rem is just that – good!

I always have space for at least one .17 Rem rifle because for sub 250 yard fox and varmint harvests I can think of no other faster, more effective and safe round to use.