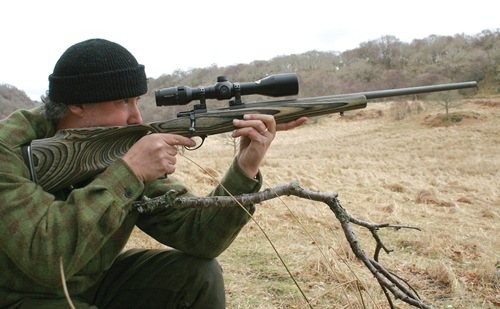 Most shooters recognise the .22 and 6mm PPC series of cartridges jointly developed by Dr Louis Palmisano and Ferris Pindell in 1974 as the two best out there. Their inception completely changed the way we thought about design/performance and put to rest the myth that bigger was better! These are short and extremely efficient achieving extreme accuracy and consistency for minimal input. Just because it was originally designed for Bench Rest does not mean it does not have a place in the fields of Britain as a superb pest/vermin cartridge!

The .17 PPC is just one incarnation of the PPC case the most popular being .22 and 6mm, although .20 is also good and the 6.5 version now modernised into the 6.5 Grendel is really turning heads too.

Being a .17 calibre (0.172”) you are looking at bullets ranging from 15 to 37-grains which practically speaking means velocities from 3600-4600 fps’ which is quite staggering! But there is no pain without gain, the differing weights will require specific rifling twists for optimum stability, also too much velocity just tears a bullet apart due to the incredible forces of rotational spin generated at these speeds. However this all spells trouble for vermin as the heavier the bullet weight the higher the ballistic coefficient increases and that means the better it slips through the variable air densities on its way to the game.

The Berger 37-grain VLD (Very Low Drag) bullet has a better BC (ballistic coefficient) of 0.343 than a 243, 75-grain V-MAX projectile. Equally the 30-grain Wood Chuck Den Gold boat tail offers a BC of 0.270 similar to a 60-grain V-MAX .224 bullet value. It also utilises a more regular 1 in 9 twist and therefore could be used for all the other available .17 calibre bullets and could be driven up to 4150 fps without any problems! The reason being the .17`s are lighter and can be driven faster but have a better BC due to their long/slim shape, which pays off dividends down range.

The 37-grain Berger is seriously specialised and requires a super fast 1 in 6 twist barrel to stabilise it correctly and can only be pushed at a maximum of 3600 fps before it comes apart. However, I have a Pac Nor barrel for my RPA just coming to fruition as this is written but my initial attention is toward the lighter weights. Berger have now discontinued the 37-grain VLD, rotters!

The PPC case head is an awkward size at 0.445” so the bolt head might require some small modifications to function properly. So speak to your gunsmith about suitable donor actions before going ahead. My rifle is a Venom Arms custom I have been running for more than 14 years now, and the barrel still has life in it! Essentially this is a Wildcat cartridge and not commercially available so a degree of case preparation is necessary. Well; quite a lot really but you have come to expect that of me now.

Always be sure to use sufficient lube to stop cases sticking in your precious dies. Imperial sizing wax is great although Royal Case and Die Lube is equally good!

Because the brass will thicken as the neck is reduced you will need to neck turn to achieve the correct clearance with that of your rifles chamber. I specified a reamer to cut a 0.197” neck and so a loaded round would have to have a neck diameter of 0.195” to give the necessary 0.002” clearance for precise bullet release. K&M neck turners give a uniform neck diameter and then all that is then needed is to fire-form the brass and the characteristic PPC case is formed.

The .17 PPC case being small and squat actually likes the medium powder burn rates which include Reloder 15, Varget,Benchmark and Vit N135. I like small fast bullets especially for crow or rabbit sized vermin and so the obvious starting load used Hornady’s 20-grain V-MAX bullets, which are dependable performers in down range frangibility and inherent accuracy.

I now use Reloder 15 powder with a top load of 25-grains pushing the 20 V-MAX at 4627 fps. At these velocities the primer pockets can expand and .17`s are notoriously pressure sensitive so increase the charge in 0.25-grains increments only! Ok at these speeds barrel life is a concern, but performance-wise that’s 400fps faster than a .17 Remington!

The 20-grain Bergers also performed similarly to the V-MAX although I could up the charge to 25.5- grains of Reloder 15 to achieve 4688 fps before any pressure signs. The 25-grain Hornady’s or Bergers again with Reloader 15 and a charge of 26 grains achieved 4307 fps whilst 27-grains of Varget produced 4344 fps. Both are hollow points although in test I have found the Bergers more accurate and consistent.

Where the .17 PPC really shines is with heavier 30-grain projectiles. However there are few choices outside the world of specialist bullet makers. The Berger is the obvious choice, its flat base hollow point design works well, although I have had problems with some of them not expanding readily.

With 24.5 grains of Hodgdon Benchmark powder a velocity of 3963 fps makes it very useful as a fox load and another 0.5-grain pushes it over the 4000 fps barrier at 4089 fps. But I like to push the envelope and I have been using some specialist 30-grainers from Wood Chuck Den Gold. The difference between these and the Bergers is the Gold’s have a very high BC of 0.270 due to their thin and boat tailed design. This makes them very wind slippery with less drift at longer ranges, plus retains more velocity too. Which is just perfect for a long range performer like the .17 PPC.

As an all-round practical vermin tool it is hard to beat the 20-grain V-Max, when launched at 4627 fps drop is minimal:

Switch to the heavier but more ballistically efficient 30-grain Gold bullet and whilst the velocity is down by 600 fps you have an almost identical trajectory path but still retaining more energy down range. At 200 yards it has 695 ft/lbs when compared to the 462 ft/lbs of the faster/lighter 20 V-MAX.

This is not the whole story as accuracy will be the determining factor in bullet choice and with velocities this high rifling wear around the chambers throat will be accelerated. Fouling too can become a problem if you have cheap barrel or shoot large numbers at a time! But I use the 17 PPC as a one shot ultra long range crow or fox gun were I might only get one shot any way and its lightning speed and fast trajectory is just what you need.

Obviously the .17 PPC is not for everyone as there is a lot of case manipulation prior to any shooting. But when you have been in this game as long as I have the challenge and expectation outweighs any tedious chores from case forming. In truth it’s a superbly consistent and intrinsically accurate calibre from the off primarily due to its bench rest lineage.

Some cartridges are just like that, and the .17PPC achieves accurate and guaranteed humane one shot kills and at some astonishing ranges too! Just because it’s a small bullet do not dismiss it as inadequate that would be fool hardy. Let the rifle and the raw ballistics be the proof of the pudding not second hand tales from people who have never shot a .17!