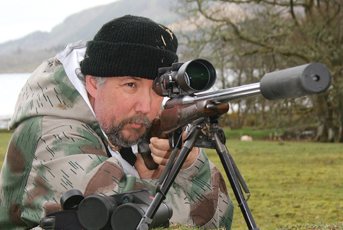 Let’s be honest there’s no need for a new wildcat, many of the cartridges available today more than adequately fill most shooting needs but then without invention there`s nothing new. Me, I just like messing around and wasting my money on ruining brass and sending copper down range at silly velocities. I like to try and get as much efficiency as possible so I use Quickload and QuickDesign ballistic programs to design a new wildcat but nearly all come from reforming or modifying an existing case.

IN YOUR BOLT FACE

I wanted a .308 bolt face so I could use a standard bolt head in my RPA Quadlite test rig but I wanted as fat and short a case to give me that short powder column yet still allow good capacity. I looked at the WSSM, 45 Blaser and several old English designs such as the .425 Rigby but settled on the .458 SOCOM. This was originally designed to shoot a heavy 350-grain payload from a M16 / M4 upper conversion at 1800 fps.

I tend to use an RPA Quadlite action set up for a switch barrel operation with numerous different sized recoil lugs to adjust headspace and the ability to switch between calibres in a trice. In this way it only costs the price of a new barrel and work, not a complete rifle. The barrel was a Walther stainless steel profiled to heavy varmint and fluted to reduce weight. Rifling was 1 in 10 twist to stabilise a range of bullets and the overall barrel length was a long 28” finished with a 5/8 x 18 muzzle thread.

I fitted a McMillan A5 stock for initial testing as it gave a good solid stable test bed, but I also fitted a McMillan Sako Varmint profile finished off in a burr walnut finish applied by the good old boys at Hydrographics. I fitted my Swarovski 6-24x50 TDS target scope as it suits the dual role of deer and varmint well in Leupold Q/D rings.

Necking a .458” down to .308 can get a bit tricky and needs numerous individual reductions in order to stop the cases collapsing or pushing a shoulder back. You can have a custom set of dies made with replacement neck bushes but I sourced a set of CH4D large bushing neck sizer dies from Norman Clark Gunsmiths which allowed be too slowly reduce the neck down in 10 thou increments (and some 5 thou) until I had the desired .308 neck. It took 19 individual neck bushes, Imperial Sizing Wax and 2 1⁄2 hours for 10 cases!

Final bush size was 0.340” but as you can imagine all that brass bending had made the necks thicker, in fact inside neck diameter (I/D) was 0.306 so 34 thou of neck thickness which means 17 thou a side, so I needed to remove 5 thou a side with the Sinclair neck trimmer to allow proper neck tension and good fit into the 0.339 thou neck on the chamber reamer.

It’s a slow but satisfying process done by hand although you can use a slow drill to speed it up if you want. You need to cut well into the neck with 40° cutter to avoid the dreaded doughnut of brass forming inside. Next trim the cases to length, 1.60” and de-burr inside and out and just for good measure deburr the primer hole and recut the primer pocket for exact fitment; why spoil the ship for a half penny of tar?

Because the CH4D dies are a universal fit the necks can become a little wonky but do not despair as fire forming will magically smooth any wrinkles out. I used a load of 42 grains Vit N135 with a Speer 125 grain TNT bullet seated into the rifling, running at 2781 fps. OK it’s a right fiddle and pain but when you see that stubby little round loaded up with a 125 gain Ballistic Tip it makes it all worthwhile!

I was hoping with a cartridge that was no bigger than a .308 Winchester in length but produce nearly .30-06 ballistics with a powder charge the same as a .308. I was counting on that short, dumpy profile to hold 56-grains of powder.

A 125-grain Nosler at 3156 fps with only 44-grains of Vit N133 and Federal Match Primer is none too shabby with 46-grains absolute max giving 3244 fps. At 100 yards three shots consistently made 0.35” from that long Walther barrel so really I could stop there… but I didn’t!

A Sabre Cut custom sabot bullet weighing 48-grains can be pushed to 4457 fps with a payload of 50-grains of Alliant Reloader RL7 powder, accuracy was dodgy at 1.5”; work in progress!

Ballistics, paper targets and computer generated trajectories are all well and good but it’s in the field where performance is really measured. As luck would have it the 300 Broadsword`s completion coincided with that of the roe buck season; perfect, so a foray into the Gloucester country side with Steve Bowers to christen the beast was in order.

A slow deliberate stalk revealing mainly does and the odd spooked yearling finally concluded at last knockings with a magnificent buck fraying and patrolling his territory. Suffice to say after a wait and safe shot the RPA trigger broke as the buck emerged over the ploughed field at 110 yards and he dropped instantly. It was a cracking medal head and a great first shot with the Broadsword!

Crows in Scotland with the super fast 110-Grain V-MAX load bucks the wind well and delivers a hard punch at long range when you need it. It`s also a great fox load as was the reduced, subsonic 90-grain XTP at close range.

Hands up, it’s a lot of work but it’s a very efficient case design and accuracy was really good to say the least. True a wildcat based on the 300 WSSM case called the 300 TK is easier to form but does not have the convenience of a 308 bolt face for easy and cheap rifle conversions.

The 300 Broadsword is so named because of my interest (obsession) with the Where Eagles Dare film. The round is very consistent with almost any load combination which is pleasing but as always it`s an exercise of ‘what if’ which keeps me messing with calibres and ballistics although it can get expensive!