Wildcatting: Still Got It 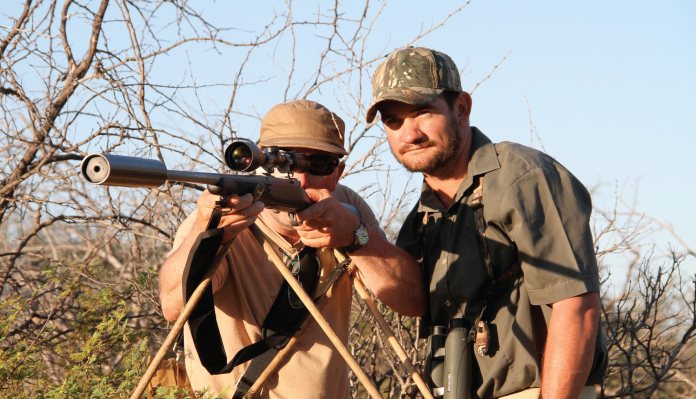 Hands up, I admit it; I have never really had any affection for the 300 Win Mag. I always thought of it as a bit of over kill and I preferred something more classic like the 300 H &H or 308 Norma Magnum. Shame on me, having shot a Blaser R93 in the Czech Republic on Mouflon and Boar and now in Namibia with a Ruger Hawkeye, both in this old veteran calibre I have to admit it’s a cracking cartridge!

It’s no spring chicken though, designed in 1963 by Winchester to fill a void where hunters wanted a powerful .30 cal rifle but in a medium weight rifle. It soon became probably the most popular magnum cartridge ever developed and proved itself not only on the game fields but also as a supreme long range cartridge too.

The base is a redesigned .338 Win Magnum case that has the traditional belted head design for head spacing. The case neck is reduced to .30 cal and the shoulder moved forward by 0.156 thou whilst lengthening the case by 0.120 thou.

You therefore had a case that would give an increase of 300 fps velocity over the .30-06 Springfield thus giving nearly 30% energy retention down range where it counts. Owners of 30-06 rifles after a few bolt face changes could rebarrel to the new Magnum because the big 30 had one more surprise and probably the reason for its success. That was its overall length of 3.34” could easily cycle through a standard 30-06 length action size and no need for a magnum action.

The only real criticism and one I was not keen on was the short case neck. At only 0.264” long i.e. below one .30 cal calibre length people surmised how could it possibly support those heavier/longer .30 cal bullets. Well it does and very well too!

Being a 30 cal you also have a superb choice of bullet types, styles and weights to choose from further giving the 300 Win Mag greater versatility. One further important factor is that the big 30 cal has universal appeal and thus factory ammunition is stocked in most gunshops around the world. Therefore if you are a frequent hunter who travels then if your ammo is lost in transit a replacement load can be sourced quite easily.

This is where I have been acquainted with the 300 Win Mag, abroad and it makes perfect sense, as rifles and ammo are readily available and its power and accuracy is capable of taking even the biggest plains game like Eland.

Typical powder choice would be broad due to the weight range of the bullets. RL 15 to RL 25 are good as are Hodgdon H4350, H4831 or H1000. IMR too has something to offer - IMR 4350 and IMR 4831 always achieve good velocities and consistent accuracy in the test rifles. To achieve the Winchesters performance a minimum of 24” barrel is advisable or longer for long range rifles. It allows the payload of slower burning powder to achieve sufficient back pressure to launch those big 30 cal bullets down range.

Typically a 1 in 10 twist barrel is utilised as the 300 performs best with bullet weight of 165-200 grains weight and this twist rate is fine for stability and reasonable pressure. Performance-wise the 300 Win Mag sits between the 30-06 round and the 300 Weatherby Magnum but the Winchester can cycle through a standard action.
With more modern day powders the 300 Win Mag can near as damn perform as a Weatherby would. One fact is that as the bullet weights goes up the seating depth or bullet protrusion into the case increases. This means less powder or compressed loads unless the throat is lengthened by a custom reamer. In practice and on the range it actually makes little difference in performance as the 300 still shines.

Due to the case being a belted design the headspace is taken off this belt and thus careful resizing if you reload is necessary. I.e. make sure the shoulder is not pushed back too far in full length sizing dies otherwise the case can move forward under the firing pressure and the case can stretch in front of the belt and eventually cause incipient head separation.

165-grain bullets can be pushed to 3200 fps and are a good middle ground for those wanting a flat shooting yet hard hitting projectile. Here I like 165-grain Sierra Game Kings with a payload of 72.25- grains of Alliant RL 17 achieving 3211 fps/3779 ft/ lbs, but the real winner is with the 180-grain projectile. Typically with 180s 3000 fps is easily achieved although 3100 fps is better. 76.0-grains of Alliant RL22 is a good load and achieves just over 3000 fps whilst that top velocity can be had with careful loading of Hodgdon Hybrid 100V powder to 70-grains for 3089 fps. I use a lighter load sometimes now of 75-grains of Alliant RL 22 for 2873 fps/3300 ft/lbs and with Sierra’s 180-grain Game King I get 3-shots in one big hole from the thirty year old Sako Finnbear rifle.

For those you need something heavier or want to launch some with a higher ballistic coefficient (BC) for long range work then 190 - 230-grain bullets are the way to go. The 200-grain Swift A-Frame is tough and good for heavier game and can be shot at 2811 fps with a load of 72.25-grains of Hodgdon H 4831.

At home I use the lighter 180-grainers with Sierra Gamekings reload as above, rather like a top end 30-06 but very accurate, the other a screamer at 3118 fps/3886 ft/lbs and MOA accuracy with 70- grains of Hybrid 100V powder. Also factory loads proved accurate at 1 - 1.25” at 100 yards with either Remington 150-grain Core Lokt or Federal 165-grain Partitions and Norma 180-grain Swift A-Frames, so good back up loads.

On Wild Boar and Mouflon I used RWS factory 180-grain loads which provided deep penetrating but with good expansion to release that huge kinetic energy within the beast for a quick kill. Similarly in Namibia I borrowed a Ruger Hawkeye Stainless steel synthetic which shot Barnes VOR-TX 180-grain Tipped TSX bullets loaded at 2960 fps, these proved phenomenally accurate with less than one inch groups at 100 yards.

The reason for these Barnes bullets is deep penetration and on Eland, Kudu and Zebra they are a god send. Check out those recovered bullets that travelled the entire length of a Kudu from neck to hindquarters!

Despite my reservations in the past I have to say if you travel regularly abroad or have long range stags to shoot here in Britain then the 300 Win Mag is a highly efficient, intrinsically accurate and widely available cartridge. It has more than enough bullet choice and a good array of factory ammunition to boot and most manufacturers offer their rifles in the big 300 so you have a massive choice of both hardware and ammo to suit just about any need!