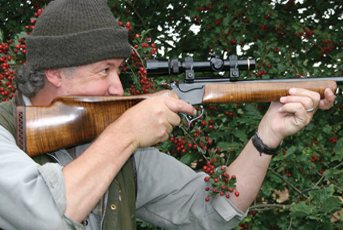 I like the quirky calibres; the odd cartridges that seem to have lost favour and the ones that are really good but seem to never see the like of day any more. I have been using a T/C Contender carbine with a few odd calibres recently and have been amazed at one that on the face of it is a relic from the past and you would think would have no use today. The .35 Remington ‘old stumpy’ is one such. Designed over a hundred years ago in 1906 Remington Arms Company developed a series of rimless rounds primarily for use in their

Model 8 semi automatic rifle. These included the .25, .30, .32 and .35”versions which were meant to rival Winchester’s range of similar rimmed cartridges in their lever action Model 94 rifle.

The .35 Remington really is a woods rifle suited best to carbine-length guns to shoot a 0.358” diameter bullet for deer and black bear as it has good accuracy with mild recoil for its size yet develops good energy figures. That`s fine for America so how can a 100-year old cartridge fit into today`s deer stalking scene? Well in all truth it`s pretty darn good!

Cartridge overall length (COL) is 1.920” with a trim length of 1.910” and has a shoulder angle of 25° but this shoulder is very shallow and so correct headspace when resizing cases for reloading. It also operates at a low overall chamber pressure of 35000-39000 psi rather than the usual 50000 psi of say a standard .308 round. Case capacity is 50.7-grains of water with the Remington brass I used. As you can see this is not a high velocity round, more a stout short range performer. However, it’s capable of delivering a heavy bullet with good sectional density for good penetration yet solid knock down power with minimal meat damage.

The bullet diameter 0.358” is common to rifles chambered in the .35 calibre. However, the .35 Rem can also shoot smaller and lighter 0.357” pistol bullets, which compromises its initial premise of using heavy pills although its good fun.

The smallest bullet I used was a 150-grains bullet used in the factory Remington loads, although 180 and 250-grains are more common. I did try some pistol bullets from Nosler just to see. The Contender carbine has a 23 inch barrel and I managed to source some factory ammo from Norman Clarks - what doesn`t he have stashed away! - and of course a lot of reloading.

When reloading there are several important steps you need to pay special attention to. Firstly because the shoulder is so shallow it is easy to push it back too far when re-sizing so causing headspace issues. What happens is the case is slack in the chamber and when the hammer hits the firing pin it moves the whole cartridge forward a fraction and thus loses energy and you get a light strike. I had this a lot even on the factory loads! You do not want that if a bear is coming for you! The answer is to neck size the brass only after the initial firing and no not touch the shoulder or as I did neck up the case to 0.375” with an expander mandrel and then re-size using the full length resizing die back down to .358 calibre but leave a small 0.375” shoulder for the case the headspace off and thus have a tight fit. Bit of a fiddle but it works and makes it safe and reliable. (See table overleaf)

Remington’s 150-grain Core-Lokt pointed soft point load, the lightest tested and this gave an average of 2216 fps/1636 ft/lbs energy. That last figure is not deer legal in England (1700 ft/lbs)

The Remington 200-grain Core-Lokt soft point was next up and gave a very healthy 2118 fps/1993 ft/lbs energy so great for deer in England but this time not legal in Scotland due to the slow velocity below the 2450 fps limit!

Federal 200-grain loads, one an old batch and the other a newer lot number. Both were soft pointed bullets but the old ammunition yielded 2075 fps/1913 ft/lbs whilst the newer lot gave an impressive 2211 fps/2172 ft/lbs and printed 1.25”.

The 180-grain is a better bullet and I chose Hornady’s Interlock with flat base and pointed bullet tip. Here a load of 35-grains of Hodgdon Benchmark gave a healthy 2114 fps/1787 ft/lbs with some good sub inch groups at 100 yards. It maxed out at 36-grains for 2132 fps/1818 ft/lbs again a solid, hard- hitting close range deer load.

Same bullet but different powder with 40-grains of Hodgdon Varget to bulk out the case capacity giving 2143 fps/1836 ft/lbs, a nice load for deer and good accuracy too. Although a little slow burning powder as pressures were low but case capacity near full.

Most accurate load went to the 225-grain Sierra Spitzer. Three of those big heavy dustbins went into 0.75” at 100 yards powered by 32-grains of Reloader RL10X at 2135 fps/2277 ft/lbs. Reloder RL 10X is a much better powder for the .35 Rem it is fast burning and gives maximum velocity for less weight. The heaviest bullet was the Speer 250-grain, which really is too much for the sedate .35 Remington but it still managed 2081 fps/2403 ft/lbs energy!

Ironically although designed for big American Whitetail deer and Black Bear the .35 Remigton was great for close range stalking Roe or Muntjac where a slow heavy bullet develops a high kinetic shock without a fast expanding energy release and spoilt venison.

On the Roe the 180-grain Interlock or Sierra soft point put a large calibre hole right through and on gralloching there was no unnecessary bruising to the meat. As the Yanks say “you can eat right up to the hole” not quite Delia!

Unusual in the normal sense the .35 Remington may not be your main rifle for stalking but a century old round can still cut the mustard today and actually does a really good job if you are willing to experiment a little and put the time into reloading specific loads.