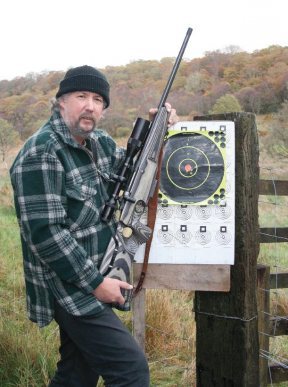 The Swedes have always known the benefits of this best of metric calibres, the 6.5mm or 0.260”, just look at the old 6.5x55mm Swedish, which is still going strong today and is the entry-level calibre for moose. These bullets possess both high ballistic coefficients (BC) and a good range of weights. This makes for a super efficient deep penetrating projectile that can be depended on to hit the target at close to long range as well as retain sufficient energy for a humane shot.

New 6.5mm cartridges were slow to be accepted and some just bombed like the 6.5 Rem Mag, .264 Win Mag but there certainly has been a resurgence of late. The older 260 Rem has been with us forever it seems and Hornady’s 6.5 Creedmoor has proved its worth but for me one of the best is the 6.5x47 Lapua designed by the Finnish case and cartridge manufacturer Lapua and has followed a trend for smaller efficient case design, primarily for long range target shooters but also benefitting us hunters.

It has been universally accepted amongst the bench rest and FT shooters but very few rifle manufacturers chamber their wares for this calibre which is bizarre as it’s a superb all-rounder.

Another superb efficient mid-sized cartridge to eke every last drop of velocity and down range performance you can from the ballistically excellent 6.5mm bullets. The case conforms to the small is beautiful philosophy and is designed to fit into a short action yet still hold a 48.5-grains of water capacity. Think of it as a short .260 Rem, the case is 1.850”with a cartridge overall length (COL) of 2.795 and a trim length of 1.840”. Couple to this the use, unsurprisingly, of the superb Lapua brass and you have something ideally suited for handloaders!

The case also has a small rifle primer and primer flash hole for consistent ignition and a strong head (rear) section that allows internal pressure loads up to 63000 psi; not bad!

Like the PPC and BR cartridges the Lapua is a very easy calibre to load for and it seems near impossible to produce an inaccurate round. Some cases are like that and the 6.5x47L can handle powders running from fast to slow dependent on bullet weights. Usually projectiles from 100 -140 grains are shot with the 120-130gr bullets performing best.

Powders such as Vit N133, Vit N 140, RL15 or RL17 all being good performers enabling bullets of 120 grains to achieve 2900 fps, 130-grainers to speed along at 2800 fps and 140 grain bullets at 2650 fps. These velocities coupled to bullets with high ballistic coefficients (BSs) in the 0.5 to 0.6 G1 values means great accuracy and performance be it punching paper or shooting live quarry! Barrel twist rates are recommended at 1 in 8” which will enable you to shoot all the bullets the 6.5 is capable of up to 140-grain weight.

Reload equipment is also well catered for with the fast acceptance of this little gem. I use Redding Type S Match Die set to reload the 6.5x47L; I used a full length version with replaceable neck bushing. In that way you can match the neck diameter and alter neck tension on the bullet with differing replacement bushings. I used the 0.288” bush for my Lynx 94 straight pull rifle and it is important to choose the full length die not the neck only version as primary extraction can be tough on some straight pulls so this full length die negates any problems. The other die is the Micro-meter topped seating die to give excellent precision in seating your different bullets to altering depths so you can record the dial indicated and then return to that figure when using a different load.

I have tried factory ammo which is very good but reloads are the way to go to match the individual chamber and throating dimensions of your rifle as most are custom items anyway. But out of interest from the Lynx 94 factory Scenar Match bullets with the 108-grainer’s travel at 2841 fps/1936 ft/lbs whilst the 123-grain versions hits 2711 fps/2008 ft/lbs. Interestingly these were in cold Scotland as in Surrey in 30° heat the figures were 2888 fps for the 108-grain bullets and 2783 fps for 123-grainers.

I ran the data through Quickload and QuickTarget Ballistics program to get an accurate trajectory drop and windage compensation which proves excellent for long range Varminting on Scottish bunnies amongst the dunes with 123-gr ain Lapua Scenars. Switch to Nosler 120-grain Ballistic Tips travelling at 2789 fps, not max load but their performance on several roe deer satisfied me of their performance and they were super accurate.

I thought I would sort out a comparison between the 6.5x47L and the bigger more popular deer cartridges such as .308 Win and .30-06 Springfield to see advantages and disadvantages.

This is where the bigger .30 cals has an advantage but long range shooters love the 6.5x47L because the trajectory is better than the .30 cals and energy does not matter and with less powder, recoil etc you have a better chance of hitting the target

The 6.5mm calibre is now getting the attention it has deserved for all these years from new shooters, while oldies will be shouting we already had the 6.5x55mm! Yes I would agree as the old Swede has stayed the course and like the 30-06 Springfield is still popular; both calibres being over 100-years in military and sporting service. But this new breed of 6.5mm are proving the joys of a smaller pay load, high BC bullets and efficient case design that really works. The 6.5 Creedmoor, .260 Rem, .260 Rem AK are very good too but to me that Lapua 6.5mm is just about perfect for applications here in Britain.