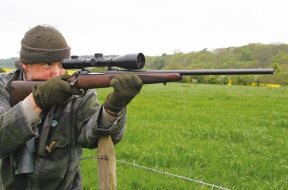 There is not one perfect cartridge, some come very close dependent on your requirements, range and species of deer stalked but the problem becomes even worse if you intent using your deer rifle also for foxes. Yet the one calibre/cartridge for deer stalking that is flat shooting enough to minimise trajectory errors, mild recoiling to allow you to spot your shot and accurate enough to gain precise shot placement would be nice.

I like short action calibres such as the .308, .260 and 6.5x47 Lapua which are flexible to reload for and offer bullet weights to please both a fox or deer shooter. However sometimes the ‘perfect’ cartridge has been standing there looking us all in the face for years and in the case of the 6.5x55mm Swedish Mauser, since 1894!

There is something about the 6.5mm or 0.264” calibre that lends itself towards all the criteria above. Ballistically the bullet weights coupled to their length lend themselves to very good ballistic coefficients (BC) making the 6.5 Swede a good efficient all-rounder!

Origins started with the need for a military round, which is so often the case. With both the Swedish and Norwegian armies using it in the 1890’s it could quite easily have been called the Norwegian Mauser - if it was not for the good quality Swedish Mauser rifles it was chambered in. The first military loading was for a 156-grain bullet but for sporting purposes here in Britain the 6.5 x55 can handle bullet weights from 85 up to 160-grains comfortably, giving you a good degree of choice and styles of bullet types for what every game you choose to hunt. The case is 55 mm long with an elegant tapered body that holds approximately 50-grains of H4350 powder with a 100-grain bullet on top. The rifling twist rate to stabilise the long 6.5mm projectile is usually 1 in 7.5 to 1 in 8.5” which is fast but necessary to achieve best accuracy from the heavier weights.

There is no shortage of 6.5mm bullets, capable of vermin, fox, deer and even moose! But matching the perfect projectile to your intended quarry game requires a little thought and deliberation. Starting from the lightest and working your way up, bullet construction is far more important than sheer velocity. It doesn’t matter if it shoots laser-flat and quick, it’s really all about what it does when it gets there. Get this wrong for the species you are after and you are in trouble!

If you are going to use the 6.5x55 for foxes then a light weight more frangible bullet is preferable over a more predictably expanding one designed for deer. Anything that decreases risks of ricochets and maximises internal kinetic energy transfer is preferable in theses instances. Factory ammunition is available from most manufacturers, but more choice of differing bullet weights is achieved with reloading. Suitable powders are medium burning rates such as Varget, H100V, H4350, H4895, RL15, RL19, Vit N140 or Vit N150, to name but a few.

The Sierra 85-grain Hollow point is a varminter designed to expand rapidly and shoot fast and is absolutely devastating as a longer range fox load as is the Hornady 95 grain V-MAX, which can be pushed to 3044 fps/1955ft/lbs energy. It is however highly frangible and although you could use it on deer the resulting meat damage would be undesirable. Still, zeroed at 100 yards that 95 V-MAX has dropped -2.6” at 200 and -10.5” at 300 yards with a wind drift at 10 mph from a 3 o’clock position of 3.4” at 200 yards, so very capable in the right hands.

Bullets around the 100-grain mark are more inclined for deer work although some of the hollow point designs are still great long range fox use. The Hornady 100-grain soft point produced an average velocity of 3004 fps/2004 ft/lbs with a load of 41-grains of Vit N140 powder and Federal match primer. It also exhibited good controlled expansion and would make a good flat shooting deer round. Stepping up the weight to 120-grains the Nosler Ballistic Tip is a very aerodynamic performer with velocities of over 2900 fps from the Sako 85 rifle although some stalkers find the initial rapid expansion of these bullets too great with resulting meat damage. The choice is yours, personally if a deer bullet proves too frangible but is accurate in my rifle I will reduce the velocity whilst still staying legal until a point where accuracy and acceptable carcass damage is achieved. This is not a problem with neck shots.

The Speer 120-grain Spitzer soft point in this weight shoots as fast and is a more controlled expanding bullet, so if accurate would be my choice. The 129-grain weight is a little quirky but Hornady offer their good SST to suit. Loaded with 44-grains of Alliant RL17 powder I achieved a velocity of 2740 fps/2151ft/lbs energy. This is a great all-round deer bullet that has a high BC, polymer tip and good internal construction with the Interlock gripping lead core to copper jacket. It expands faster than a conventional Interlock but less than other polymer tip designs I tested.

The best all-round bullet for deer would be in the 140-grain range. The Hornady SST or Sierra Game King’s are proven performers and both can be pushed to 2782 and 2723 fps respectively with a stiff load of 45.5-grains of Alliant RL19 powder. This generates 2407 and 2306 ft/lbs energy respectively. Their good penetration and controlled expansion on makes them good choices for the larger deer species. Again Speer makes a soft point 140, whilst Barnes has an X bullet flat base design or a 130 grain Triple Shock for maximum weight retention at terminal velocities. Either way a 140-grain 6.5mm Game King travelling at 2723 fps when zeroed at 100 yards will drop -3.4” at 200 and -13.1” at 300 with a wind drift of 2.8” (10 mph at 3 o’clock) at 200 yards.

Getting heavier and the 160-grain Hornady stands out as a capable bullet but its round nose design and large sectional density lends itself to greater penetration on deer than say a Ballistic Tip, and you have to wonder whether that is actually what you want. Great on a Moose but less effective on a smaller species. A load of 41-grains of Alliant RL 19 produced 2267 fps/1826 ft/ lbs energy which although quite accurate in the test gun would preclude it from use in Scotland due to the minimum velocity limit of 2450 fps for bullets for larger deer species.

I have shot the 6.5x55mm in short and long barrelled sporting and military rifles now and I really like it. There is just something that just works with this 6.5. It certainly is easy to load for and has that intrinsic accuracy you cannot quite put your figure on and doesn’t kick much and has a wide range of both factory and reloads to choose from. Damned if I know why I don`t own one?

It`s one of those cartridges that new generations of shooters rediscover and makes you wonder why we mess around with wildcat`s and new cartridge designs when this old statesman does it all, and rather well I think. Mind you what about an Ackley Improved AK version; oh god here I go again…