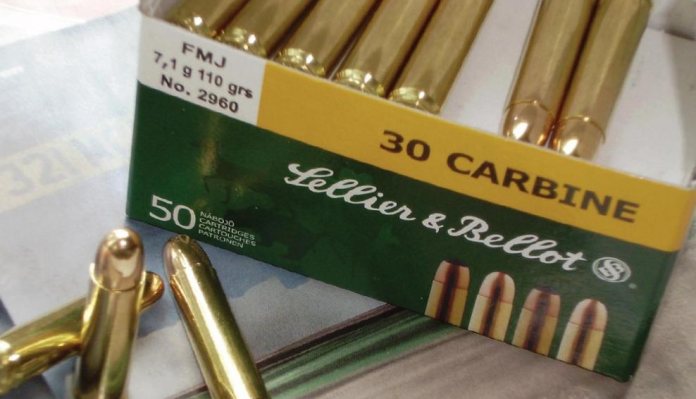 Lots of clunky little military carbines are chambered for it. I briefly owned a Ruger Blackhawk that made lots of noise with it. Masses of people reload and shoot it in ‘classic’ events outside the UK. Some even struggle to kill small/medium game and pests with it. It pre-dates the true ‘lightweight’ automatic military cartridge by more than a couple of decades – and leaves me thoroughly underwhelmed. It can only be the .30 US Carbine cartridge!

The cartridge and companion ‘light rifle’ were developed in the years immediately prior to WWII to improve upon the firepower, range and accuracy of the .45 ACP pistol carried by many US military personnel. A US Ordnance Department missive suggested that a .30 cal cartridge design would be most desirable, with a limiting parameter for both the cartridge and the ‘light rifle’ being a min calibre of .270 and a max weight of 5 lbs. Winchester undertook the early development work and, despite having both 7mm and .270 pills in their inventory, they took the .30 cal suggestion literally. Shaving the rim off their venerable, and largely unsuccessful .32 Winchester Self-Loading case gave them a starting point. The result was a small rifle primed, tapered, rimless case holding a .308”, 110gn RN-FMJ pill to be known as the .30 SL (Self Loading) cartridge. Over time the cartridge family evolved to include tracer, incendiary tracer, explosive tip, blank and a host of training variants.

A number of new rifle designs from various makers were submitted for evaluation and promptly rejected by the Army. Distracted by other projects, Winchester came late to the party with a cobbled together semi-automatic ‘kitzer’ based upon bits of other rifles from their inventory. It was the basis of the US M1 Carbine, weighing in at under 5 lbs with a 1 in 16 twist and 18” barrel. Development of the prototype for mass production and improved performance saw the weight increase to 5.2 lbs. In the 18” carbine barrel of their light rifle the cartridge delivered just under 2000 fps and a little over 950 ft/lbs energy. The Army requirement was an effective range of at least 300 yards with no more than an 18” peak trajectory on a 300 yd zero. It just about met the spec! Reports of its modest stopping power became too numerous to record; a frozen wool greatcoat proving to be the Kevlar of the day. The adoption of the M1 was more or less concurrent with the bombing of Pearl Harbour and the rest, as they say, was history. Over the next three decades some 7+ million rifles were built in almost a dozen factories around the World, making this the nearest thing to a Colonial AK.

Dies, data and materials abound. However, the choice of hardware to wrap around it is limited. Armalon at one stage offered a modified Enfield No4 (PC Rifle) and Southern Gun Co still produce a unique lever-action AR15-variant and a straight-pull version too and there have been a couple of attempts at UK-legal mann-op M1s too. The same applies to the few revolvers chambered for it, not that this is any great loss! Head-spacing on the neck of the case requires vigilance when reloading and the resulting performance, whilst producing theatrical levels of sound, delivered only modest range and accuracy… indeed, at 300 yards a Butane-powered spud gun might do better! As a competitive cartridge it would only prevail in a single calibre event! For pest control there are a shed load of better options. Great history, but a limited future in much of the UK.