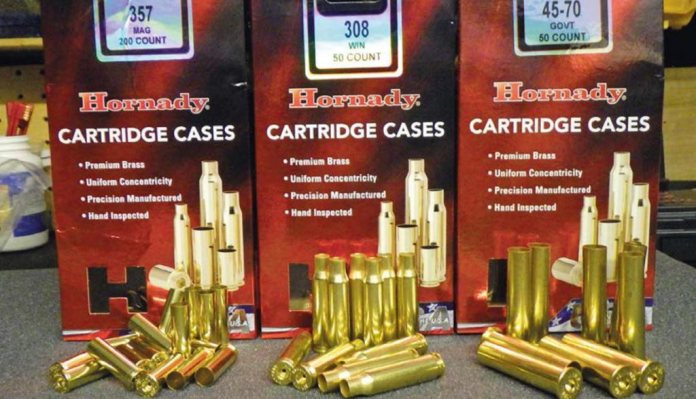 The brass cases on test include .357 Magnum, .308 Winchester and .45-70 government calibres. All three came in good quality boxes, preventing damage in transit, and the count in each box was exactly right. None of the cases showed any dents or damage and there were no visible defects.

Consistency where it counts

External dimensions are of course important, although they instantly become less relevant as soon as you resize the cases. The critical characteristic worth checking is their weight. Weighing is the best way to assess both the brasscontent, compared to other brands, and the consistency from case to case. If the weights are invariable then the internal dimensions - a critical measurementare also consistent.

Samples from each box were checked and in all calibres, the weights varied by less than 1%, a similar level of variance to Lapua brass. The .308 Winchester cases weighed slightly more than PPU branded ones, which do tend to be on the light side. PPU cases still reload well but their lower brass content seems to make them less suitable for neck-only resizing.

The cases chambered well straight from the box, so did not require resizing before first use (although a lot of shooters do this anyway) and they can be fire-formed in your gun first time out. The case mouths did need a quick chamfering, to remove the occasional burr leftover from the manufacturing process, but other than that they were ready to go, saving a lot of prep time.

All three calibres loaded without any issues, on a variety of reloading presses. The primers seated faultlessly and consistently, plus all of the cases gripped the bullets extremely well. All the reloaded ammunition chambered and ejected smoothly.

The ammunition shot without any issues and spent cases ejected easily. None of the brass showed any blackening on the outside, which is an indication that they expanded in the chamber properly on firing. The fact that they ejected without any resistance showed that they have ‘sprung-back’ to size after the chamber pressure dropped away. Overall, great performance.

Back at the reloading bench, none of the cases showed any cracks, required any trimming to length or had sustained any ‘injury’ during firing. They were reloaded again and all went well, still gripping bullets properly, a sign that the brass had retained its allimportant springiness.

Hornady cases are undoubtedly high quality, on a par with their bullets, and the consistency is very good. Being that bit more expensive than some other brands, they might not be the first choice for day-to-day shooting but for competition and where top-end performance is required, they make an excellent choice.