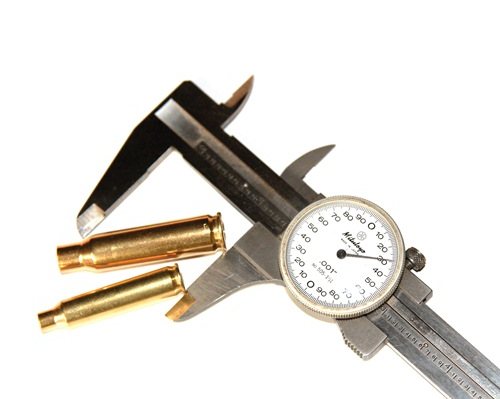 As reloaders we know that the humble cartridge case is infinitely reloadable, or not as the case may be! I slavishly collect as much of my fired brass as I can to be recycled and spend a lot of time and effort cleaning, prepping and getting it ready. However, to more high volume users like the armed forces what comes out of their guns is seen as nothing but scrap. But one man’s junk is another’s profit and that’s where Top Brass Inc. comes in as they make a living out of buying ex-military fired cases and refurbishing them for the civilian market.

Edgar Brothers Ltd are now importing Top Brass products and sent me 223 Rem and 308 Win, well that’s what it says on the packet, but they are all from military ammunition so the actual case spec is 5.56 x 45mm and 7.62 x 51mm. All however bear the circle/ cross stamp showing that it’s NATO approved. My examples came blister-packed in 50-case, plastic trays so useful for reloading.

Top Brass describes their product as follows: ‘Mixed headstamps sourced from once-fired military brass. Produced from primarily mixed-year LC (Lake City Arsenal) with smaller amounts of various other NATO-spec brass. Cracking open the 5.56mm showed that it was all LC with dates primarily from 2008 and 2009.

All the brass is boxer-primed and reamed (crimp removed), cleaned, full-length sized, and trimmed to 1.75”(+/-.003”) for the 223 Rem and 2.003” (+/-.005”) for the 308 Win. My vernier caliper confirmed this with an average case overall length deviation of .003” usually on the plus side. Ammo manufactured with the cases chambered and cycled easily in 223 Rem and 308 Win rifles. However, you must bear in mind that this is military brass and doubtless used in selective fire assault rifles and medium machine guns.

Generally speaking the build is marginally heavier as the loads used will be running at top end to ensure reliability in automatic mechanisms. Some of the 7.62 rims showed nicks and dents where they had hit the ejector. Also interior volume will probably differ when compared to a civilian case, so for example a load of 24-grains of Varget will fill a Lake City 5.56 case more, with a subsequent variation in load density/ pressures etc.

FOR: A cost effective product for the hand loader
AGAINST: This is once fired military brass Internal volume may differ
VERDICT: Worth a look Headstamps and dates can vary