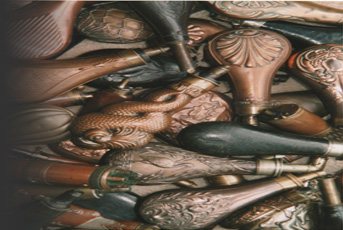 As soon as firearms became portable it was evident that shooters – whether military or sporting – would require some method for carrying their ammunition.  In the early days this was flints, powder and ball (or shot), the former being supplanted by percussion caps in the 19th century.  In the military field all three were made obsolete with the invention of the metallic cartridge, but sporting shooters still use muzzle loading weapons today and have the same requirements as their predecessors.  A couple of spare flints can be carried almost anywhere on the person and likewise lead projectiles are easily transported, in a flask in the case of shot, and a bag for the ball. Percussion caps can be carried in a tin, a separate compartment in the bottom of a flask or in a box inlet into the stock of a pistol or rifle.  But when it comes to powder there are a couple of overriding factors, which are to keep it dry and away from anything which will cause a spark when struck. This last consideration accounts for powder flasks being manufactured from a variety of materials including brass, copper, leather, horn, bone, silver, ivory, glass etc. (Anything that will suit the purpose and won’t ‘spark’).  With this in mind it will be seen that powder flasks can be a very interesting collecting speciality in their own right, or as an addition to a collection of early firearms.

The shape of flasks made from horn or bone is determined by the configuration of the material itself, whereas all of the others usually conform to a similar basic outline.  This is a narrow neck tapering to a wider, rounded base with flat sides.  The neck end is fitted with a measuring device known as the charger, which may be either a fixed capacity spout or an adjustable one.

The chargers can be mounted to the top by screws or, in the case of many non-adjustable spouts, by being soldered.  The size of a non-adjustable spout will be commensurate with the size of the flask and the weapon with which it is intended to be used.  A small pistol flask will have a spout throwing a charge of a few grains for a .28 calibre pistol, while the larger flask for a fowling piece will dispense several drams of powder.

The adjustable spouts will be graduated with two or three different volumes and are usually, though not always, found on the larger flasks.  If your collection includes European and American flasks then two different weight systems will be found, indicating the capacity or the amount of charge a flask throws. Flasks may be marked in either troy or apothecary measurements. Be especially careful if you plan not only to collect, but also to use your flasks for shooting old muzzleloaders. What may seem a correct charge from one may indeed be excessive from another.  It is wise to weigh the amount of powder a flask throws before using it for shooting.

Flask tops, which include the operating lever, are to be found in two basic designs.  There are the plain or common tops with an exposed spring around the charger, and the “patent top” designs where the spring can be exposed or hidden inside.  There are a number of these patented tops but, along with the common tops, all operate in a similar manner. Pushing the operating lever against the spring opens a hole at the base of the spout.  Tipping up the flask – keep a finger over the top of the spout – allows the spout to fill with the desired charge.  When the operating lever is released and the flask inverted the powder charge is left in the spout ready to be poured into the muzzle or cylinder of the weapon.  Shot flasks, often leather or leather covered have their own special style of patented tops. They were more often than not made by the same manufacturers as the powder flasks and in some cases had the same patterns embossed in the leather.

The variety of patterns means that a collection can be sub-divided in to a number of categories or you can choose to collect only one or two pattern variations.  Some of the more common designs you will encounter are scroll, game portrait, flags, bird, dog, foliage, medallion, eagle, martial scenes etc. Choosing only two or three from this list would give the budding collector considerable scope to build an impressive display.

A word of warning at this point.  Many antique pattern flasks are being made today on the same dies that were used over 150 years ago, so don’t be surprised if you find a real bargain in a mint example. It may indeed be brand new!  The collector may well wish to specialise in only flasks made by one particular maker and here again there will be no shortage of choice.  Famous names include; James Dixon & Sons,  G. & J.W.Hawksley,  Bartram & Co.,  The American Flask & Cap Co. or Sykes, who have all produced enough diversity to keep you searching for some time.

Those used to seeing only flasks intended for use with modern reproduction revolvers or long arms may be surprised at the variety of sizes to be found among antiques.  The smallest are those for pistol/revolver, medium for rifle/musket and large for shotgun/fowler.  Even larger flasks were made for punt guns or line-throwing weapons.  Capacity ranges from a few ounces to several pounds of powder, and corresponding size from a few inches to over a foot long.

As with other collecting fields, prices will vary according to condition and rarity.  It would be quite easy to build up a sizeable collection very quickly for a reasonably small outlay. Remember that damaged items will be harder to sell later on when you wish to improve your collection, so unless you have some aptitude for repairing, stick with flasks without too many dents or bad knocks, and with the seams intact.  If you do decide to carry out minor repairs, be careful.  Although a flask may be over one hundred years old, any powder inside can still detonate, so don’t smoke or use a naked flame when handling old flasks.

The usual venues for arms and arms related items could be used to source powder flasks – arms fairs, auctions and occasionally the arms press.  Added to these can be antique shops, house sales and even car boot fairs, where, if you have done your homework, you will be better informed than the vendor and may just grab a bargain.

A display of flasks can be very decorative and need not take up a great deal of space.  Glass topped display cases can be purchased reasonably cheaply (or made by yourself) and can be wall-mounted or set on a table or desk.  Whilst a group of shiny flasks may stand out a little more, they are best left unpolished and with their years of natural patina.

Finally do not forget to keep a record of your collection for insurance purposes, just in case the worst happens.  A few features such as material, maker, size, pattern (both sides) and any markings, along with a photograph, are a good idea.  In these days of computers, a CD or DVD will store all of this information conveniently, for retrieval as and when required.

There is really only one book to buy if you are serious about flask collecting.  The Powder Flask by Ray Riling is the Bible on the subject and will be of use to both the novice and the experienced collector alike.  Detailing over 1500 specimens in its five hundred pages, it will give you all the information you need to pursue this fascinating sphere of collecting.