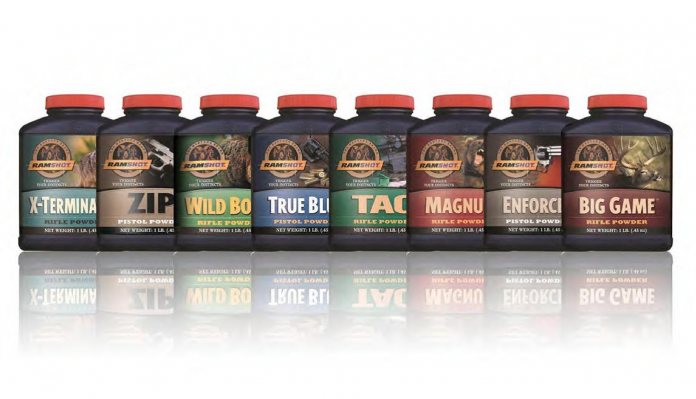 Last month, I looked at Ramshot’s Wild Boar; this time around, it’s Hunter. Made in Belgium, and as with all their powders, it’s a double-based, clean burning and high-performance propellant that is perfect for medium to larger cartridges, such as the 6.5 Creedmoor and 6.5 x 55 Swedish, 270 Winchester, 300 WSM and 338 Win Mag. Ramshot have this to say about it; “It’s the only spherical powder in the popular 4350 burn range, making it ideal for a wide range of calibres. The excellent flow characteristics allow accurate metering and consistent shot-to-shot results.”

Being double-based, it will burn hotter, so eventually cause accelerated barrel wear. However, any barrel is a lifed item and when it dies you simply replace it and everything wears out in the end, so what are you going to do? A hunting rifle is perhaps less of a concern than a target gun, due to the lesser round count you might expect!

Burning rate wise, it looks like Hunter is just behind the following- Vit N160, MR4831 and H4831, H4831 SC and Vit N560. I have used all these in my three selected calibres. Its spherical form is very fine and tests through a Hornady, Bench Rest Grade Lock-N-Load powder thrower showed extremely consistent results, that pretty much came in on the numbers every time! With few exceptions I handload all my ammo and use a thrower set to slightly under the required charge weight, then top up with a powder trickler to get dead on the figure on the scale. However, with the Hunter, I could have missed out that step.

The Creedmoor used Hornady’s new 143-grain ELD X bullet with a minimum charge of 41-grains, giving 2450 fps and the maximum of 45.7 at a surprising 2959 fps/2790 ft/lbs and some seriously tight groups. Using the same bullet in the 6.5x55 Swedish resulted in near identical performance, though here, charge weights are slightly lower at 38.4-grains (minimum) at 2430 fps and 42.7-grains (maximum) at 2675 fps/2280 ft/lbs, to include the original and weaker M96 action. Saying that, my modern Mauser M03 is a strong build and more than capable of handling the Creedmoor data if you fancy it!

With 270 Winchester, I generally use a 130-grain Nosler AccuBond bullet; which, with 57-grains, goes out at 2960 fps/2542 ft/lbs, as opposed to the quoted 3143 fps, due to the slightly shorter barrel. However, it compares very well to the Winchester factory load in figures and performance. Sometimes, a heavy bullet can be good too, so I tried a 150-grain Nosler Partition with 52-grains of Hunter for 2808 fps/2638 ft/lbs. Ram Shot Hunter proved a decent powder and is worth getting some to see if it suits your needs, which it doubtless will!