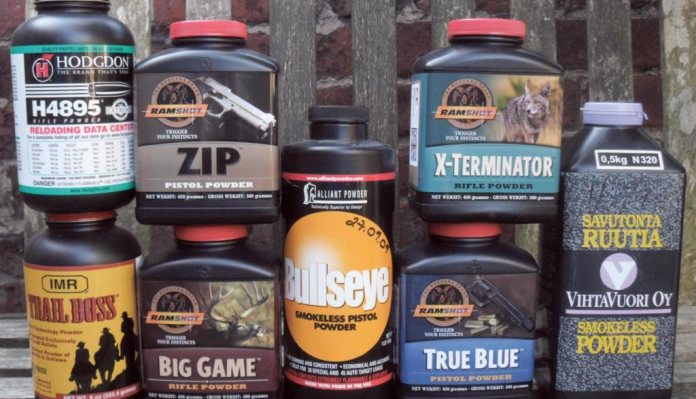 For the purpose of this article, the powders referred to are modern smokeless powders, also called propellants. The powder is the driving force that propels the bullet through the barrel and on to the target. It does this by changing very quickly from a solid to a gas, with a much greater volume, without raising the pressure too suddenly like an explosive would. From the time the primer ignites the powder, to the instant that the bullet exits the barrel, the gas generated by the burning powder will continue to apply pressure to the bullet, accelerating it until it reaches the optimum velocity to leave the barrel, this is referred to as the muzzle velocity and is often included with the loading data for a particular load.

One of the biggest advantages of modern smokeless powder, is that the rate at which it burns can be controlled easily, making it useable in a variety of applications. Powders for use in rifle, pistol and shotgun each have different burn rates, to suit the type of gun. Pistols powders have only a short amount of time to get the bullet up to speed due to the pistol’s shorter barrel and for this reason, burn faster. Shotgun powders also burn quickly, to ensure that they burn completely under low pressures. Rifle powders are relatively slower burning, continuing to burn longer, to generate pressure and accelerate the bullet all the way down the longer barrel. They provide a long source of pressure, rather than a short burst, giving the bullet a longer ‘push’, rather than a shorter, sharper, higher pressure hit.

Different burn rates are achieved in two ways; either with chemical coatings that inhibit the burn rate, or by varying the size and shape of the grains of powder. In common with all materials, the more surface area there is, the faster something will burn. So, powders with smaller, flatter or even hollow grains will burn that much faster than larger solid grains of powder. With powder grains varying considerably in appearance, the reloader can often recognise some powders by appearance alone. Until very recently, the superb Trail Boss powder from Hodgdon was available in this country and its grains were a very distinctive ‘polo’ shape, a flat disc with a hole in the middle, there was nothing else quite like it.

Modern smokeless powders are pretty much stable and are not overly sensitive to impact. They are however highly flammable and should not be exposed to any risk of ignition or very high temperature. If kept in their original containers, unopened, powders will last for years and even once they are opened they will still keep for a long time, as long as the lid of the container is kept tightly shut. If powders are left open to the atmosphere, then some of the volatile additives used to stabilise them may well evaporate off, affecting the way the powder burns. Common sense dictates that powder should be stored away from heat or sources of ignition and, of course, out of the reach of children. Also, do not keep it in closed metal containers that could act like a bomb if subjected to a fire.

When you consult reloading data, you will find a list of bullet and powder combinations for the chosen calibre, which one you choose will be up to you and may well depend on availability and price. It is most important to remember that the data should only be used with that exact combination of powder and bullet. You should never substitute another powder, as it is not safe to do so, and you could well cause yourself, and anyone near you at the time, serious injury. The powder manufacturers carry out extensive testing, to come up with the published load data and they are able to ensure that the given loads generate pressures and velocities that are safe. The data will usually include both a maximum and a ‘starting’ load and it is well worth sticking to those loads, following the instructions to the letter. Wherever you purchase your reloading supplies, you can generally expect to get help and advice on what will be best for your chosen calibre and gun, but the most reliable and important data will always be that published by the powder manufacturer.

There will be a number of different powder types available for a given calibre and bullet weight, all of which may well be equally accurate. As a general rule, powder loads that fully occupy the space within a case perform more consistently than those that only partially fill it, leaving an air space. This may be because the powder can shift around in a case with open space, so the way it burns varies according to the position of the powder within the case on firing. Occasionally, reloading data may include compressed loads, where the powder has to be pressed down by the bullet in order for it to be seated in the case. These loads should be approached with caution; too much compression can cause the case to bulge or the loads to perform inconsistently.

Choosing which make of powder to use will often be down to what your local dealer stocks, as they don’t all carry all of the brands. One of the newest brands on the market is Ramshot, imported by Henry Kranks, which is becoming more widely available through other retailers. Their range of powders covers a wide variety of applications and will be ideal to replace some of the other powders that have recently been banned by new EU regulations. Their reloading data is also extensive and for that reason I use their powders in all of my pistol loads and most of the rifles too.

Different powders are also sometimes harder to reload with than others, with the size and shape of their grains affecting how they flow through the various powder measures. Trail boss for example, although a great powder, sometimes stops flowing through the powder measure, as the grains ‘bridge’ the powder hopper opening and needs a nudge to dislodge them and get the flow moving again.

I will look at the different options for measuring powder charges next time, and some of the equipment available.