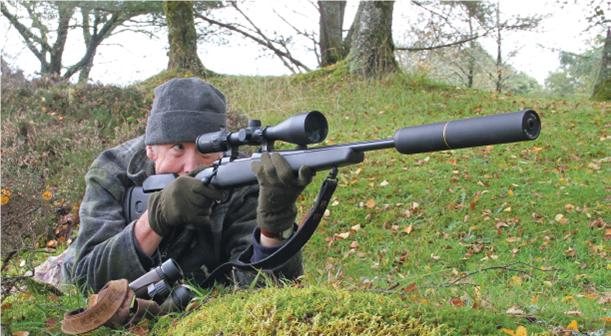 In the old days we had to make do with older military powders or one or two main brands for our rifle reloading, no more, thank god! The reloading market has literally exploded with every conceivable combination of propellant, projectile and primer, as well as some superbly accurate reloading kit to make the perfect load achievable.

With the advent of the hugely popular 6.5mm Creedmoor cartridge amongst precision target shooters as well as hunters alike, it is no surprise that special niche powders ideally suited to that round have emerged. Take the Alliant RL16 or the Swiss RS62 for example that have equivalent burn rates. Well, Vihtavuori is now offering the new Viht N555 recipe that forms part of their High Energy range of propellants that deliver maximum performance with a smaller load for efficiency.

Trying to optimise any cartridge especially in short action calibres with relatively heavy bullets and shorter barrels in the case of hunting Creedmoor rifles has always been tricky. But this new Viht N555 might just save the day!

Being part of Vihtavuori’s high energy range, which usually burns at a higher energy/heat of ignition of 4000kj/kg, N555 burns at a lower 3700kj/kg. This still provides the extra combustion energy required for higher velocity but means it burns at a cooler rate and thus should be less temperature-sensitive. We all know that hotter propellants will increase wear and bore erosion, so something that does the job but works at lower temperatures will technically be kinder to barrels i.e. less erosion especially in the throat area.

The N100 series of powder is a single base propellant whilst the N300 powders are also single base with a porous structure. I use N320 for subsonic .308 Win. With the N500 series, Vihtavuori uses an impregnated powder granule with nitroglycerine to give an energy performance boost.

N555 has a burn rate similar to Alliant’s RL16 or Hodgdon’s H4350, so in that tricky midground where a smaller case and projectile combination is hard to get the correct load density to maximise performance. It is a short cut extruded type so meters well through powder measures.

In fact, N555 was specifically designed for cases like the 6mm and 6.5mm Creedmoor, as well as the .260 and .284 Win where a relatively large case capacity but smaller bullet diameters are the norm. But it also serves ballistics well in other cases like the 30-06, 280 AK and my 7mm AK, which is something to be considered.

N555 also contains an anti-fouling agent so that it burns cleanly. This will keep copper fouling to a minimum and thus maintain accuracy and consistency for longer, so extending the periods between cleaning, which all sounds good to me.

Crucially N555 is the most stable powder in this class and so is very temperature insensitive, which is good news both for hunters and competitive shooters alike. This means that consistent accuracy and trajectories can be relied on in any adverse or hot weather conditions.

Another fact that is just as important is that Vithavuori spends a lot of time maintaining the lot to lot consistency between their powder production. So, you the shooter can rely on that propellant and bullet combination in your rifle staying the same even if you use several different lots of the same N555, which is more important than it first seems. Storage is crucial too, and N555 has a shelf life of ten years if stored at 20ºC and relative humidity of 55-65%.

I had a new Sako Carbon Wolf in 6.5mm Creedmoor with a 20” barrel, perfect for hunting and a 26-inch tube on an RPA Quadlite custom to see if I could stretch its legs a little.

Reload kit wise, I bought a set of Hornady Match dies, it’s a two die set, number 544655, that includes a Micro-adjust Vernier type seating depth gauge for maximum accuracy. The other die is a bushing-type, so you can match the bushing to the actual case you want to resize. I used a 0.290” sized bush as a loaded round was 0.292” on the neck diameter and so a 0.290” gives enough tension/grip even with a bit of brass spring back. A 0.289” would give more grip in a rifle out for hunting and the rounds being bashed about in the magazine.

Plus, a set of Lee dies from Hannam’s Reloading, these are excellent value for money and have four dies, a full-length sizer, collet neck sizer, dead length bullet seater and factory crimp die. If you can’t reload an accurate load with these, take up golf!

I was a bit disappointed as I was reaching max load density for the case before any real pressure signs arose, so I reckon I could have pushed it a bit further. I did swirl the powder and use longer drop tubes for dispensing, which achieved a better load density. The Viht N555 certainly worked better with the heavier bullets i.e. 130-grains + in these rifles. Quickload Ballistics program is very good at predicting initial loads, but especially with the Creedmoor, cases show such variation you need to manually enter your cases true internal H20 capacity and then shoot and see.

The best load for hunting was the Nosler 130-grain Accubond who’s weight is a good blend of light weight for speed and heaviness for energy transfer. Three shot groups were less than 0.5” with the Sako Carbon Wolf at 100 yards using a load of 44.5 grains of N555 for 2722 fps|2139 ft/lbs energy. Not a top load, but very consistent and mild to shoot too.

Best long-range load went to the Lapua Scenar 139-grain bullet travelling at 2834 fps/2478 ft/ lbs and minuscule 0.35” 100 yard groups so long-range silhouette clanging to 500 yards was a doddle. I use a 7mm Mauser AK rifle built on a Tikka M65 by Callum Ferguson and wanted to see how N555 would perform with this cartridge too.

The leading load was with the new 150-grain, Sierra Tipped Game Kings, which is a nice all-round bullet weight for this calibre. With a COL (cartridge overall length) of 3.071”, Federal large match primers and 52.25-grains of N555, the load produced 2792 fps|2596 ft/lbs energy with keyhole groups at 100 yards. This fills the case 100%, however, the same charge weight but this time using Swiss RS62 gives 2820fps|2648 ft/lbs and only a 94.5% full case. Accuracy was less than 0.5” so in my gun is the few extra fps from the RS powder better than the accuracy of the N555 load? I’ll take accuracy every time.

I have shot quite a few 6.5 Creedmoor rifles now and they vary quite a lot and especially with the different cases available and thus strength and internal capacity. Equally, small or large primers used, not to mention custom chambers and throating’s, and remember powder burns and expands prior to the bullet engaging the rifling so pressures differ. I would recommend firing a case in your rifle’s chamber and seeing what the water capacity of your brass is before you attempt reloading or resizing as this will give a better idea of the true powder volume available. Buy a small 1 Lb tub and experiment yourself to see how your rifle performs. With H4350 nonexistent and Alliant powders a tad scarce, the new Viht N555 might just be the best allround Creedmoor fodder as well as many other cartridges, it is certainly consistent and clean-burning.