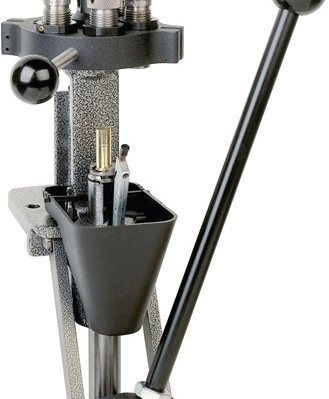 What’s the best reloading press? A bit of qualification is necessary to make some sense of it. The vast majority of designs share a number of common features, not least of which is the size of dies that can be fitted to them. The default thread size is 7⁄8” x 14 TPI (threads per inch) diameter. If you require something bigger make sure the machine comes with an adaptor for this thread. This in common with most leading brands has a screw-off insert to suit.

Power is provided by a compound leverage system that gives good mechanical advantage to move a steel piston (ram) up and down to which the case mounts by a removable shell holder. Almost all press bodies (the frame) are constructed from either cast aluminium or cast iron with a few fabricated from machined and cast components held together with rods, nuts and bolts. To ease movement simple bearings are fitted on the fulcrum and where the ram travels through the frame. Most common are self lubricating Oilite sintered bronze designs, a highly compressed mix of metal powder usually impregnated with an SAE30 lubricant. These are ideal for the purpose but are easily wrecked by the ingress of crud from the case prep process, especially primer residues. Cleanliness is essential.

BEST, CHEAPEST AND MOST ACCURATE

There are a number of design options that relate to production capabilities and design. Most common is the single station machine. That is a single ram to mount a shell-holder and a single threaded hole for the die. There are two build-styles the C and O-frames. The C is open at the front giving good access but with less integrity so it can flex under the extremes pressures created by processing the case. The O offers a full frame and is far stronger/rigid though with slightly less front access, but is really the best choice.

Most are primarily designed for right handed use, a few have a frame offset and operating handle mounting that make left handed use more practical. Some manufacturers offer a compromise solution that allows the operating handle to be mounted to the left or right. These presses are amongst the lightest, most portable and are ideally suited to low volume, high accuracy ammunition production. If your batch requirements never exceed 100-rounds, or your annual usage is less than 500 then these are the designs for you. If you’re new to reloading I would strongly recommend that you start with one of these, regardless of your aspirations.

Our final category embraces the progressive family of presses, subdivided into manually indexed (including turret), auto indexing, hybrid and motorised designs. Turret models are best described as multi station ‘C’ presses and generally feature a standard ram and shell-holder configuration. However the top of the frame has a rotating indexing plate with (usually) between four and seven tool and die stations normally in 7/8 x 14 TPI. Closed frame versions often have an interchangeable plate or disc multi tool holder in the top of the frame. These models represent best cost/benefit to those who only reload reasonable quantities of a single design of single cartridge and can ‘set and forget’ the machine. However, a single pull of the handle only produces one function, slowing the production process.

Progressives offer one round for every cycle of the operating lever, which is impressive. My upgraded Dillon RL 550B being a good example of the genre. Instead of a single shell-holder we have an indexing shell plate that is turned under the fixed position four station die holder. Standard dies can be used with the proviso that a ‘through-the-die’ powder dispenser must be installed in the neck expanding station. It’s good for 5,000 to 10,000 rounds per year. Remember that you get a lot less ‘feel’ with these types of machine, meaning that any issue with case neck condition, runt bullets or damaged primers may not be obvious until you find powder all over the floor or try and chamber the round. Speed of production does not make up for bad operation; here you can count your mistakes in 100s if you get it wrong!

Auto indexing and motor drive progressives are at a wholly different production level. They’re really dedicated to massive production quantities of a single calibre using new brass. Costs reflect their complexity and level of performance. Unless you own a factory or intend to spend every daylight hour on the range then they’re not for you.

Super portable designs like the Lyman Acculine that employ standard dies but operate like crude chest expanders are at the minimalist end. Dedicated lightweight designs for non-resizing bench-rest use include the tiny Harrell’s Precision Compact calibre specific BR models. Cheap, good and effective is Lee’s hand Press, which is a scissors-type design and can easily re-size fired cases too.

Reloading presses have been around since the late 19th Century, one of the oldest coming from the engineers at Frankford Arsenal. These early designs were often single calibre and commonly based on an arbor process where the tool or tool station is pulled down the main pillar of the machine, often employing a compound lever system that gave a huge mechanical advantage at the expense of limited linear travel. Presses from Hollywood, Wamadet, Star Universal and Dunbar come to mind. Ironically, RCBS have recently reinvented the wheel, claiming their new and expensive Summit moving die arbor press to be ‘innovative’. Hmm.

One novelty was the Herters Super Model 81, a C-frame with side-by-side stations and twin shell holders. CH4D (Champ) still produce their hefty Model 444 double arbor ‘H’ machine as well as their Champion, one of the beefiest O-frames around and featuring interchangeable 1” and 7⁄8” thread inserts.