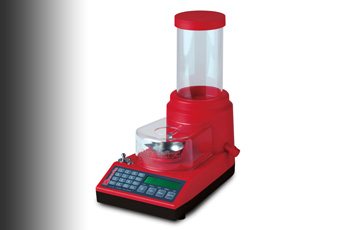 There are a number of ways of dispensing the correct amount of propellant for your reloads. Probably the most precise is weighing individual charges then adjusting it by adding (trickling) small amounts to the desired amount. Long-winded but certain! Conversely you could go for the convenience of the adjustable-volume powder thrower; in truth you can expect a little deviation, but nothing serious… A final solution is to combine the functions of a powder thrower/trickler with an electric scale to give a machine that at the press of a button throws a near prefect powder charge time after time.

RCBS started this revolution off many years ago with a truly massive creation that did it all but proved slow. Things have improved considerably as Lyman got in on the act with their Automated Powder Dispensing System, now it’s the turn of ammunition and reloading giants Hornady with their latest product, the Lock-N-Load Auto Charge.

Simplicity is the name of the game here and Hornady has done its research to give a machine that does the job easily. There are not pages of instructions and they have also included a simplified power adaptor that crosses the pond successfully. Only requiring a British three to two pin adaptor.

The Auto Charge is not that big and comes with powder tube and lid, 10 and 50-gram check weights, cleaning brush, power adaptor, powder pan, scale platform and cover. Up front is a key pad, with function buttons and a back-lit screen (black on green), these include 0-9, mode, enter, speed, units (grains or grams), back cancel, cal (calibrate), ON/OFF, zero, trickle and dispense.

To assemble slide the powder tube into the top of the hopper/dispenser and place the platform in position, the power lead jacks into the left of the base and the check weights slide into cut-outs to keep them handy. At the lower right of the hopper is an angled tube with a rotary valve, this allows you to remove the powder when you have finished.

Hornady recommends a 5-15 minute warm-up/stabilization period, which is a common requirement for this sort of machine. They also say that accuracy is improved by using the removable cover that surrounds the pan/platform. Likewise it should be used on a solid bench and away from vibrations, electrical devices and air currents in a temperature-stable environment. Again this is normal procedure.

The instructions are precise and easy to follow; suffice to say I would always recommend you calibrate the unit prior to use, which takes a minute. Once done place the pan on the platform and press zero and you are ready to go. One tip; ensure the cut-out in the cap on the powder emptying tube is at 12 o’clock.

Under the display window are five labels – auto, manual (these two for operational modes), slow, normal and fast which indicates the trickling speed. What you will now see is TARGET 0.0 on the left and 0.0 on the right with either GN (grains) or GR (grams) selected. There are two triangles one of which will be pointing to AUTO or MANUAL function and the other on one of the speed settings.

Fill the hopper with propellant and punch in the weight required, note here the machine always puts in a decimal point so for example to load 56-grains you will need to press 5,6 & 0 (56.0). Or 56.8-grains as 568. If you want to delete press back/cancel until 0.0 shows. Once set press DISPENSE and the motor will rotate the dispenser tube and start filling the pan, as it gets to the target weight it will slow down and trickle individual kernels until it stops, indicated by a short beep.

Hornady says the Auto Charge will throw to a maximum deviation of 0.1-grain! However, this is reliant on the size of the individual powder kernels in relation to the speed setting. Finer powders such as Vihtavouri N133 can handle being trickled at MEDIUM or FAST, but the larger/medium Vit N560 on this setting nearly always goes over and has to be done at SLOW. In this case the machine recognises the problem and indicates it by a long beep and the word OVER in the display.

Using my RCBS (Ohaus) 10/10 balance beam scale as control the Auto Charge showed that it could keep the deviation down to 0.1-grain, which is not bad as that’s just 1/70,000th lb. In general this threw under rather than over-weight and is probably a minimum of 70% better than a manual, adjustable volume powder thrower.

So nice and consistent in terms of the completed reload, which is what it’s all about! However, one aspect of these machines you have to live with is time taken to throw a charge. On average with the Auto Charge you can expect a 20-40-second operating window, with most of it taken up in the final trickling stage. Which has little to do with actual weight of powder dispensed. In reality you could expect to throw a minimum of 60+ charges per hour.

Now the messy bit – getting rid of the powder. Opening up the emptying valve will dump 99% of the powder back into the container. However, bear in mind that there is a significant amount still in the dispenser tube and also some clinging by static to the plastic casing. Here you can tip the unit back and manually operate (trickle) to rotate the tube so its aperture is pointing down to 6 o’clock to dump the last of it out. Then take the brush and sweep out anything left. This is critical as you do not want to be mixing propellants. One final tip - do not pull the plug until you have switched the machine off, just in case it buggers it!

I have to say I like these automated powder dispensers and the Auto Charge is one of the best; being, consistent, accurate, simple and easy to use. It suits my reloading needs, which these days are all about precision and not about just churning out rounds as fast as possible.