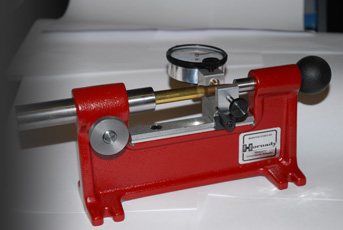 Reloading is a game of variables – too high, too low, not enough too much, too long too short. In general most modern equipment is capable of turning out decent ammo with some proper in-put from the reloader.

I still hand weigh/trickle every powder charge, use cases of the same make/batch and check the COL (cartridge overall length) with a Vernier caliper. I even half seat the bullet and then rotate the case 180º and finish the job to try and reduce misalignment.

Despite all this a bullet can go in crooked, even though it might not look like it and though pushed into the chamber can even enter the rifling off true. Sure it will shoot but it might not set up properly, which could result in a reduction in accuracy. Given you have done everything else right, Hornady’s latest product the Lock-N-Load concentricity tool could be useful.

Using their Cam Lock case trimmer as the chassis Hornady have modified it with a bar with a concave face that will hold the rear of the cartridge central. Up front a second sprung arm with a smaller concave nose centres the bullet so the round lies parallel. Spare front arms are included to cope with different bullet configurations and calibres.

The bed of the frame has a travelling saddle that holds a dial, clock gauge graduated in 1/1000” opposite is a nylon-tipped adjuster screw. Operation is simple – the round is placed between the two centres and the plunger of the gauge adjusted so it touches the widest point of the bullet just at the parallel section of the bearing surface where it meets the curve of the ogive.

The gauge is zeroed then the round rotated 360 º, which will show how far off its axis it is. Generally speaking a run-out of 0.002 – 0.003” is acceptable. If it’s any more then the adjuster screw comes into play and is used to literally push the bullet back in line. Hornady say this is done at the widest point of variation.

I was a little intrigued to see how my ammo matched up and in most cases it was 0.003” with some drifting towards 0.005/6”. A bit of trial and error got the errant ones sorted. Range time showed that those occasional holes that drift out of your nice tight group for whatever reason seemed to reduce a bit. So it works…

As I no longer load for quantity but quality as I’m shooting live targets, I am prepared to invest a bit more time and effort into checking my ammo. However, it’s certainly not for everyone! None the less; if you want to reduce the variables a bit more it’s worth consideration…

For: Removes one more variable from the reloading process
Against: You either have the time and interest to use the tool or not
Verdict: Will offer you the ability to produce technically better ammo