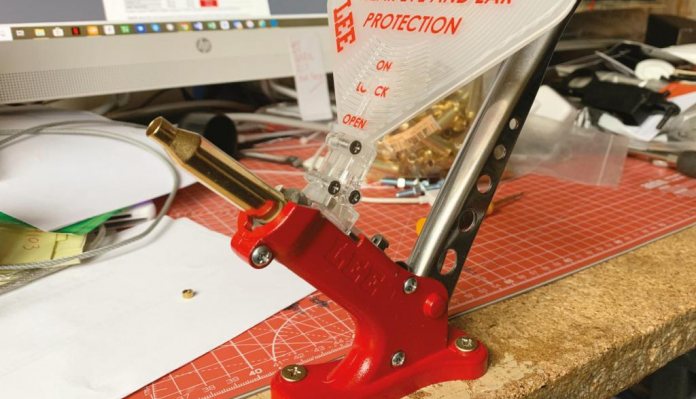 Let’s face it, re-priming your brass is an unavoidable chore and one of the best tools for the job is Lee Precision’s, hand-operated Auto Prime. It comes with two 100-primer trays (large and small primers) and uses a dedicated shell holder. What it offered was a real finesse for the job, as you can feel the primer going in and bottoming out, so it sits just below the pocket’s mouth. Now priming is easy and can be done sitting in front of the TV for example. Adding to this family, their benchmounted version; the Lee Auto Bench Prime.

As the name suggests, you can screw it to your reloading bench, or to a section of board, making it portable. The main body is aluminium alloy, in Lee’s familiar red livery, which attaches to the surface by two bolts (supplied) and will also mount to their Bench Plate System. At the back is a 7.5” steel operating lever and it comes with small (Sm) and large (LG) primer adaptors that slide into the top of the body.

As before, it uses their dedicated shell holders, which you must buy separately, but if you already use an Auto Prime you’ll have a set. Lee says that it was primarily designed to prevent the unlikelihood of mass detonations with certain brands, with the primers being transported by an elevator away from the load in the feed tray. However, it’s possible to single feed too.

Different is the single primer tray that can handle; both small and large sizes. This hinges open to fill and takes 100 and has a 3-position switch: OPEN (to fill) LOCK (filled with no feed) and ON (feed) this plugs into the top of the adaptor. It’s ridged internally, so a quick shake will place them all anvil-up. So, slide in the shell plate, insert the full tray and flip the switch from LOCK to ON and give it a shake to ensure that the primers have slid down to feed and you’re ready.

In use, place a de-primed case in the shell holder, push the lever up against the rubber stop to feed the first one then pull it down and you can feel the primer entering and finally bottoming out, indicating it’s in all the way. Lee says that you only need finger pressure to do the job, but I found with a batch of Norma cases a tad more effort was required, but you can feel the whole operation and easily learn not to over do it. Now each time you operate the lever (as described) it will feed and prime.

There’s a bit of knack to it, as sometime the primers hang a little, especially when the capacity is lower, but a quick tap on the tray solves that. However, like any new machine, you just need to get used to it. For me, it gives more feel than the Auto Prime and also there’s no wrist/hand strain after a long priming session, as you are constantly squeezing and releasing its lever. As always, being a Lee product, prices are keen compared to the opposition, by a considerable margin.