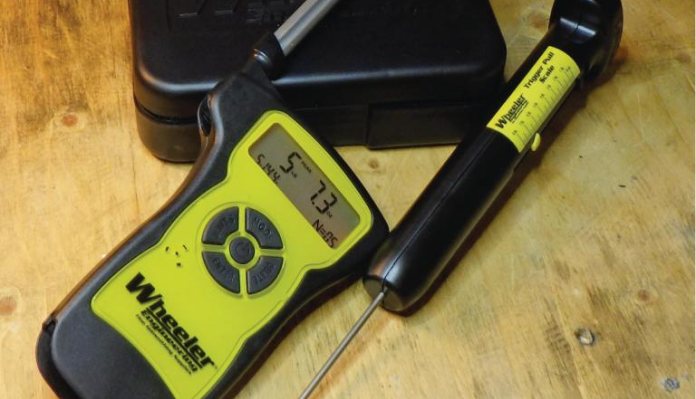 Trigger-pull gauges are a really useful piece of kit, particularly if you have an adjustable trigger and want to experiment with it to ensure you keep it safe. Going too light on the trigger pull weight can be a recipe for disaster.

The two gauges on test sit at either end of the range in terms of budget and specification. The first model is a ‘scale’ type gauge and uses a spring to measure the pull weight with a sliding scale on the side of the unit, with easy to read increment markings and an ergonomically shaped handle. There is also a resettable sliding indicator which stays at the maximum reading after the pressure is released which is really useful. This gauge is easy to use and the readings are very consistent, with five readings taken on a rifle varying by only a couple of ounces. The only downside of this particular gauge is the shape of the ‘hook’ that fits onto the trigger; it is not contoured to grip the trigger blade and does slip if you don’t angle the unit just right. A bit of tape on the hook easily resolves this issue with an otherwise great scale.

The second model is Wheelers Professional Digital Trigger Gauge which is a far more sophisticated product. The main body of the gauge features a large, and very clear, illuminated display screen and the soft-touch controls. A fold out arm on the side of the body carries the load sensor in the shaped ‘hook’ that engages directly onto the trigger. Operation could not be easier, with a powder button in the centre of the panel and the other controls in a circle around it. Sets of readings can be recorded and maximum and minimum functions are easy to select. This model measures to one-tenth of an ounce and when repeatedly testing the same gun the measurements were very consistent. An average of the readings stored can be displayed and you can also delete a reading if you do not want it to be taken into the calculation of that average, in case you snatch the trigger or do not pull at the correct angle. The attachment at the trigger is much better with this model and it is shaped to engage properly with triggers with a built-in safety blade. This model is also supplied with a sturdy storage case where it can be stowed when not in use.

During testing both of these units gave very consistent readings, with the digital model being much easier to read accurately. The quality of both models is very good and they are built to last. Either one would be a good investment, but the digital model is well worth the extra cost.