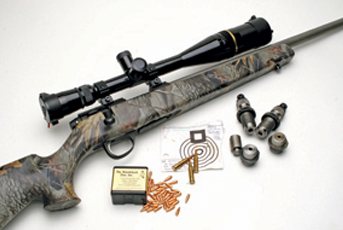 Small projectiles travelling fast have always ignited my interest as do Wildcat calibres and cartridges that seem to deliver superb ballistics whilst using meagre amounts of powder to do so! At the ranges I shoot the majority of my vermin at, and not withstanding my interest in long-range speciality rounds, I have become convinced that just enough gun is far better than too much. For example - a 250 yard fox and crow round that, would be reloadable, economic on powder, with low noise and recoil and above all accurate with enough energy to get the job done without overkill, what is there?

I had ruled out the .17HMR, it’s not reloadable and in my view not a 200 yard cartridge! The .17 Rem was too big and their .17 Fireball was not available at the time, so a Hornetsized case would be about perfect. The venerable .22 Hornet is a much under rated cartridge and would be fi ne but I wanted a smaller .17 or .20 calibre, and so my interest turned upon the .17 Ackley version, which proved to be a genuine 250 yard vermin cartridge and ideally suited for the British countryside.

The .17 Ackley Hornet (AH) is based on the .22 Hornet but necked down to .17 calibre and then fire formed (case reshaped) to eliminate its tapered shape and signifi cantly increases the capacity with up to 15-grains (dependent on the brass you use). All making for a highly efficient design. The great advantage over the .17 HMR round is that the AH is reloadable, so far more versatile with regard working up an accurate ammunition. Before we go any further and at the risk of teaching you to suck eggs; the 17AH is not a factory offering so it’s reloading all the way!

Any .22 Hornet rifle can be used as a donor, I have seen excellent conversions on Anschutz and CZs. I like the old Sako Model 78 which is a forerunner to the modern Finnfire with all steel construction which would make a reliable and light weight walking/stalking varmint tool.

My rifle was sorted by Venom Custom shop, sadly now defuncted! Richard Pope (Swift Precision Rifles) can sort you a .17 AH as he’s ex-Venom and a fine smith. My baby was fitted with a Pac-Nor, Super Match Grade stainless steel barrel. The bullets weights run from 15 to 25 grains, so a 1 in 10 rifling twist rate is advisable. A 1 in 9 can be used to stabilise a 30 grainer but to me it’s a bit heavy and compromises its original function!

I went the conventional route and choose a #3 contour, 24”, 1 in 10 twist barrel, which would ensure all the powder was burnt within the bore. Venom achieved a superb blue print of the action, so all the threads and faces of the action were trued to the barrel and therefore achieved a perfect lock-up between the two. The trigger - as on all Sakos - was perfect, and the action was bedded to leave the barrel free floating. The stock was a standard Sako sporter, which Hydrographics dipped in Real tree HardWoods HD to complete the custom look and aid practicality.

To reload the .17 AH you will need several dies for forming and case trimming as well as all the usual precision loading techniques. As with any custom ammo a few peculiarities arose! Most evident is the Hornet is rimmed which provides the head space, which is all about rim thickness. So any cases that do not have the same rim thickness as that of the head space gauge to which the rifle was set up will cause a discrepancy in measurement. I choose Winchester brass which has a consistent rim thickness that is compatible with my rifle. Yours might favour the Remington, RWS or PPU etc.

The .22 Hornet case is very tapered, so reforming it requires the use of two dies and an extended shell holder to properly support the case. Some chambers prefer a larger case body diameter so check you reamer dimensions. Start by running the virgin cases through the 1st form die which reduces neck diameter and puts a second shoulder into the body.

Die two forms the case further and squeezes it to an even smaller dimension and the excess brass protrudes from the top of the die. It is a simple matter to trim it back to length with a saw or file, sounds tedious but is worth doing properly!

Once removed the case necks are de-burred inside and out then put through the full-length size die. The end result is a reloadable case that with a bullet inserted and a reduced charge will be used to fire form it into its final shape. At this stage I’d recommend that the brass is annealed otherwise when you fire form, a proportion of cases will split due to being work-hardened.

Annealing means the brass is heated to blue /green colour and then quenched in water to cool. I know this sounds a pain but the benefits are really worth it, believe me. Load with a good ¾ charge and watch in disbelief as the ejected case has reformed to the chambers shape in the Ackley’s characteristic sharp shoulder and minimal body taper, marvellous…

The .17 AH is an incredibly efficient Wildcat utilising fast burning powders such as RL-7, Hodgdon’s H4227 and Lil-Gun, IMR 4198 and Vit N120. I primed each case with small rifle Federal Match Primers and then seated the bullets (20 and 25 grain) just off the lands i.e. just rifling engraved on the bullet where possible yet still feed in the magazine.

The extra light bullets such as Berger’s 15 and 18-grain MEF (Maximum Expansion Factor) are no longer available, but I included some data from my secret stash! With 11.5 grains of Vit N120 the 15-grainer sped along at 3956 fps, maximum velocity was achieved with 13 grains with an average speed of 4133 fps; serious crow medicine!

Most commonly available are Hornady’s 20-grain V-MAX (my all time favourite) .17 calibre projectile. 12-grains of RL7 gives a mild but accurate load with 3323 fps/491 ft/lbs, great for troublesome bunnies. Upping it to 13-grains yields 3540 fps whilst another 0.5-grains resulted in 3639 fps/588 ft/lbs. Cases were showing signs of incipient head separation so I stopped.

Changing to Vit N120, a top load of 13-grains yields 3883 fps which is snotting along, yet a shift to the faster burning Lil-Gun showed only 11-grains achieved 4119 fps/754 ft/lbs energy. You can substitute this data for the 20-grain Berger hollow point bullets that are extremely accurate with ½ MOA groups at 100 yards.

If you fancy something heavier 25-grains is probably the weight limit and again V-MAX or Berger are good performers. 12-grains of IMR 4198 powder pushes the V-MAX over the chronograph at 3399 fps. Substituting it with Vit N120 gives 3301 fps.

Best velocity went to 10-grains of Lil-Gun and 3417 fps but accuracy was average at 1” whilst a slower burning powder with 12.75-grains of RL 10X gave good accuracy and 3311 fps. Any of these would be a good fox load out to and beyond 200 yards in the right hands.

My loads were worked up in Scotland where it is cold and the Hornet can be very susceptible to heat variations so pressures can sky rocket; so reduce all loads by 2.0 grains as a starting figure. Chambers and barrel dimensions vary enormously and some of these loads are compressed but all safe in my gun, yours will be different! Remember any small change in small calibres makes a huge difference!

The .17 AH is a tremendously economic, accurate and efficient cartridge when compared to other .17 or .22 small capacity cases. Add a MAE sound moderator and my Sako .17 AH is my favourite varminter, I have faster wildcats such as a .17 PPC and .20 Satan but that wee Ackley does me for 90% of all my vermin shooting needs up to and beyond 200 yards.

I run my Sako ‘hot’ but a 20-grain V-MAX at 3700 fps is actually all you need as a cracking little round, less barrel fouling too. Forming cases is a drag - true, but with the new .17 Hornet from Hornady I wonder what awaits? Their case is similar but not the same, different body length and shoulder angle and their reloading data is quite conservative. Who knows, but it will be fun finding out.