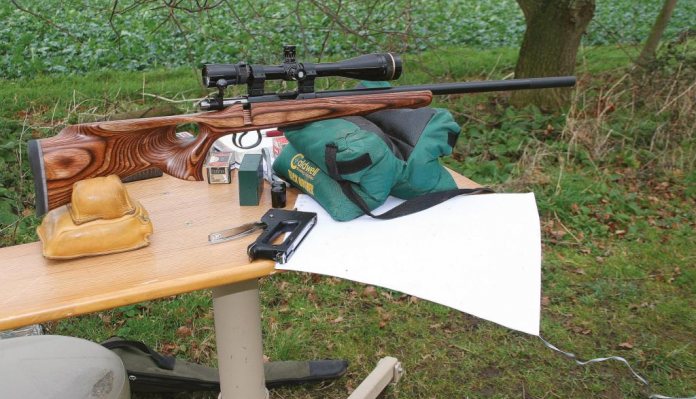 The .22 rimfire will do you for 90% of your vermin control needs, but there are times when a flat-shooting hard hitting round is required, especially if you need to control foxes also. Here, the .17HMR (Hornady Magnum Rimfire) has carved a very nice niche for itself in the British vermin shooter’s arsenal; as it solves the problem of the curved trajectory of the .22LR but its fast, light bullet can cause massive carcass damage on rabbits and hares! Due to the dual role nature of this round for light skinned quarry, such as crows and rabbits or larger species such as hares and foxes, I wanted to see how four of the most popular makes actually performed when tested head to head. Armed with this data, hopefully you can choose which make, bullet weight and design suits your needs best. The newer 17 WSM and 17 Hornet are now making in-roads into the popularity of the HMR, but it still remains very popular!

I used the tried and tested Ballistic Putty, which works very well for small calibre ammunition and gives a better indication of the bullet performance than the Ballistic Wax that I use for centrefire testing. I formed identical blocks of putty 10” long and 5” high and wide to allow the bullets to expand to their maximum, yet retain the wound channel and capture the fragments for analysis. Velocity and therefore muzzle energy was measured using a Chrony F-1 chronograph.

To ascertain the effectiveness of each bullet, the maximum penetration depth was measured, as was the terminal weight of the projectiles and of most importance was the total volume of the wound channel measured in millilitres (mls). The putty was set up at 50 yards and accuracy was tested at 100 using a CZ 455 Thumbhole 17 HMR rifle.

I chose four most common loads to test and reflect the differing bullet weights and styles available. Generally, 17-grain V-MAX bullets are the norm and designed to expand rapidly on soft skinned or furred vermin, such as crow and rabbits. I tested the Hornady Varmint load because this reflects other brands that also use essentially the same bullet, such as Winchester, Federal and Remington and in reality perform similarly.

Keeping with the 17-grain weight, the next up was the CCI TNT load that uses a Speer TNT hollow point, which is designed to perform much in the same way as the V-MAX. Upping the weight more, I chose the CCI Game Point, with its 20-grain load. Buildwise, it’s a protected soft tip with the open-nosed jacket contained the lead point, which has a dimple in it. It’s designed to expand more predictably, without disintegrating, as the V-MAX does! Being 3-grains heavier and perhaps slightly stronger in construction, meant that it would be better for larger vermin species, such as foxes, where you want deeper penetration before expansion.

Newest, and following the ethos of non-lead or lead free bullets, is the Hornady NTX (Non-Toxic) load. The bullet is lighter, at 15.5-grains, due to the lack of lead in its construction but it still has a plastic tip with sintered tin core and is designed to expand rapidly, like the V-MAX.

Firstly, the CZ455 rifle shot some really tight groups, which made it easier to connect with the ballistic putty centrally for each shot. Accuracy-wise, groups were very consistent and tiny at 100 yards. The Hornady 17-grain V-MAX and CCI TNT loads shot just over an inch, which is still very good for a rimfire, whilst the new Hornady NTX load grouped 5-shots into only 0.85” at the same range. Best groups went to the CCI Game Points, with their 20-grain JSPs grouping an average of 0.65”, which was superb!

Accuracy is crucial to ‘hit’ the target, but so is actual bullet performance when it gets there, which is the point of these tests. Starting with the bog standard Hornady 17-grain V-MAX at 2593 fps velocity, this penetrated the least, at 4”, which can be a good thing, i.e. all the energy is dissipated into a small area quickly. Conversely, it may mean that on a heavier skinned animal than a rabbit, say a fox, it may not penetrate sufficiently at certain ranges. I have found that they are fine on foxes in reality, if bullet placement is correct. The wound channel was the third largest in size at 322ml, and as expected, the light, frangible V-MAX turned to shrapnel and I could only pick out 7.6-grains to weigh.

Second up was the 17-grain, CCI TNT, which at a velocity of 2657 fps penetrated a little further, at 4.5” inches, with a 310-ml wound channel. In real terms, not that different than the Hornady V-MAX, as the TNT too turned to shrapnel and only 7.2grains remained. But it had the highest velocity and energy figures, although it was also the least accurate in this rifle.

A nice surprise were the new lead-free offerings from Hornady, in the NTX, which uses a lighter bullet at 15.5-grains but actually did not have a velocity faster than the other bullets, as one might expect. At 2562 fps and generating 226 ft/lbs energy, it actually penetrated further than the V-Max and TNT bullet at 5.5” and then literally blew apart. A massive 496ml wound channel and bulged sides to the ballistic putty attested to the energy transfer and I could only find 5.8gr of bullet to weigh. It was also very accurate, nice load.

Finally, the 20-grain, CCI Game Point with the heaviest payload designed to penetrate deeper for fox-sized game. As one would expect, it was the slowest but still managed to produce 263 ft/lbs of energy, second highest. The extra momentum from the heavier jacketed soft tip bullet did indeed penetrate deeper at 6.75” and developed an enormous 592ml wound channel. The bullet had mushroomed perfectly to nearly twice its size and still retained 19.8-grains weight. Not only that, it was the most accurate at 0.65”, so a long-range, deep-penetrating load this one!

Any one of these loads will harvest vermin and it’s important that accuracy, although good in this CZ, may in other rifles be completely different. However, what will be the same is the terminal effects of each bullet type at the velocities stated. Both the Hornady V-MAX and CCI TNT 17-grains are fine for general vermin work and it will be down to cost of ammo and availability, which is probably the defining difference. The Hornady NTX 15.5gr was a really nice surprise, as I personally am not keen on lead-free bullets in my centrefire rifles but I have to say it was very accurate and gave a very impressive wound channel.

However, speaking to the Editor Pete Moore about the NTX, which he tested a few years ago, he reckoned on rabbits and hares he was getting a lot of shootthroughs with no expansion on chest shots, at close to medium ranges 50 to 120-yards. Animals ran to die up to 50-80 yards away, where they would have dropped on the spot with a V-MAX, Game Point or TNT. In his words: “accurate yes, but best for head shots!”

The CCI Game Points were superb both in energy generated, superb accuracy from the CZ and overall penetration and maximum wound channel results. You may say well why do I not just shoot theses and no other? These would be excellent for larger vermin but might over penetrate on a rabbit, whereas a more frangible bullet like the V-MAX or TNT turns to shrapnel and so reduces the risk of ricochets. I know that due to the demand for .17 HMR that some of the quality control has been a bit iffy, with split cases and even no powder, so try a few boxes and if you like it, then buy a quantity of that batch number for consistent results. The choice, they say, is up to you.