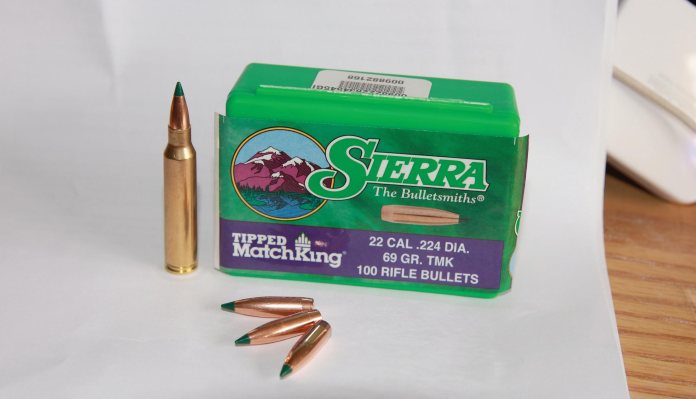 Sierra’s boat tail hollow point (BTHP) Match King bullets are one of the top choices when it comes to accuracy and performance. Though available in many calibres one that stands out is the .224” 69-grain, which is perhaps most associated with AR15 shooters. Designed for tight twist barrels 1-7 to 1-10” pitch they have become the benchmark.

Sierra has now added something we always thought was missing from their Match King range - a ballistic tipped option. Called the TMK (Tipped Match King) in .224” calibre the weight is 69-grains with a solid, boat tail base, long shank and ogive with a green, acetal resin tip. Compared to the older BTHP the tip is more consistent, feed improved and should be resistant to deformation in magazinefed rifles so offering a better down range ballistic coefficient (BC) and performance. We tested the TMK from a 20” SGC Speedmaster AR with a 1-8” twist H-Bar barrel running on 24.3-grains of Ram Shot TAC powder with a Remington small rifle match primer. When compared to the BTHP version the BC is much improved at 2700 fps the TMK offers a figure of 0.375 compared to the BTHP’s of 0.301. Sierra says it’s a Match bullet so in the UK will be classed as a non-expanding Section 1-type projectile so no special permission is need to buy them when compared to an expanding type.