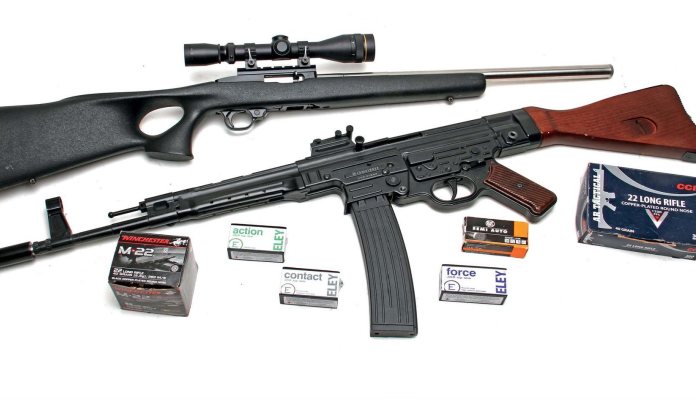 Many people find that some .22LR ammunition does not quite have the ‘oomph’ to cycle their semi-automatic rifles consistently. This is especially true when running .22LR subsonic loads through the rifle, although many sporting and custom part swaps can assist in this matter.

By far the easiest way is to use ammunition designed specifically for semi-auto use and I bought a selection to test for this article. Quite often reliability is increased with higher velocities but some want a quieter life, so some manufacturers instead have upped the bullet weight from the standard 40-grains to 42-grains, to achieve consistent results.

Both methods work and it is really down to your rifles choice to what it likes to digest for accurate results. It’s all well and good cycling OK, but accuracy is still an important issue too.

For the test, I got some of the new Winchester M22, RWS Semi-Auto, CCI AR Tactical as well as Eley’s Action, Force and Contact ammunition.

First up are the Winchester M22 cartridges, which have a standard 40-grain bullet weight but with the traditional round nosed design, now black copper plated. This is meant to help function and cycling in a semi-automatic and reduce the build-up of waxy/oily deposits associated with normal, lead .22 bullets. They come loose in boxes of 400 rounds, so obviously anticipating a high semi-auto round count!

The RWS Semi-Auto ammo has been around longer and established itself as a great round that’s both accurate and consistent in a wide range of rifles. It uses a heavier 42-grain bullet and produces higher velocities in bolt action rifles that sits on the sound barrier threshold, dependent on weather conditions. However, it is subsonic in semi-auto rifles. The bullet is less liberally coated in wax and has a solid rounded head for reliable feeding and function.

Boxed in cartons of 300 rounds, like the Winchester M22, the CCI AR Tactical is designed for high volume, reliable, semi-auto rifle use. Being able to achieve the advertised 1.5”, 10-shot groups at 100 yards, means they are good for practical rimfire challenges and provide fast, reliable cycling. The clean-burning powder provides consistent velocities as well as cleaner barrels, plus less gunk deposits in the action. The copper-plated bullet is designed to reliably feed in high volume scenarios.

The next three rounds are from Eley and they have really thought about the issues related to .22 rimfire projectiles and semi-automatic fire. Eley’s performance is made possible by innovations in bullet profile and brass case design, where the new bullet profile eases the loading of each round into the chamber for an improved cycling rate, even at speed. Also, the case and rim design have been optimised to deliver consistent reliability in a wide range of competition firearms, where a wider tolerance of headspace can cause misfires or light strikes.

First is the Contact 22LR. Eley specifically developed this as a subsonic round to work better in semi-automatic rifles. Although intended for competition shooting as the bullet has a solid lead projectile, it still has applications for reliable semi-automatic sporting rifles, headshots only with a safe backdrop. The bullet is heavier at 42-grains for a higher energy transfer on inertia semi-auto actions and the bullet lube is paraffin wax, to avoid build-up in semi-auto mechanisms/magazines. The Eley Force on the other hand is a high-velocity, semiautomatic .22LR round. Again 42-grains, designed for power utilising a new propellant so the pressure curve accelerates the bullet to a supersonic velocity. Both are good for a reliable feeding action and better knockdown power too.

Finally, there’s the Eley Action rimfire, which was launched to bring greater levels of performance, reliability and precision to the UK’s practical shooters. It uses a 42-grain bullet with a subsonic velocity for reduced recoil, so the shooter has a faster target re-acquisition time.

With any semi-automatic round, a certain amount of velocity is lost with the inertia operating system sapping precious gas pressure build-up and energy to cycle the action. Every rifle can shoot differently and especially a semi-automatic, as its reliability and function are greatly affected by how clean it is. The better functioning and reliability are not only velocity related as the bullet coating, necessary on a lead bullet, can also affect the reliable function in a rifle’s action.

First of all, reliability is top of the agenda here as there is no point in having an accurate round that won’t feed 100% and verse versa. As you would expect, the 10/22, which admittedly has had many thousands of rounds through it, is nicely run-in with a bog-standard action, except for a fully suppressed PES barrel. The GSG MP44 on the other hand is quite fickle in its diet preferences, and that can change from day to day sometimes! Mainly down to magazine problems in truth.

Regardless, all the rounds tested in the Ruger (even the slow Eley Action at 935 FPS), cycled without a hitch. In fact, the only problems I had were from the Eley Force, which tended to stack pole in the action (jamming before they entered the chamber). This was only 5 or 6 times out of 100, but still annoying.

The MP44 was a different kettle of fish. It would sometimes shoot half a magazine of Eley’s Action, then refuse to cycle them. While the Contacts and RWS ammo functioned really well, with just the odd stoppage, again stack polling.

Accuracy wise, there were no surprises. The RWS and Eley had the best groups at both ranges, but remember the MP44 is only open sighted (See Ammo Tables). The 10/22 really liked the RWS Semi-Auto and Eley Action rounds as well as the Eley Contact too, with 0.65, 0.75 and 0.75” 30-yard groups respectively. Even at 50 yards, they were below 1.0”. The higher velocity Win M22, CCI AR Tactical and Eley Force rounds in the Ruger produced subinch groups at 30 yards, but were obviously much noisier to shoot.

The MP44 is a bit of a fun gun really but still at 30 yards, despite its open sights, it still achieved 1 to 1.25” groups. At 50 yards it was harder to shoot accurately but is still a really good plinking rifle.

Also, the lighter bulleted Win M22 and CCI AR Tactical at 40.4 and 40.2-grains respectively, despite their higher velocity were the ones that did not quite cycle the action all the time. Although the dry lubed, Black copper-coated Win M22 rounds did seem to leave a lot less crud up the barrel after inspection. The cleaner-burning powder in all the Eley rounds meant that there was less unburnt powder residue as well as less obvious sticky wax and crud build up around the bolt face and action.

I was actually impressed with most of the ammunition tested. I prefer the subsonic varieties, despite them not being made for sporting use, as noise is kept to a minimum with a suppressor fitted when you are shooting multiple rounds in one session. On the range or practical shooting, when noise is less of an issue, then it’s really what your rifle likes to shoot accurately. They were all really reliable compared to most non-semi-auto specific 22LR ammunition. Personally, I really liked the RWS Semi-Auto and the Eley Action or Contact rounds, due to their combination of accuracy, reliability and low noise.