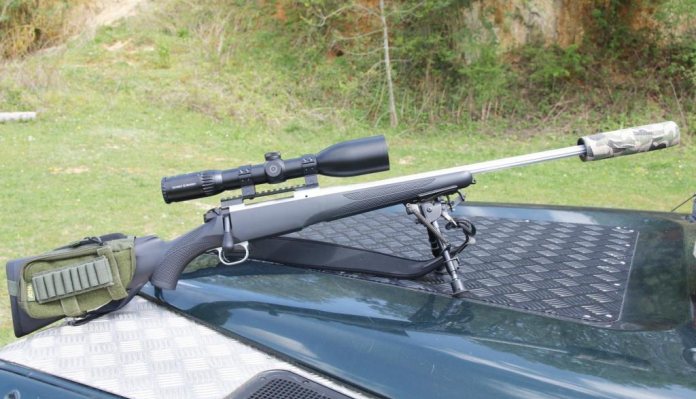 Checking through my gun safes, I note that I have three 6.5mm calibre rifles; a 6.5x55mm (Swedish) Mauser M03, 6.5 Grendel semi-custom CZ527 and my latest .260”, a 6.5 Creedmoor again semi-custom built on a Weatherby Vanguard action. The Grendel stands alone as a light and compact intermediate calibre that punches well above its weight for what it is. But the focus of this article is the Swede, as it’s without doubt the most popular Metric cartridge in the UK and has been so for a long time now.

Why? Well, it does not throw big, heavy bullets at high speed, but what it does is offer one of the truly magical bore sizes, bullets have superior ballistic coefficients (BCs), good cross-sectional area and are long and penetrate and perform exceptionally well. Suffice to say, the Swedes allow it for moose and they aren’t a small animal. Equally, I’ve shot large reds in the UK with Winchester’s 140-grain soft point load, doing around 2450 fps/1875 ft/lbs; like I said, it’s not that quick, but it works! In Europe, it’s equally respected as a match calibre, as it shoots!

In 1980, Remington introduced their 7mm-08, which was in essence a US version of the old 7x57mm Mauser, but in a short-action format and it went down well in the States. In 1997, they offered their second Metric, the 260 Remington, which again was an Imperial version of the 6.5x55mm Swedish. Both calibres based on a necked-down 308 Win case. Though recognised and used by those in the know as efficient designs, they never really had a massive following in the UK.

With some British shooters appreciating the 260 Rem at both target and hunting levels and others with 6.5 Swedes for deer, the world ticked on. But, in 2005, Lapua started a mini ammo race with the introduction of their 6.5x47mm Lapua; primarily a match round, but very soon picked up by hunters and varminters alike. This, I think, also re-kindled interested in the 260 and the Swede; especially with the number of rifles offered in these two calibres!

In 2008, the world really woke up to 6.5mm, with Hornady’s introduction of the 6.5 Creedmoor. Originally envisaged as a versatile, cross course Match cartridge, it soon gained favour as a hunting round too. Again, and essentially a 308 necked down to 6.5, it showed a more Ackley-like shoulder and with the advances in bullets and rifles, offered massive potential. So much so, and though there have been many articles on what’s better, 260 Rem 6.5 Lapua, 6.5 Swede or Creedmoor, it seems to me that the Hornady’s progeny has proven to be the front runner. So much so, there’s now a 6mm version, doubtless to go head-to-head with Norma’s 6xc, but that’s another article!

What’s in a name?

I’m aware that the cartridge case design can affect performance, as does correct reloading drills; truth is, with the proper rifling twist for bullet weight and design, a 6.5mm barrel is a 6.5mm barrel. I proved this with my Mauser M03 in 6.5x55, when shot against a Remy 700 Gen II with 5R rifling in 6.5 Creedmoor, using Hornady 6.5mm, 143-grain VLD X bullets. With both rifles shooting near calibre-sized groups at 100m and keeping it tight much further out and retaining energy well too. So, with this rather long preamble behind us, I ask, what’s wrong with the 6.5 Swedish?

For the laymen, I think four factors do weigh against it. Firstly, it’s old; entering service in 1894, though still popular today. And as stupid as it may seem, many people feel it’s not worth the effort for that reason alone; ridiculous! Second, it’s a long action calibre that perhaps does not need to be, when you look at the 260 Rem, Lapua and Creedmoor. Third, the original Mauser 1896 action is not as strong as the later M98, so giving the calibre an undeserved reputation for lack of power. Truth is, and as I have proven with my M03, which is a strong, modern design you can make the Swede perform far better and safely than the original spec would have you beleive. Given you select the right bullet and weight, then think 25-06 Rem or even 270 Win-type performance! Fourth and finally, it’s seen by many as primarily a deer cartridge; in truth, its performance and versatility is equal to the three more modern 6.5s!

To be honest, I’m not concerned with the more accepted bullet weights used by the Swede in the medium (140-grain) and heavy (155/6-grain) offerings, with perhaps the exception of Hornady’s new ELD X 143-grain ballistic tip; which, in a world of ammunition that make big claims and often returns mediocre results, is truly exceptional and is now my go-to reloading bullet for all deer species. The 140-grain loads seem to be the most popular in the usual choices of ballistic tip, pointed and round-noses soft tip etc. The 155/6-grainers are slower and lose energy faster but still slam dunk the deer, saying that, in a strong modern rifle like my M03, I can run Lapua’s 155-grain Mega (round nose/soft point) with my reloads at an average of 2612 fps/2444 ft/ lbs, which will ace most factory loads. Experimentation has shown that the best I can get out of this one, using Vit N560 powder, is a stonking 2758 fps/2633 ft/lbs with no pressure signs. So, we can take that to the bank in terms of hunting bigger species.

It’s the lighter bullets that interest me more, as they can turn the seemingly pedestrian 6.5x55 into a fast and flat shooting platform for varminting, foxes and small deer use, which is what I want to explore with this series of articles.

I like longer barrels on my hunting rifles, as that extra two to four inches means more speed, energy and accuracy potential. My 6.5 M03 barrel is the old 23.5” length and looking at their website shows they do not do it anymore, which is going to be a sad day when I wear it out. Plus, the modern thinking seems to be for shorter tubes at 22”; so, with that in mind, I decided to stick with the brand but go for something that represents an affordable and more up to date product, the Mauser M12 Impact.

The Impact is an outgrowth of the standard M12, in that it has a medium weight, 22” fluted barrel, which strikes a nice balance between handling and ability. It uses the synthetic, Extreme stock, which is top choice for an outdoor gun and is a conventional, fixed barrel design, without a de-cocker or need for QD scope mounts. It also comes threaded and with a one-piece, Barton Gunworks 20MOA rail, all for the princely sum of £1220, which compares well to the ball park of £2700 of an M03 Extreme!

The barrel is a 1-8” twist, pretty much what’s required for a 6.5mm and shows a slight and gradual taper from its short reinforce from 19.72 to 17.28mm and ends in a 15mm thread at the muzzle with protector. Both this and the action show a tough, silver, Ilfalon finish. Like the M03, there’s a massive ejection port! The long bolt handle shows a synthetic teardrop knob and gives a low, 60° lift angle. The shroudmounted safety uses a 3-position lever; forward FIRE, middle SAFE with bolt operation and rear SAFE with locked action. It’s easily operable by the firing hand thumb, without having to break the rest of your grip. At the rear of the shroud is a cocked action indicator pin with red ring that can be seen in the day and felt in low light. Feed is from a 5-round, polymer, detachable box mag, which can also be top-loaded, the release button is at the front of the well and recessed and operated easily. The trigger guard can easily accept a gloved finger!

The pleasingly solid, one-piece stock is dark grey with moulded-in gripping sections at pistol grip and forend, length of pull (LOP) with the slim rubber butt pad goes to 14.5”. The forend is reasonably rigid and offers a light free-float to the barrel, Three QD sling studs are fitted, two fore and aft and another in the tip, so no problem using a bipod. Visually, the Impact is a pleasing looking rifle, if a bit bright, and feels and handles nicely being neither too light, heavy or long.

For the testing, I added a Harris BRS bipod, Barton Gunworks reflex moderator and a Schmidt & Bender Polar 4-16x56 (34mm tubed scope) in Sportsmatch 34mm rings. Factory ammo consisted of RWS 140-grain (twin-core) Cone Point, Norma 140-grain Nosler Partition and Geco 155-grain SP, just to get a bench mark for accuracy potential. Next time I will be seeing what the 140/155-grain ammo can do and starting to consider the lighter bullets for the reloading stage.