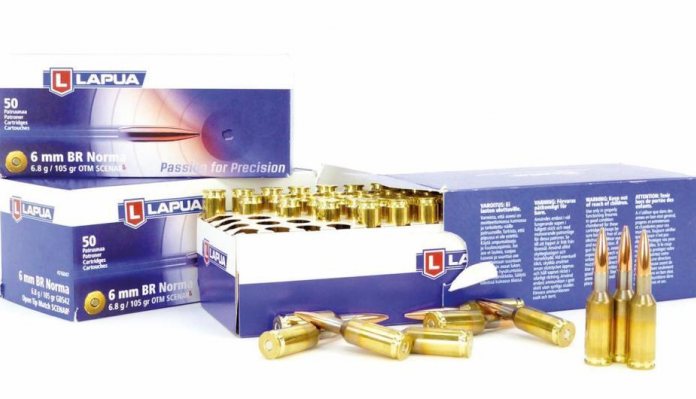 The term BR hardly needs an introduction but for anyone in doubt, we mean benchrest (BR)! The club for those seeking a one hole group at awesome distances. Over the last half century or so, this fanatical desire for ultimate performance has inevitably been the seed for a legion of wildcat cartridge designs. Many have been based upon the ubiquitous .308 Winchester case, including our subjects for this month, the 6mm BR Remington and its practical successor, the 6mm Norma BR.

An early 1960s, wildcat development of the .308 Win was the short action .308 x 1.5” pocket rocket from Frank C Barnes (he of ‘Cartridges of the World’ fame). Whilst that has since morphed into the extremely popular benchrest score cartridge, the .30 BR, the Barnes creation also opened the .308-based wildcat floodgates in other calibres, of which 5.56 and 6mm were most common.

It was in 1978 that Remington launched their 40-X rifle, chambered for wildcatters using 6mm BR. With a plethora of wildcat 6mm designs in circulation, it was something of a dimensional chamber gamble.

Remington resolved this by naming their chambering as 6mm BR Remington. A decade later, Remington released a heavy, 2500 fps 100-grain cartridge for use in the rifle and in anticipation of the release of their XP-100 pistol in that calibre. Their case length was some .040” longer than a number of the earlier wildcat iterations, causing some chambering issues. The potentially flat shooting cartridge proved versatile in the hands of reloaders, for both BR and small varmint applications, but generally with lighter bullets ranging from 60 to 87-grains and with velocities in the region of 3000 fps. However, obsolescence was around the corner, as a new generation of VLD bullets (very low drag) designs took performance to another level.

The new commercial take on the 6mm BR appeared in 1996, when Norma entered the market with their 6mm Norma BR – listed with CIP as an all new cartridge! Using the same size small rifle primed case as the Remington, they extended the book COL from 1.200” to 1.441”, in order to accommodate their longer 90 and 105-grain Lapua Scenar VLD pills. With velocities of 3000+ and 2800 fps respectively, they have established many record performances.

Here in the UK, the emphasis will be on BR, rather than varmint shooting, if only because of the cost/reward implications! And for larger game, there are a wide range of better calibres. As a .243”, the choice of both brands, designs and weights of bullet is extensive. Whilst Remington headstamped brass has become almost collectable, un-primed new Norma and Lapua cases are currently listed. Data is not present in all current manuals but does exist. Tools are no problem; suitable BR dies just being one 6mm/.243 calibre amongst almost 100 on the Midway web site! Powder and primer choices are not an issue. Assembly is straightforward, providing that you are aware of the chamber/throat dimensions of your rifle! If you need to shop for a rifle, then Cooper, Savage, Remington, Tikka, Sako and indeed, almost all the well-known makes will have something to offer. Ammo manufacturers and custom shops have something to offer, as to the application, the One Hole Grail of course!