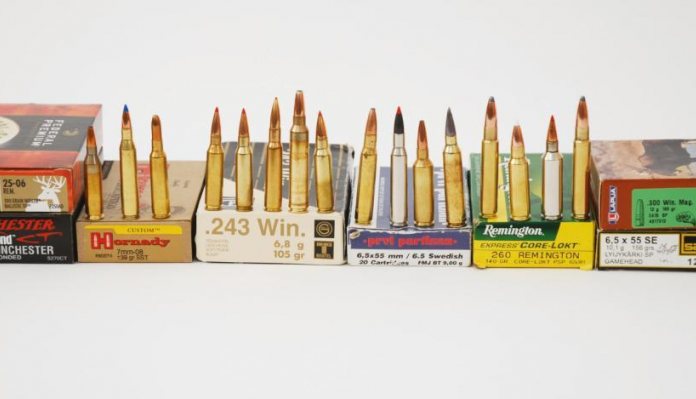 Before the successful development of centrefire priming in the mid-19th Century, the majority of calibres, large and small, were rimfires. The old .56-inch Spencer and the .44 Henry are two examples, along with of course, the .22. However, that all changed before the turn of the 20th Century, though some were still in production well into the 1920s. In the 20th and 21st centuries, we have seen resurgence of development but only in the small bore calibres like .17-inch. Though Remington did introduce their 5mm Remington Rimfire Magnum (RRM) in 1969, which used a 22 Magnum case necked down to fire 30- and 35-grain bullets. The newer 17HMR is a similar concept. Technically, the 5mm RRM was probably a better design than either but it was discontinued in 1982. There are some rumours that a new .20- inch rimfire is being considered!

Another also ran is Hornady’s 17 Mach 2 (HM2). Using the same 17-grain BT as the HMR but in a necked down 22LR case. It pushes it at 2000fps/170ft/lbs and like the HMR is accurate but is very badly wind-affected and performance drops off quickly too. Rimfires use a balloonheaded case. Here, the rim is hollow, with the priming compound spun into it. The case headspaces on the rim and the firing pin hits this and not the centre to fire it, once fired it cannot be reloaded, though I have met people who have tried…

Without doubt, the 22 Long Rifle (22LR) is by far the most popular rimfire calibre today and equally applicable for target or hunting use. For example, you can get low (sub-sonic), standard, high and ultra-high velocity in both Section 1 and 5 loadings. The most popular hunting loading is the 22LR subsonic, firing a nominal 40-grain HP bullet around 1000 fps/90 ft/lbs from a moderated rifle. Winchester recently introduced a 42-grain load, which is as quiet but carries a bit more energy. However, there are other, earlier designs, which have fallen by the wayside, such as 22 BB Cap, 22 Short and 22 Long.

Moving up the power ladder, we have the 22 Winchester Magnum Rimfire (22 WMR) introduced in 1960. This longer case offered speeds of up to 2300fps/320ft/lbs with light 30-grain bullets and up to 1900fps/324ft/lbs with the standard 40-grain load. This aces even the ultra velocity 22LR by a minimum of 500fps, with commensurate increase in muzzle energy, an average of 700ft/lbs. Bullets are jacketed to withstand the higher speeds and normally HP, SP or BTs but solids also exist. For the rimfire hunter, the 22WMR increases effective range and performance by 50-yards + over the 100-yards of the 22 LR.

Radical is Hornady’s 17HMR (Hornady Magnum Rimfire). Introduced in 2002 it simply necked down the 22WMR case to .17-inches, firing either a 17-grain BT or a 20-grain HP; both jacketed. Though both are still in production, the 17-grainer is top choice, pushing this tiny pill around 2500fps/245ft/lbs, the 20 is producing 2350fps/250ft/lbs. I think it hit the UK in 2003 and has risen in popularity to knock the 22WMR off the top spot. Though it has less energy, it shoots flatter, is highly accurate and 200-yard capable.

However, it does not stop with the HMR; as even as I write this, I have just received the latest and hottest rimfire, Winchester’s 17WSM (Winchester Super Magnum). The WSM is not based on a rifle calibre as 17HMR is to 22WMR but uses a nail gun blank cartridge, necked down to .17. There are two loadings 20- and 25-grains in either BT or HP all jacketed. The 20 is doing 3000fps/390ft/lbs and the 25 is 2600fps/375ft/ lbs. How it’s received in the UK remains to be seen!

There are too many Centrefire calibres to go through in detail, as I have with the Rimfires, but I will pick the most relevant to the British shooter. Once again the law must be looked at, as it concerns hunting large game as to bullet effectiveness. You may not use any form of non-expanding bullet, including Match BTs and HPs, on any UK deer species. Deer are in two classes; small – Muntjac and Chinese Water Deer (CWD) and large – Roe, Fallow, Sika, Red and Sika/Red hybrids and more recently wild boar. So Section 5 HP, BT and SP are mandatory.

In England and Wales, small deer can be taken with any 22 Centrefire calibre, for example 223 Remington, with a minimum bullet weight of 50-grains and a muzzle energy of 1000ft/lbs. Large species requires a minimum calibre of 6mm and 1700ft/lbs. In both cases, Scotland differs slightly as to bullet weight, velocity and energy figures; they also allow 22 centrefires for Roe.

To be honest, your average British hunter or target shooter can do it all with just two or three calibres – 223 Remington and 308 Winchester. Both are highly accurate and also cover the small/large deer requirements and any form of competition shooting.

The 223 Rem is available in a wide range of bullet weights and types, from ultra-high velocity 36-grain varmint loads up to the classic 55-grain FMJ and BT and beyond with 69 and 77-grain Match rounds, giving this calibre some longer range legs. 308, it’s one of the top choices for most forms of competitive shooting, with 168-grain A-MAX or BTHPs and heavier being great target choices. Equally so, a 150-grain and heavier Section 5 bullet can take any species in the UK or Europe, including big wild boar and is good enough for most African plains game.

Saying that, the 243 Win is the most prolific choice for both deer and foxing, with bullets from 55-graisn for flat and fast up to 100/105-grains for larger species and with the right rifling twist and barrel length the 105- and 107-grains Match loads can really shoot!

Since the handgun ban, pistol calibres have taken a bit of a back seat. Top choices here for classic lever-actions are 38 Special and 357 Magnum; essentially the same round with the latter being longer to hold more powder. Accurate and with more range potential than you might think, they represent a cost-effective option. 44 Magnum is perhaps better for long range Gallery Rifle but wasted at normal distances. 9mm Parabellum and 45 ACP can be encountered in PR Rifles like Southern Gun Co’s LR series and Armalon’s PC Rifles. SGC also offers a 30 Carbine chambering in their lever-action (LR30) and straight-pull Speedmaster.

I shoot a 223 Rem but do not own a 308. Instead I have opted for a 270 Win for most of my hunting needs in the UK and a 30-06 for overseas work. My view is simple; the 06 gives me just that bit more speed/ energy/range potential and is good insurance on big boar and larger African plains game. It’s also accurate, so will serve in the target role too. There is now also a lot of interest in the old 300 Whisper/300 AAC Blackout. Using a 223 case necked up to .308 with heavy 200-grain + bullets, they offer a true sub-sonic round in a moderated rifle. Loaded with lighter 110-grain pills they offer an interesting alternative to the 223 Rem for short-range hunting and even competition.

However, if you like to tailor your calibre/rifle to your needs, there are many good, if less mainstream choices out there. The old 6.5x55mm Swedish is ridiculously accurate, and though slower than 308, is a great deer and moose cartridge. Equally so 260 and 7mm-08 Remington, that are US versions of the 6.5 Swede and the German 7x57mm. The 270 Win and 30-06 have been covered, but moving up on power we comes to the Winchester Short Magnums (WSMs) in 270, 7mm and 300. Two other good magnums are without doubt the 7mm Rem Mag and the 300 Winchester Magnum; the latter being the most popular. Also a great choice for larger species on any continent and long range.

Over the last 10/15-years there has been a great deal of cartridge development. 6.5 Grendel and 6.8 Rem SPC are two intermediate calibres originally designed to use the M16 platform, but have become popular for sports shooting. Equally so, the 6.5 Creedmoor and 6.5x47mm Lapua, based around the 260 Rem concept, they have become popular for both target and hunting work. The 6.5 x 284 is favoured by F-Class as well as the 7mm WSM, the 338 Lapua Magnum is rated as one of the better long-range designs.

I’ll end with two great and older designs. The 45-70 Government goes back to 1874 and was originally a US military calibre and is still popular today for both classic competition and close range hunting on larger species. Quintessentially British is the 375 Holland & Holland Magnum, which is one of the grand African calibres. Entry level for Elephant and similar, it’s a good choice for buffalo or the big antelopes like Eland if you want to keep it traditional!