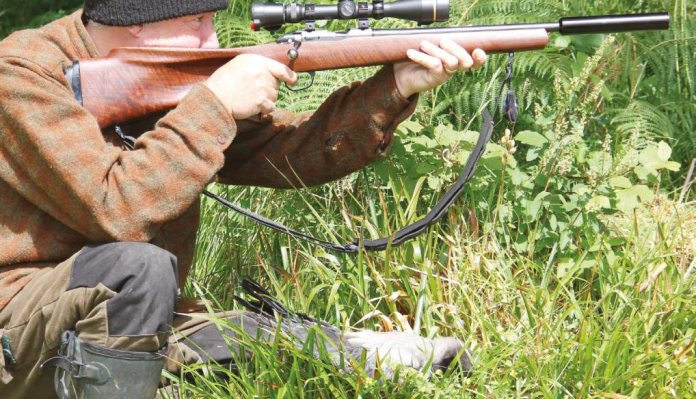 The humble .22 rimfire has been the mainstay for vermin control and today the top choice seems to be the sub-sonic (subs) version, primarily designed for use in a moderated bolt action rifle. If you shoot them in a semi-automatic, you can get reliability problems. Today, manufactures make subs for semi-autos, so I thought a comparison between them and the standard fodder would be useful.

This is a hollow point load and designed to have a shorter penetration and better bullet expansion to deliver a good stopping power compared to standard velocity. The bullet is lubricated with a non- greasy lube to help in a smooth function in your rifle.

The Contact as a subsonic specifically to work better in semi autos for more reliability. Although intended for competition shooting, as it’s a round nose, but it still has applications for reliability in sporting rifles. The bullet is heaver, at 42 grains, for a higher energy transfer and lubed with paraffin wax to avoid build up in the mechanism and magazines.

This 40-grain load has a deep hollow point bullet design for fast expansion and energy transfer and a heavy wax coating, which, combined to the slower velocity, makes it not suitable for semi-autos.

Specifically designed for semi auto rifles for reliability and consistent performance, it uses a heavier 42-grain bullet and higher velocity that sits on the sound barrier threshold and is lightly wax-coated for a reliable feeding and function.

This is the mainstay of vermin shooters with a deep 40-grain hollow point, designed to expand quickly and penetrate less to deliver the energy on target. It has a long truncated profile and wax lubrication with good accuracy.

The newer 42-grain Max features a Power-Point truncated nose hollow point bullet. It produces better expansion compared to other rimfires; so, terminal performance is enhanced even at sub-sonic velocities and functions better in semiautomatic rifles too.

I used a Sako Finnfire bolt-action and a Browning SA semi-auto for the accuracy tests, The Sako is very accurate and would show any differences between ammo types. The Browning is accurate too but can be fussy; so, a good test to see if the semi ammo was better in terms accuracy and reliability. As it happens, I also shot the ‘semi’ through a Ruger 10/22 and Remington Speedmaster too, to test reliability.

First up, were the Eley Subs and Contact. In the Sako, the Subs were consistent at 1021 fps and 93 ft/lbs with all shots were subsonic. However, the Contacts velocity rose to 1087 fps for 108 ft/lbs and in the 10° temperatures, so a couple of those shots made a supersonic crack.

Lastly, the Winchester 40-grain Subs and 42-grain Max shot 1012 fps/91 ft/lbs and 1054 fps/104 ft/lbs respectively in the Sako. Through the Browning, the Subs shot 1011 fps/89 ft/lbs with three malfunctions in 50-rounds, the Max ammo shot 1041 fps/102 ft/lbs with no problems. The better functioning and reliability is not only velocity-related, as the necessary bullet coating can also affect the reliable functionality.

So, what about accuracy? As expected, the Sako’s groups were smaller than the Browning’s, but look how the group sizes shrink with the heavier and semi auto-friendly ammunition. Eley Subs V Contacts in the Sako shrunk 4% in group size so pretty much the same, but in the Browning, there was a 16% increase, so not a good start.

The RWS subs against the Semis fared better. In the Sako, there was an amazing 51.6% reduction in group size! Being a bolt-action, the group size shows that certain rifles just like different ammunition. In the Browning, reduction was equally good but with the Semis this time, 46% in fact with no malfunctions so a perfect choice for any semi auto.

The Winchester 40-grain Subs and 42-grain Max in the Sako actually gave a 14% increase in group size, whilst in the Browning a very good 34% reduction. This had a couple of light strikes, as the excessive wax coating on the Max did not quite chamber properly. It also shot the smallest group sizes in the Browning at 0.442”

On target performance, energy transfer, penetration and expansion are also very important. All three standard sub-sonic loads are hollow points, so designed to expand. However, the semi-auto ammunition in the Eley Contact and RWS Semi has a round head design, for better feeding in a repeater action. Only the Winchester 42-grain Max was a hollow point. I shot each into 9” ballistic media blocks, to assess performance.

The Eley Subs, as predicted, expanded well to 0.25” with the head separated to the side, but total weight retention too and penetrated to 6.5”. The wound channel volume was good at 32.5mls with a distinct initial expansion cavity 1”. The faster Eley Contact with its round solid bullet achieved total penetration, with little expansion of 0.224” and a smaller 24ml wound channel volume due to it not expanding and dumping its energy inside the test media.

The RWS Subs were next and penetrated to 6.25”, almost the same as the Eleys with a bullet expansion of 0.360”, which was excellent, as it held together and mushroomed perfectly. Wound channel was also good at 36ml volume, so decent energy transfer inside the media. Conversely, the Semi passed straight through the block, with little expansion of 0.226” and smaller wound channel of 27ml because of this.

The Winchesters both have a deep and wide hollow point bullet and they did not disappoint. The 40-grain Subs penetrated 7.25”, due to slightly higher velocity than comparable Eley and RWS Subs and the bullet expanded to 0.296” with the head separated. The wound channel was equally good at 34 mls. Best of all, where the 42-grain Max, which lived up to their name, with combined deep penetration of 8.25” and good expansion of 0.271” with head separation. But look at the wound channel volume, 66 mls! Nearly double the standard sub sonics tested. That extra bullet mass made a big difference, delivering a big kinetic energy dump into the test media; in fact, it rocked when hit in the tests.

Firstly, with all rimfire ammunition a safe backdrop is essential, as even the slower sub-sonics will over penetrates a rabbit’s head, so ricochets are a real problem, especially so with those round nosed ammunition tested. However, with the better reliable feeding of the Eley Contact and RWS Semi ammunition a head shot is still viable. Best ammo tested by far were Winchester’s 42-grain Max, great accuracy, reliable functioning in a repeating rifle and superb bullet performance. Remember though, every rifle is different, how old and clean makes a big difference but .22 LR ammunition is cheap, so try a box of each and choose what works in your rifle.