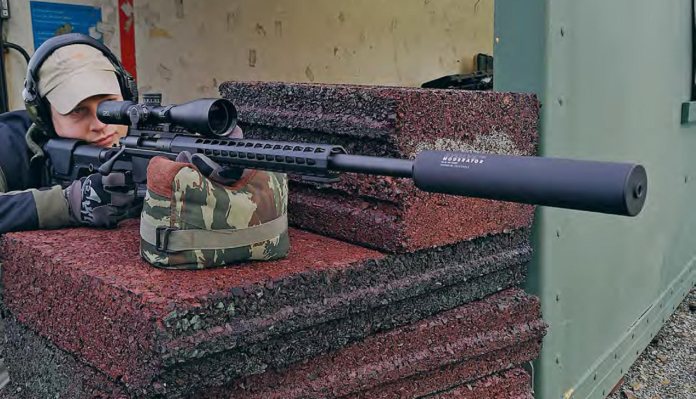 Remington Arms has been manufacturing ammunition since 1816. They are one of America’s ‘favourite’ brands of ammunition, and in a market that will only accept the highest quality products and service, and after being in the business for so long, they are obviously doing it right.

Established in 1965, Viking Arms has grown to be one of the biggest distributors of shooting sports equipment and supplies in the UK, and they now carry some of the best and most respected brands in the market, including Ruger, Merkel, Leupold and Mossberg. More recently, Viking Arms added Remington ammunition to its portfolio. The ‘Big Green’ brand represents a welcomed addition to the variety of factory ammunition that is available in the UK, and with eight types of ammo initially available, Viking will be expanding their range of Remington ammunition over the coming months.

The Core-Lokt bullet has been around for over 80 years and has proven to be one of the most effective, longstanding and successful bullets available for game that you can get. New for 2022, the ‘Core-Lokt Tipped’ bullet offers the same proven on-game performance of the original bullet, with improved accuracy and long range performance. The green polymer tip significantly improves long range ballistics and accuracy, plus also initiates a very rapid expansion on contact with the target. It appears that even the Core-Lokt bullet can be improved on!

Available in boxes of 20 rounds, this ammo is already a huge hit in America and there are countless positive reviews of it online.

Designed to expand very quickly and effectively, Remington describes the effect on impact of the AccuTip-V bullet as ‘explosive’, with the thin jacket and soft lead core being instantly fragmented by the polymer tip. In .223, the 50-grain bullet exits the barrel at 3410fps and at 100 yards delivers 992 ft/lbs of energy. The .22-250 ammunition also carries the 50-grain bullet but produces a muzzle velocity of 3800fps and at 100 yards, 1238 ft/lbs of energy. The ‘V’ is for Varmint and with impressive figures like these, they are both an ideal round for foxes.

The 300 AAC calibre was developed to yield enhanced performance in shorterbarrelled guns and improved results when fired through suppressors. Aimed at the target shooter here in the UK, this ammunition carries a 220-grain, open-tipped, flat base bullet with a muzzle velocity of 940fps. At 100 yards it has 411 ft/lbs of energy. Remington quality at a more affordable price allows you to use this ammunition in competition without worrying about excessive cost.

Definitely one for the target shooter, this 300-round bucket of ammunition should be more than enough for a day at the range The 55-grain Full Metal Jacket (FMJ) bullet has a muzzle velocity of 3240fps, with 929 ft/lbs of energy at 100 yards. With this bucket, you are buying in bulk from a single batch (if your FAC allows), which ensures you are guaranteed consistency across the full 300 shots.

Bulk value buckets like this are very common in America and it is good to see them here in the UK so that the competition shooter has a source of well-priced ammunition from a single production run.

Remington offers a large range of Magnum Rimfire ammunition. It has a reputation for providing shot-to-shot consistency, a very flat trajectory and extremely effective terminal performance. In .22 Winchester Magnum Rimfire (WMR), the 40-grain Pointed Soft Point (PSP) bullet is travelling at 1910fps at the muzzle, and at 50 yards, the muzzle energy is a very impressive 228 ft/lbs. At approximately 150-yards, the bullet drop is just under 9”, which is particularly flat-shooting. The PSP bullets in these high-velocity rounds show very effective terminal performance, and the ‘explosive expansion’ ensures pests are dispatched cleanly every time. At around £20.00 for 50-rounds, this is a good price for any Magnum Rimfire ammunition at the moment, so it is well worth a try.

The AccuTip bullet was actually designed and developed for centrefire cartridges but has been scaled down into a 17-grain bullet for this Rimfire Magnum round. The tiny polymer tip provides match-level accuracy, improved ballistic performance and rapid expansion on impact. The muzzle velocity is an impressive 2550fps, and at 50 yards the bullet retains 185 ft/lbs of energy. The trajectory is extremely flat, with bullet drop being just 3” at 150 yards. This is a great round for vermin control and the highly engineered AccuTip bullet in such a small calibre is a very impressive and effective piece of engineering. Also priced very competitively, for a calibre that does tend to be expensive, this is .17HMR ammunition that is likely to prove very popular.

The Remington brand has stood the test of time by constantly manufacturing highquality and reliable ammunition, and now that Viking Arms is bringing these products to the UK, we have the opportunity to give them a try. We look forward to testing some of them, so watch out for reviews coming soon.