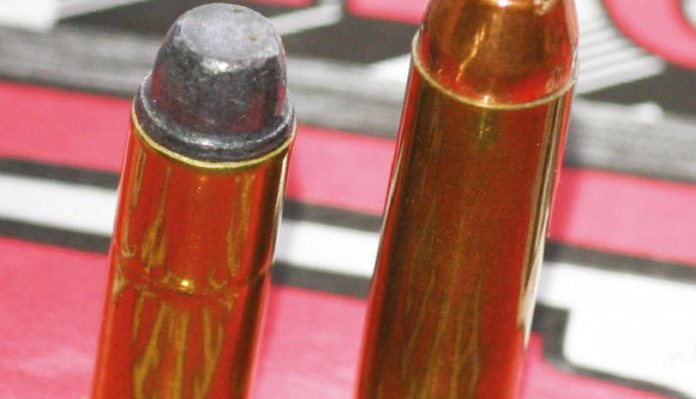 A grovelling apology to those of you expecting to read about the .260 Remington. Mea Culpa. It should appear in a couple of months. Instead, we continue our look at stretched handgun cartridges. Regular readers will know of my enthusiasm for the supremely accurate .357 Remington Maximum, the production version of Elgin Gates’ wildcat .357 SuperMag. Well, let’s look at another of his ideas, the .445 SuperMag. As the name implies, it is based around the .44 Magnum and was one of Gates’ last designs prior to his untimely death in 1988. The increased material taking the case length from 1.285” to a capacious 1.610”. This length being the default for all his SuperMag family; a dimension that took account of the practical limitations of existing revolver cylinder and frame lengths.

The .445 was primarily intended for use in long range, high energy, target applications such as IHMSA (International Metal Handgun Silhouette Association). The design was originally based around bullet weights of 240-grains + with the Hornady #4300 265-grain FN and Sierra #8630 300-grain JSP leading the charge. Both performed best when driven with either H110, the WW680 (a superb ball powder now obsolete) or my favourite, H4227. The lighter pill achieved velocities exceeding 1450 fps, whilst the 300-grainer could deliver a ram hammering 1400+ fps. The downside was the old enemy, recoil. Ergo, the shooter took something of a hammering too. And unlike the ‘last resort’ single shot to drop a belligerent grizzly, the .445 SuperMag user had four rows of steelwork to fell, some 40 wrist breaking shots in all.

Unlike the 357 Remy Maximum, the .445 Gates SuperMag never found its’ way into commercial production. However, brass was, and is produced by Star-line, under the headstamp .445 Gates. Whilst custom chamberings have appeared in both rifles and revolvers, the only manufacturers to offer the calibre as a catalogue chambering were Thompson Center and Dan Wesson (DW). It was listed by the latter from the late 1980’s until their first Chapter 11 (bankruptcy) at the end of that decade. Thereafter, under various new managements, revolver production became somewhat inconsistent in terms of both calibres and quality. Claims that United Sporting Arms produced a stainless Seville revolver in this calibre cannot be confirmed, although they did list some of Gates’ other creations.

The absence of factory ammo makes this a reloading-only calibre. Data is quoted in Frank Barnes’ Cartridges of the World, as well as the current Hornady manual. Bullet choice is based around the .429/.430” ‘44’ cal designs, but care should be taken to avoid the use of copper-washed or thin jacket construction, as the possibility of stripping or separation looms large! Propellants and primers are no problem, although the choice of Large Pistol Magnum may need consideration and trial. The lively Federal 155 is widely recommended.

Whilst custom .455 Super Magnum dies have been listed by Redding and Huntingdon, they are plain steel, necessitating the use of case lube. Their advantage is the avoidance of a slight swell ring at the base of the case that can sometimes be caused by the sharp shoulder of a carbide insert. The alternative is a custom RCBS .44 Schafer UltraMag sizing die that puts a slight taper on the case but therefore also requires the use of lube. Most .44 Rem Mag carbide die sets will also accommodate the stretched .445. UK use might get under the Section 7 radar as suitably chambered Dan Wesson revolvers are both rare, obsolete and of great technical interest. There is no realistic possibility that the ‘new’ DW’s under CZ-USA ownership will ever now recreate these amazing revolvers!