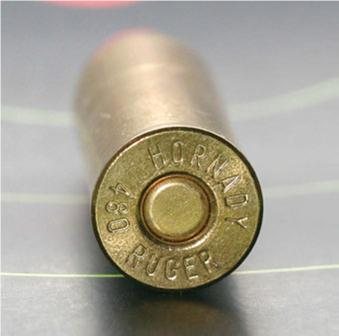 Fans of big bore revolvers are likely to have encountered the novel arms and wildcat ammo output from John W Linebaugh of Cody, Wyoming. And no, he’s not the focus of this month’s rant, just the man who started it! His 1986 creation, the only one to have briefly enjoyed commercial manufacture, is the father of our subject. At the time it was launched, his .475 Linebaugh was arguably one of the hottest parallel wall handgun cartridges around. Intended for that ‘when all else has failed’ moment, when the grizzly is about to reward you for your errant rifle shot!

It was based upon a cut down .45-70 Govt. case and for a brief period was listed by Hornady as a 400-grain XTP tipped product. However, despite a Freedom Arms revolver chambering, it never really caught on. Fast forward to 2001, when Sturm Ruger conspired with Hornady to make further use of their LBGH tooling and production experience to create the first Ruger-branded cartridge – the .480 Ruger, along with a compact revolver chambering to suit. Regular readers will remember the brutal 2.5” barrelled D/A Ruger Super Redhawk Alaskan chambered for the destructive .454 Casull. That’s the model they selected for this little hooligan as well. Not that all was sweetness and light, with well-publicised issues including difficult case extraction. It was therefore unsurprising to hear that in 2009, it was dropped from their range. In 2014, it reappeared in 7½” bull barrel form. Since when, the truncated Alaskan has also reappeared in the Ruger catalogue.

In essence, it’s a de-tuned .475 Linebaugh, a sort of .475 Linebaugh Special. The semi-rimmed straight walled case is shortened from 1.400” to 1.285” and the propellant charge reduced accordingly. Although the nomenclature has changed from .475 to .480, the pill diameter remains the same, at .475”. Indeed, the current Hornady manual quotes loads for the same 325-grain XTP Mag pill for both cartridges. Performance is only marginally reduced from the parent round, typically from max loading velocities of 1450 fps to 1400. However, anecdotal evidence indicates that there is a disproportionate and welcome reduction in recoil – all other things being equal!

Unless you’re a poor rifle marksman, with a fetish for being chased by large angry bears, then the cartridge seems to have little to offer. In common with many of these hand cannon calibres, including the .500 S&W and 460 S&W Magnum, it offers more grunt than group. Just how many rounds will you therefore need in your possibly abbreviated lifetime? But, if you really do feel the need to reload, then the wherewithal exists. Brass from Hornady and Starline, bullets from Hornady, Barnes, Speer and Hunters Supply. Moulds (well, one 400-grain double cavity) from Lee, together with copious powders and primers. Dies from Hornady, Redding, RCBS and Lee complete the inventory. Assembly is straightforward, benefiting from nitride/ carbide sizer dies and crimp cannerlures on the pills. However, with brass at a quid a pop, jacketed pills at £1.50p each and powder at around 20p per round, the cartridge is not cheap to build.

If the lack of UK legal revolvers, or inquisitive bears has not suppressed your desire to use the cartridge, then all is not lost. Lovers of lever action can satisfy their lust with the Rossi Puma chambered for the .480. If that does not light your candle, then you’ll need to search for rifles such as the Ruger No. 1 chambered in .475 Linebaugh, as they will also chamber the shorter .480 Ruger. But ask yourself this… WHY BOTHER?