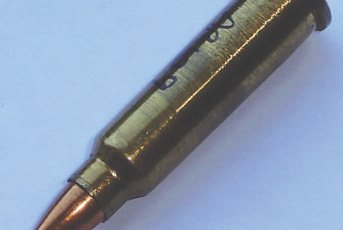 We’ve already looked at one of the notional ‘relatives’ of this cartridge the .22 Hornet. However, the development of the .218 Bee as a performance improvement over the delightful Hornet does defy the ‘power’ logic of the insects after which they’re named. I was stung on the cheek by a hornet during an evening B-B-Q about 10 years ago and it hurt a lot more than the bee stings I’ve suffered.

The Bee was hatched by Winchester as a commercial cartridge in 1938 in concert with a chambering in their Mod 1892 and more commonly, Model 65 Lever Actions. It was aimed at the large and growing varmint/small game market at a time when many American manufacturers were launching new product to improve their share of this volume business. The basis of the design was a necked down iteration of their veteran rimmed .25-20 case (aka .25 W.C.F.).

Cases can also be formed from the .32-20 Win although this gives the neck a tough workout that requires careful annealing before use. Reducing the calibre diameter from 0.257” to 0.224” combined with the decreased projectile length gave a case capacity that offered excellent performance potential from the lighter .224 projectiles. Given the nature of the rifle Winchester designed a safe cartridge based around a 46-grain jacketed flat point. This original factory round gave a claimed 2800 fps, some 15% more than a comparable Hornet.

However, the cartridge was not well received. It acquired an undeserved reputation for ‘average’ accuracy, although in truth it was the modest quality of the lever action rifles that was mainly to blame. The fact that it gave excellent accuracy in the bolt action rifles that followed did little to salvage its reputation. Over the years there have been commercial rifle chamberings from a wide range of makers including Ruger, Kimber, Sako, Browning, Marlin and Thompson Center as well as the Mod. 43 from Winchester. I once saw a Taurus revolver chambered for it too! Nonetheless, the .218 Bee continues to have a loyal following that’s large enough to warrant infrequent rifle chamberings. Ammunition is only from Winchester and that only in 46gn JHP!

This lack of commercial ammo shouldn’t be considered an impediment to the possible adoption of this calibre – indeed, it’s the ideal incentive for the enthusiastic handloader. Of all the cartridges that we’ve looked at so far the .218 Bee is probably the most firearm specific example. If you’re stuck with a tubular mag then safety considerations will provide a frustrating limitation on bullet choice… But DO slug (check the bore diameter) of your vintage lever-action’s barrel to see if .222 (Hornady Jet) or .223 pills could work.

However, for the rest of us there are a range of more than two dozen .224 branded bullets in weights that range from 35 to 55-grains. Propellant speed is in the narrow band best described as very slow pistol/fastest rifle. For UK use the most likely candidates are 2400, H110, Viht N110, my favourite IMR4227, H4198, Reloader 7 and BL-C(2). Small rifle primers need to be considered as an integral part of the design, as the differential pressure effects between standard and magnum and from one brand to another can be substantial. In bolt action rifles, loading the 45/46-grain pill down to around 2550 fps will give remarkable case life. Tools are listed by the top three makers.

Don’t be put off by the British lack of prairie dogs or groundhogs! Whilst the .218 Bee has lost out to the likes of .222Rem, .223Rem and .22-250 in terms of flatness and outright grunt it has a flat shooting bunny range that goes beyond the kill zone of all but the most optimistic marksmen. It’s hotter than my favourite, the .22 Hornet and is still extremely comfortable to shoot.  On the S/H market there are Winchester, Marlin and Ruger examples to be had. If you fancy putting a piece of history back to work then this is a great candidate.