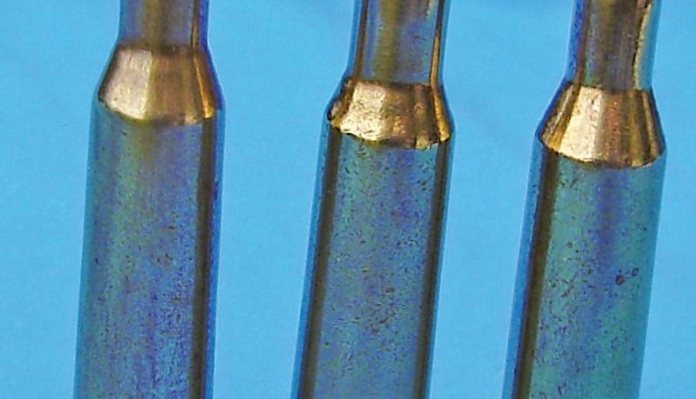 For many years the 220 Swift was the fastest production cartridge in the world and proved the simple motor-sport principle that light weight and lots of grunt can make for great performance. In this instance it was distinctly ‘straight line’ speed only, with corners and trajectories barely on its menu for quite some distance. However, it gained a rep for eating both brass and barrels at an alarming rate. It lost its crown in 2002 to the .223 Winchester Super Short Magnum (WSSM)!

This 1935 bottleneck, semi-rimmed racer was based upon the obsolete 1895 6mm Lee Navy cartridge. As a development project it appears to have been, if such a thing can exist, a commercial wildcat. The raison d’être was simple, to produce the fastest cartridge in the world. But who should really get the credit? The Swift is undoubtedly a Winchester product but the wildcat development work has to be credited elsewhere.

An authoritative book published in 1947 by Charles Landis called “Twenty-Two Caliber Varmint Rifles” gives us a clue. He refers to wildcat work based upon the .250-3000 Savage by, amongst others, Capt. Grosvenor Wotkyns of Frankford Arsenal. Working with J B Sweany, Jerry Gebby and J Bushnell Smith during the 1930’s it is claimed that they initially offered the results of their wildcat .22-250 design (aka .22 Varmint or .22 Wotkyns Original Swift) to Winchester Western in the hope that it would become a commercial product. It seems likely that Winchester had a problem with the source of the parent brass employed in this design and allegedly, worked with Wotkyns on a revised design based upon their own 6mm Lee Navy brass. However, as with anything related to Winchester cartridge history, the truth is lost in the mists of time!

The original cartridge held a .224” 48-grain SP pill and delivered just over 4100 fps from 26” barrel versions of the Winchester Model 54 and later Model 70 b/a rifles. Its reputation as a barrel throat burner was soon established, the result of a combination of factors including modest quality steels, less than ideal propellant materials and excessive heating from rapid fire use. Case life was also an issue – the neck profile contributing to excessive growth and impaired headpsace. Indeed, Wotkyns and L.E. Wilson set about addressing this problem and continued to work on the calibre, introducing their .220 Wotkyns-Wilson Arrow a few years later. It featured a neck angle increased from 21 to 30° which claimed to significantly increase case life. The cartridges are not interchangeable or convertible by fire forming.

NOW MADE TO LAST

Changes in the quality of barrel steels, improved propellants, better bullet design and a more realistic approach to cartridge performance have more or less resolved the wear issues but case life is still modest if loaded to the limits. Whilst Americans take both varmints and small game with the Swift, our Laws sensibly limit its use to extreme range pest control. Whilst it originally had poor reviews for crosswind tolerance, these were the fault of bullet rather than cartridge design. Indeed, it can be a rewarding bullseye cartridge in all but the most testing weather conditions.

A colleague swears by the 52-grain BT HP Match with 43.4-grains of IMR4350 and a BR primer as a real tack driver in his Remy. As a .224” based cartridge the choice of bullets is huge. Brass, tools, powder and data are not a problem. Suitable rifles are not plentiful but can be found for under £500 from Winchester, Ruger, Savage, Browning and Remington amongst others. Blaser have also chambered barrels for it. For the collector of rarities, the 220 Swift was one of only a very few calibres chambered in the battery-powered Remington Model 700 EtronX rifle with its claimed ‘near zero lock time’ of .0000027 seconds! I’ve not seen the special electronic primers in the UK but they were available for reloading use in the ‘States, at a price!