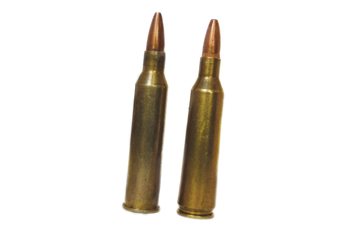 Not every new factory cartridge goes on to be a star. This month’s subject was born a potential winner in 1964 but was overtaken by events. Nonetheless, it still has an enthusiastic and loyal following. The 1935 Winchester .220 Swift was the catalyst for the design and launch of this cartridge. We’ll look at the Swift in due course but to summarise, it became famous for not only its awesome muzzle velocity but the speed at which it lunched on barrels.

We’re discussing the semi rimmed .225 Winchester. It was designed to be a replacement for the .220 Swift, offering almost comparable performance but without the issues of wear and tear. It hit the market supported by a couple of re-chambered variants of the evergreen Winchester Model 70 bolt action rifle. It was crafted to make rifle re-chambering for the .225 Win as easy as possible, the rim being identical in size to the .30-06 and styled to feed like a rimless cartridge from a conventional box magazine. The elderly .219 Improved Zipper case was its parent, the family resemblance being extremely close.

Performance was impressive, the 55 grain pill exiting at a little over 3600 fps. It offered long range flat shooting for varmint and small game hunters up to 250 yards. Accuracy was really impressive. Trashed barrels seemed to be a thing of the past. The .225 was set to have a storming future.

Things looked good for the newcomer for almost a year. However, it was then trumped by Remington who made the commercially astute decision to ‘legitimise’ the well known and respected .22-250. The performance of the two competing cartridges was virtually identical. It was almost inevitable that, with a Browning rifle already in the stores and a new chambering in the Model 700, the .22-250 would rapidly eclipse the fledgling .225. Other leading rifle manufacturers elected to offer chamberings for the .22-250 leaving the .225 Win more or less isolated. Savage were the only other volume producer to offer a chambering, with a tiny number of custom Carcano and Steyr-Mannlicher rifles doing little to bolster the market.

END OF THE CENTURY

Winchester ceased production of .225 rifles in the 1970’s. Ammo production became sporadic, as did the issue of new brass. Indeed, I cannot find any record of batch production since the turn of the century. Batches of cartridges and brass appear on the collector web sites from time to time, and my spy in the ‘states tells me that it still occasionally turns up on the shelves of rural gun stores. John J Donnelly in his Handloaders Manual of Cartridge Conversions (Stoeger Publishing) tells us that the case can be formed from a necked down .30-30 Winchester (RCBS offer a conversion die set) or from the original parent, the .219 Zipper.

HISTORY IN THE MAKING

Previously loved rifles are out there, mostly in the USA but also in Europe. Prices are low enough to take a punt on this becoming a more valuable collectable in the future. Keeping it fed may become the exclusive domain of dedicated handloaders but that only adds to the value. Die sets are still listed by Hornady and RCBS. Stock .224 cal bullets are listed by every popular maker in weights ranging from 40 to 70 grains. Factory duplication comes from the 55gn Spitz-SP over H380 or IMR 4350. This is a cartridge that has already moved into the history books, for the wrong reasons.